The Japanese car maker Nissan is streaming a 15-second anime commercial for its collaboration with the One Piece anime series.

Nissan created a one-of-a-kind decorated vehicle (itasha) to celebrate the November 29 launch of the redesigned Nissan Serena minivan. The "Thousand Serena" itasha features many of the details from the anime's pirate ship Thousand Sunny, such as the (two-dimensional) lion figurehead on the hood, the skull-and-crossbones fore-mast sail's design on the roof, and the signature soldier-dock system on the sides.

Koda Kumi will be releasing a photobook celebrating her 10th anniversary in the entertainment industry titled KODA REKI. The release date is planned for Feburary 2011. It will have 160 pages and be priced at only ¥ 1,500.

It's been revealed today that techno-pop trio Perfume will be releasing a DVD of their Tokyo Dome concert 1 2 3 4 5 6 7 8 9 10 11 on February ninth next year. Celebrating their ten years together as a group and the fifth anniversary of their major debut, the November third concert was Perfume's first ever at Tokyo Dome.

Though already broadcast on WOWOW last month, the DVD will contain performances cut from the TV version (such as the highly anticipated "575"), as well as differing camera angles, etc.

Rejoice and be merry, Perfume fans! Hayao Miyazaki's Son Goro Miyazaki to direct Summer 2011 anime about high school girl in 1963. The manga is set in 1963 in Yokohama, Japan. The main character, Umi Komatsuzaki, is a high school girl who has to grow up quickly when her father goes missing.

The film journalist Hiroo Otaka reported on his Twitter account that Studio Ghibli announced its newest work, Goro Miyazaki's anime adaptation of Chizuru Takahashi and Tetsurō Sayama's Kokuriko-Zaka Kara manga, on Wednesday. The anime will open in Japan next summer.

The story is set in Showa 38 (1963, a year before the Tokyo Olympics) and follows the coming of age of an ordinary, pigtailed high school girl named Komatsuzaki in Yokohama, a harbor city near Tokyo. Her sailor father went missing after an accident, and her photographer mother is frequently going abroad for work. Her family now runs a lodging house The manga recounts Komatsuzaki's everyday life of "laughter and tears" with two boys — a school newspaper member and the student council president.

Goro Miyazaki is the son of Ghibli's co-founder, Hayao Miyazaki. The younger Miyazaki had previously directed Tales from Earthsea (Gedo Senki). The older Miyazaki is planning the Kokuriko-Zaka Kara film and co-writing its script with Keiko Niwa (Gedo Senki). Satoshi Takebe (theme song arranger on Deltora Quest, Romeo × Juliet, The Story of Fifteen Boys) is composing the music. Ghibli's former president Toshio Suzuki is producing the film as he has for almost every Ghibli project.

The original manga ran in Kodansha's Nakayoshi shōjo magazine in 1980. Studio Ghibli's publishing department and Kadokawa Group Publishing re-issued the manga this past July with a new wraparound jacket band that says that "Hayao Miyazaki recommends this!" Ghibli's sales blurb added that the studio was looking into whether the shōjo manga could be made into a movie.

The first work was this year's Karigurashi no Arrietty from first-time director Hiromasa Yonebayashi. The second work is Kokuriko-Zaka Kara, with which Suzuki says that Goro Miyazaki will demonstrate his "true worth" since his first film involved "beginner's luck."

Suzuki did not specifically say if there will be a third work by a young creator next year, nor how many "epics" will be made in the last two years of the five-year plan. Suzuki did say that Kokuriko-Zaka Kara is in the final stage of storyboarding.


"Himitsu" is included in Maaya's newest album "You can't catch me" releasing on January 12th, 2010. "Himitsu" is composed by Shibata Jun, with lyrics written by Maaya herself.

OMG GORGEOUS! Want to desperately make millions of icons of this PV.

Rock band androp has uploaded a digest version of their one-man live "angstrom 0.2 pm" at LIQUIDROOM Ebisu on October 23rd to their official YouTube account.

Performed during the set were two tracks from their upcoming album door, "MirrorDance" and "Puppet" -- given that androp consistently sells out their tickets on the first day of sales, as well as the new songs that were played during this live, this clip could be considered a nice gift to their fans.

Following the February 16th release of the album, which will be the first of their CDs to come in both normal and limited editions, the band will begin their country-wide one-man tour "angstrom 0.3 pm" starting in May. The fifth and final performance of the tour will be given at SHIBUYA-AX in Tokyo on May 28th.

The music scene was very exciting in 2010. BIGLOBE MUSIC held their “BIGLOBE MUSIC AWARDS”, BIGLOBE MUSIC and BIGLOBE Search paired up and the nominations were of artists who were looked up often. BIGLOBE’s site had users vote from December 3~December 13th. In addition to votes cast, artists got points from users who accessed them through BIGLOBE MUSIC. We are now announcing the winners of the 4 categories: Best Artist, Best New Artist, Best Single and Best Album.

Naka plays Toake, a successful manga artist who, despite her beauty, has no boyfriend due to her busy career. A friend invites her to a party full of good-looking men, and she begins to imagine romances with each of them.

The drama is being directed by filmmaker Isao Yukisada ("Parade," "Sekai no Chuushin de, Ai wo Sakebu"). This is Yukisada's second mobile drama, having worked on the "Onnatachi wa Nido Asobu" series that was distributed through BeeTV earlier this year. That show got a total of 13 million downloads, and it was later screened in theaters as a single movie.

Not jealous at all. Story sounds stupid though xD

※来年春のリリースを予定しております。詳細は決まり次第、お知らせいたします (We plan to release next spring . More information will be announced soon)

☆free ☆for ☆all
Welcome to the weekly FFA/off-topic/random post.

→ All community rules still apply in here. You can post 5 pictures & 2-3 gifs depending on the size(use your own judgment) per comment. We don't want the page loading slow.

→ The FFA will always be posted Friday 3-4PM EST (Toronto time). If you need any help with time zones click here


It looks like it's going to be a slow week next week, apart from Ayu's new album and her collab with NAOYA. As you can see, there's no 8th-10th place in the single rating, which indicates very low NINKI for every other new single. This could mean there's a high possibility that a lot of the top 10-ers this week (and some from last week) would stay in the top 10 next week AGAIN. We might also be looking at very low sales in the upcoming week (apart from Ayu), so be prepared! Of course, we might also be getting a surprise or two in the bag...XD

“The biggest difference we saw was the emphasis that Japanese women place on human relationships – in particular they care about being liked by others – while the women in the other cities are more concerned with personal growth through their work or studies,” said Sakae Nomura, director of Kanebo’s Beauty Research Institute.

According to the survey, which covered around 450 women between the ages of 18 and 59 in the five cities, women in Tokyo place more emphasis on personal relationships and achieving a work-life balance, while the women of the four other cities want a high income and “personal development.”

When asked what sort of person they wished to be, Tokyo women most frequently replied “someone who is considerate to others.” Their counterparts, however, tended to reply they wanted to be “cheerful” and “feminine.”

Tokyo women use makeup more frequently and extensively than their counterparts, the report identifying that 79.5 percent of women apply makeup five days a week. That figure fell to 38.7 percent in Shanghai, 44.5 percent in Beijing, 45.1 percent in Taipei and 58.7 percent in Seoul.

Read more in the Independent and the WSJ.

I choose Nino for obvious reasons. 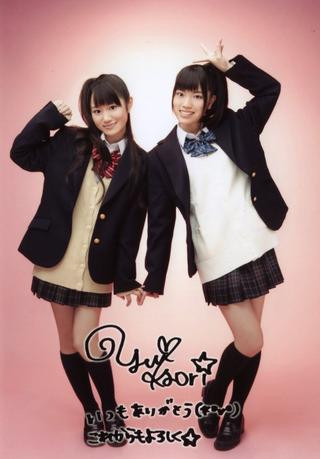 A new single has been announced for the KisxSis duo, their fourth. The release date is still unknown. Additionally, the girls have gotten a manga serialisation in the magazine Seiyuu Animedia (声優アニメディア). It's called Yuikaori no Hamster House (ゆいかおりのハムスター☆ハウス) and kicked off on the 10th December. For one final piece of awesomeness, they'll even be starring in their own stage play entitled Q - Anata wa Dare? (Q ―あなたはだぁれ？―), which will run from the 30th March until the 6th April next year.