The covers & Previews of the Buono New single has been released!

Single is out February 16th.

Actress Erika Sawajiri (24) held her press conference at the Takano Yuri Beauty Clinic event on Sunday, though she did not take any questions from the press. During the event, she tearfully announced that she and her husband, media creator Tsuyoshi Takashiro (46) have mutually agreed to get a divorce.

According to Sawajiri, the divorce procedures are already in the final stages. There have been rumors since last year that the two would likely split up, though a couple months ago it appeared that they might be getting back together. However, it seems that her meetings with Takashiro were primarily to settle the divorce.

Sawajiri stated that she currently has no work scheduled, though she affirmed that she strongly wants to return to acting. However, a commercial contract is in the works, with more details expected to be announced at another press conference on February 28.

Popular idol AKB48 is expected to have another million shipped for their latest single, [Sakura no Ki ni Narou], a ballad graduation themed song that will be released on the 16th February.

Preview of the song

Japan's latest death-game movie plays by its own rules

Pretty POWERHOUSE trauma face
Films about murder games of various sorts have become a popular Japanese-movie subgenre, beginning with the ultra-violent Kinji Fukasaku hit "Battle Royale" (2000) and continuing with the even more successful "Death Note" trio of films (2006-2008) — though the "game" in the latter was more of a battle of wits between the killer hero and the candy-addicted private detective hired to stop him.

Most of these films are thrillers with a thin overlayer of commentary about the dire state of society. Aiming for a semblance of realism, psychological or social, they usually end up looking contrived, since the "game" is rigged from the beginning to ensure the survival of the leads.

Shinsuke Sato's "Gantz," the first of two films based on a popular manga by Hiroya Oku, stands the "murder game" formula on its head — or rather twists it in ways provocative and strange..
-------------

I don't like it when my baby over-squints. Over used acting technique and we don't want premature wrinkles on that money-maker eyes don't we? The world premiere of the live action movie, "GANTZ" came out last night here in the states. I was at one of the 300 theaters watching the film for the first time. Let me just say the movie was AWESOME! The dub was meh but the movie itself was great. Can't wait for part 2!!

In LA there was a world premiere event with the two stars of the movie, Ken'ichi Matsuyama & Ninomiya Kazunari which was broad casted live throughout all the theaters showing the movie. I decided to use my ninja skillz and video tape the whole post movie Q&A with my handy dandy blackberry. The quality isn't HD but it's clear and you can hear everything.
( Collapse ) Source: Asian Pop Addict

Rebellion and dissent are not usually associated with conflict-averse Japan, where wa, or group harmony, is king. But the stakes in the battle of the anime industry versus the Tokyo metropolitan government over Bill 156 have risen conspicuously over the past few weeks, and cooler heads are hard to find.

Tokyo Gov. Shintaro Ishihara's successful passage last month of legislation targeting manga, anime and video games for vaguely defined "morally offensive" imagery has been recorded in this column, as has the strikingly vehement opposition to the bill on behalf of artists, publishers, producers, translators and fans, many of whom question Ishihara's motives.

The bill does nothing to address the production or possession of live-action depictions of rape or child pornography. After failing to pass it last summer, Ishihara and his ilk rushed the vote in December without once asking industry leaders or artists to discuss or compromise on the issue.

ANN: What was your first thought upon being approached with the opportunity to play Masaru in an adaptation of Gantz?

MATSUYAMA: I was excited about the offer and decided to accept because this film is based on a manga that is not an ordinary sci-fi action story. It incorporates elements of drama like the bond between Kato and his little brother as well. Also I was glad to hear that Mr. Ninomiya would be playing Kei Kurono and I would have the opportunity to work with him.

Do you have a dream project? Is there a manga hero you'd personally love to play?

Singer Superfly has announced that she will commence her 2011 activities and that there will be 3 major events.

First, she will be doing a special live broadcasted nationwide on FM52. Second, she will release a double A-side single with a movie tie-in. Finally, she will embark on a nationwide tour, where she will do 35 shows in 32 cities.

The nationwide broadcast is called “National Broadcast FM and KDDI present MEET THE MUSIC LIVE with Superfly”, and will take place on March 20 from 7 PM – 8 PM. Her new song, “Sunshine Sunshine”, will be used as the campaign song.

The Meet the Music Live campaign is an effort to revitalize FM radio in Japan. Previously, artists such as Kuwata Keisuke, Kobukuro, and Remioromen have been featured on the show, who decided to feature Superfly for a 1-night special live.

Four-piece band "BUMP OF CHICKEN" will be releasing their new song "Tomodachi no Uta" on February 23rd. The song has been selected as the theme song of the movie "Doraemon Shin-Nobita to Tetsujiniheidan ~Habatake Tenshitachi~" which will be released on March 5th.

A variety of artists, including Yazawa Eikichi, Ayaka, Yuzu and others have sung the theme song of Doraemon's movie previously. When the new song was released on TV on December 17th last year without the name of the artist, it had gained a lot of attention.

The new song was written based on "Nobita's illustration" by vocalist Fujiwara Motoo, who has been "a big fan of Doraemon since his childhood". "I want to be Nobita", said Fujiwara. "I was so happy have received this offer by 'Tetsujinheidan' which I love a lot." It also seems that his favorite Doraemon tool was the "Ishikoro Boshi (stone hat)" which supposedly helps people to become transparent.

The heartwarming lyrics of the song have also been used as a catch copy for the movie version. "I'm really looking forward to watch it in the cinema." Fujiwara expressed his expectation.

The song will be on air today in the program "SCHOOL OF LOCK!" on TOKYO FM.

The NINKI ratings are the results of a poll conducted by Oricon indicating interest in an upcoming release. Although the ratings are never a true reflection of sales, it does give a strong prediction about where the single/album will place in terms of popularity amongst the Japanese public. However, they are NOT an indication of how it will perform in terms of chart positioning and total sales for the week.

Oricon used to poll around 400 of its members for NINKI ratings, but since some popular artists have had NINKI exceeding 500, we can only assume that Oricon has extended the polling to around 600/700 people now.

'what's flumpool?!' cm set the bar too high for their future cms.

☆free ☆for ☆all
Welcome to the weekly FFA/off-topic/random post.

→ All community rules still apply in here. You can post 5 pictures & 2-3 gifs depending on the size(use your own judgment) per comment. We don't want the page loading slow.

→ The FFA will always be posted Friday 3-4PM EST (Toronto time). If you need any help with time zones click here

Last year Namie did a record breaking 80 tour stops on her “namie amuro PAST < FUTURE tour 2010.”  This year the tour will kick off on May 21st and 22nd at the Makuhari Messe Event Hall before heading out to for a total of 36 performances in 15 different venues across Japan.

Namie has also recently announced her first collaboration album for March 23rd.  2011 is already shaping up to be quite an exciting year for all fans of the R&B vocalist’s work.

Another long-running television show is coming to an end this spring. NTV's talk show "Koi no Karasawagi" (also known by the title "Much Ado About Love") will be taken off the air at the end of March, 17 years after its debut in April 1994.

Just last week, it was revealed that TBS is ending "Tokyo Friend Park II" after an 18-year run, counting its predecessor "Tokyo Friend Park." Like that show, "Koi no Karasawagi" once enjoyed high ratings, but its numbers have significantly declined. After frequently dipping below 10%, it was moved from its long-established Saturday 11:00pm time slot to its current slot on Fridays at 11:30pm, but ratings remained in single-digit territory.

Hosted by Sanma Akashiya (55), "Koi no Karasawagi" features a cast of women discussing love-related issues. The cast is currently in its 17th generation, and the show never held a recruitment process for a new generation for the upcoming year.

"Koi no Karasawagi" also spawned a series of drama specials called "Koi no Karasawagi: Love Stories," which aired once a year between 2004 and 2009. After "Love Stories IV" in 2007, which starred Maki Horikita, Satomi Ishihara, and Asami Mizukawa, ratings dropped sharply from double digits to the mid-single digits in 2008 and 2009. 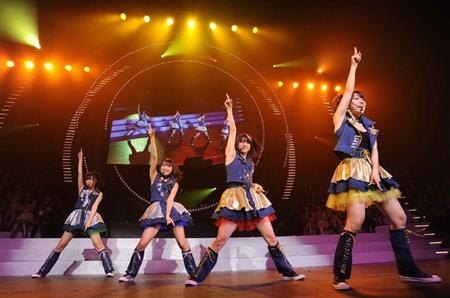 Idol group AKB48 held the 2nd day of their concerts “AKB48 Request Hour Set List 100 2011” on the 21st at Tokyo’s SHIBUYA-AX. It was there that they had a surprise announcement; a new 4 member unit called “Not yet”.

During the encore they caused a big commotion. Last June fans voted in the “2nd Senbatsu General Election”. Oshima Yuko (22) placed 1st in the election, Kirahara Rie (19) placed 16th, Sashihara Rino (18) placed 19th and they’re the members of the new unit. Sashihara giggled while introducing her new unit, “We’re a unit whose general election average is rank #12 . I can’t deny how nice it is to work with Oshima Yuko”.

5 AKB sub-units have had their major debut. No Sleeves’s first album ranked #1 on Oricon’s weekly ranking and French Kiss’s newest song came in 1st on the daily ranking. Oshima then called out Yokoyama Yui (18) who was just promoted from Kenkyuusei (Research Student) last October, “We have one more member to introduce”. These 4 girls performed their debut song “Shuumatsu Not yet”, which will go on sale March 16th. Around 1,000 people were gathered and loudly cheered for them. 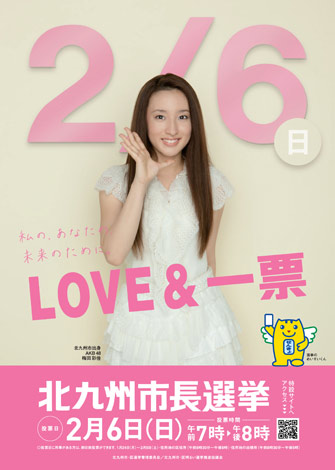 AKB48’s Umeda Ayaka is from Kitakyushu and has been selected as their PR character for the Kitakyushu mayoral election on February 6th. She addresses people to “LOVE & Vote” on her advertisement posters and CMs

Umeda Ayaka is from Fukuoka’s Kitakyushu. She passed the “2nd Generation AKB48 Member Audition” in 2006 and has been a Team K member since then. Due to a serious leg injury she had to withdraw from the group for some time, during that time she appeared on Fukuoka TV programs while she devoted herself to rehabilitation. Her love for her hometown is twice the amount of other people.

Umeda’s picture can be seen on billboards in 17 places, including the city hall and ward office. 4,000 posters of her are pasted on buses and the monorail. Leaflets of her are also enclosed in tissue and hand warmer packets, it’s a big campaign. She posted in her blog, “Ever since I debuted, I’ve always wanted to do work in my hometown, so I’m extremely happy (´・ω・｀)!!! Thank you so much (つω`)”.

Umeda’s catchy slogan “LOVE & Vote” TV CMs will begin airing on the 28th. The “Memories” CM will have pictures of her from her childhood as she looks back at the memories of her hometown. The “Don’t forget” CM will feature her with the election character, Meisui-kun. The “Basket” CM will start airing on the actual Election Day (You can see it earlier on the official site). On February 2nd Umeda will participate in an event as the “Election PR Commanding Officer” at JR Ogura Station’s JAM plaza.