Some Arashians got their ARASHI 10 11 TOUR “Scene”～君と僕の見ている風景～ STADIUM DVD earlier than the release date which is Jan.26th.

Fujitsu has decided to make a series of 109 brand-based cellphones with original style. The cellphones will be marketed by DOCOMO.

The F-04C mobile phone models have been designed in collaboration with three fashion brands: CECIL McBEE, Pinky Girls, and COCOLULU from Tokyo’s “SHIBUYA109″ department store building, which is enormously popular among teenage girls. Each brand’s mobile phone handset features a completely original design, ranging from the phone’s color scheme and keypad to its exterior design and detailing. The mobile phone is also loaded with a variety of exclusive content, including Kisekae Tools and Deco-mail pictograms.

Each mobile phone model comes in its own unique package exclusive to the style of each respective fashion brand, and includes an original limited-release shopping bag and a stylus for writing on the phone’s screen.

Acid Black Cherry has just updated his official website with some exciting news!

Although very little information was divulged, a new single titled “Shoujo no Inori III” has been confirmed for a March release. Additionally, Acid Black Cherry is going to throw a special event - “Thanks 4 You ABC Dream Cup 2011″ – as a thank-you present for all the support fans have been giving over the past four years.

There’s a lot of buzz surrounding the event, as fans are speculating that it might be a reunion of Acid Black Cherry’s previous band, Janne Da Arc, which went on an indefinite hiatus back in 2006.

What do you guys think? Song is growing on me, but there are certains bits I just don't like

Moran has released the tracklist for their upcoming mini-album, Apples. For those that don’t remember, the mini-album is comprised of songs written by ex-bassist Zill before his untimely death. Those songs have finally been recorded and will be released as a memorial to Zill and to open a new chapter for the band. The release is set for March 23rd for 2,625 yen.

Television personality Imalu appeared with SpongeBob SquarePants during a promotional event to promote a tie-up between the American cartoon character and McDonald’s Japan in Tokyo on Thursday.

‘‘SpongeBob was on television all the time (in Canada), so I naturally became a fan,’’ said the 21-year-old who attended high school in Canada. Her parents are comedian Samma Akashiya and actress Shinobu Otake.

The event kicked off a campaign to promote SpongeBob in Japan, where toys featuring the character will be included in McDonald’s Happy Meals for the first time starting Friday.

Majisuka Gakuen 2 is confirmed, the official site is already up on TV Tokyo
( Collapse ) 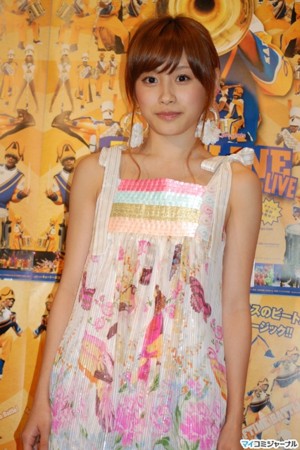 Takahashi Ai (24), the leader of Morning Musume who will be graduating, will be in a musical next fall. The musical is called “Dance of the Vampires” (Tokyo’s Teikoku Theatre, November 27 ~ December 24). She will play the heroine Sarah and will be double cast with Chinen Rina (29). “I like vampire stories and I even had a dream of drinking blood (Haha). I’ll do my very best”.

With the 4th day finished, the Top 100 is revealed:

SMAP’s Tsuyoshi Kusanagi (36) said it was the best day of his life when a member of Japan’s Imperial family congratulated him in person on January 20 in Tokyo, reports Daily Sports and Sankei Sports.

It has been reported Her Majesty the Empress Michiko watched Kusanagi’s movie “僕と妻の1778の物語 (Boku to Tsuma no 1778 no Monogatari)” with the pop star and actress Yuko Takeuchi at a theatre yesterday, and had a chat with him afterwards.

“She complimented me on the movie and my acting. It was the best moment I’ve had since I was born. I was so happy!” Kusanagi said.

It has been reported Her Majesty had already known a few things about Kusanagi and asked him questions like, “you must be very busy working in SMAP”, and, “how long have you been studying Korean?”.

Kusanagi was still overwhelmed when he had talked to the press after his meeting.

“She was very kind and warm-hearted, and she makes you feel at ease. I have to tell the others (in SMAP),” he said.

His co-star Takeuchi had said she was equally excited.

“It was like a dream, I can’t believe it really happened. I feel extremely privileged to have had this opportunity,” she said.

The two had also asked Her Majesty if they could shake her hand.

“I don’t want to wash my hands now,” Takeuchi said.

The special drama for “Kinpachi Sensei“, starring Takeda Tetsuya as a teacher, will be broadcasted on TBS by the end of March. With that special epiode, the series will come to an end after a miraculous 32 year run.

The first season of the school drama was broadcasted back in 1979, and there are have been 12 special episodes for the series since then.  The drama featured many social issues from the respective time periods, such as pregnancy, bullying, gender identity disorders, drugs, and a lot more.

The best fictional teacher in Japan, I'll miss this drama. The drama that gave Aya Ueto her career. 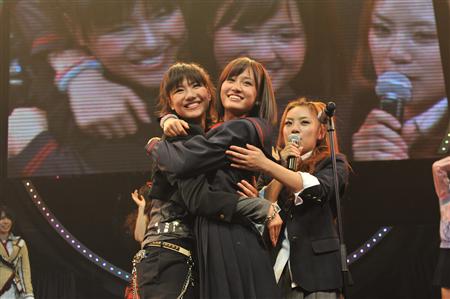 On the 23rd, AKB48 announced at Tokyo’s SHIBUYA-AX, that they all would participate in TV Tokyo’s “Drama24 Majisuka Gakuen 2”, starting in April.

It’s the sequel to last year’s cool “Majisuka Gakuen”. The members will play tough Yankees. It is a story of the girls becoming friends through power struggles. It’s a promise that there will be action scenes with the girls in sailor uniforms. Last time, the strongest student was played by Maeda Atsuko (19), she announced, “This time I’ve power-upped”. Last time, there were around 60 people participating, including Kenkyuusei (Research Students). This time they promise a scale-up from before, “This time we’re going to exceed that number”.

On Sat Jan 22, JE announced via fan club e-mail that there will be a handshake event (1/23 Sunday) at Sunshine City World Import Mart Building starting from 9AM until 1PM.

You must buy a copy of the new CD for a ticket to this event. The CD sale starts at 8AM.  The cost of the CD is 525 yen. 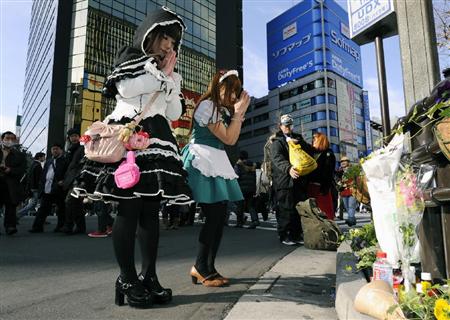 In June 2008, a random massacre happened and caused the Pedestrian Mall to be closed. However on the 23rd they announced that after 2 years and 7 months, the Pedestrian Mall would re-open. It’s been a long time since 100,000 people were able to enjoy “Akiba’s Pedestrian Mall”. They will be having a testing period until June and it will be open every Sunday starting at 1pm.

Before re-opening, there was an opening ceremony next to the place where the actual incident happened. Local residents and administrative people had a 30 second silent prayer for the victims. Afterwards, they revived the Pedestrian Mall at 1pm. Shoppers and tourists stood and waited for the walkway to be open and when it was, the walkway was completely covered.

When the walkway was opened, a male started shouting and was arrested. He resisted arrest and caused a scene, but other than that there weren’t any particularly big problems.

In order to promote her newest single, Mano will be holding two special events consisting of a small performance and a handshaking session. The first event will take place on January 29th in Tokyo’s Mediage building, where fans can purchase the regular edition of her  “Seishun no Serenade” single. Those who receive a ticket from the handshake event will have entrance priority to Mano Erina’s mini-live, which will have limited seating.

The second event will be held on January 30th at Venus Fort, but no other details have been officially announced. 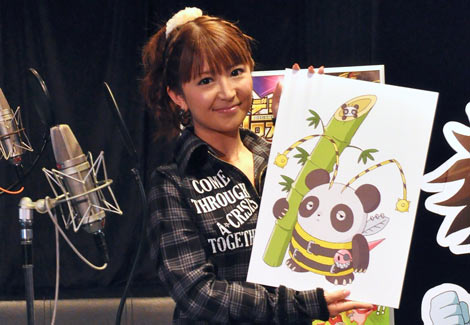 Talent, Yaguchi Mari, personally designed the new character Panbachimon for the anime “Digimon Xros Wars” (TV Asahi, Every Tuesday, 7:27). She will naturally voice act as well. After dubbing she showed her excitement at entering a new field, “I love anime, so I can’t help but want to become a voice actress. I’d like to take this chance to walk down the voice actress path!”

Non-existent haters to the left

An NTV reporter visits a department store and Tokyo to see belly warmers (haramaki) for men, which are supposedly one of this year’s popular new fashion items:

Some of the belly warmers have colorful designs, and one is also marketed as being also useful as a neck warmer or hat.

Open to: All, detailed results viewable to: All. Participants: 357

The last of the currently active groups of H!P has finally opened their official youtube account and posted a video message about it, it currently host their 11 single pvs but the girls promised it will soon be filled with close ups, dance shots and more!
( Collapse )
source 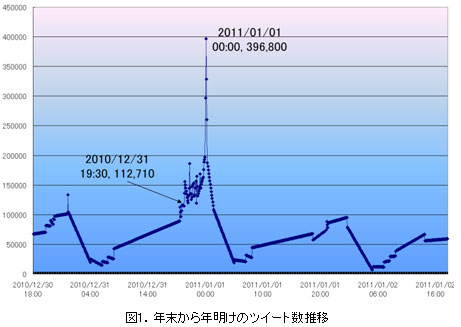