Japanese musician Miu Sakamoto, who is probably known for being the daughter of legendary musician Ryuichi Sakamoto and also Akiko Yano, revealed via Twitter that she will release her seventh album on May of 2011. Exactly a year after releasing her sixth studio album "Phantom Girl" in May 16th of 2010. The new album, like her previous one, will also be a collaboration with Chinese-American producer Dave Liang. Who is known for being the mastermind behind The Shanghai Restoration Project. He has also worked with other Japanese artists such as MEG and Emi Meyer.

Miu Sakamoto actually confirmed the new album via Twitter personally to me. As I wrote in my blog about her, and sent her a Tweet to check it out. She read the post, thanked me, and announced the new album! SO YES ARAMA, consider this ~inside exclusive news~! I still can't believed she replied to me. ;_; I can die happy. Phantom Girl was pure bliss, she makes a great team with Dave! So I can't wait for how the new album will sound like! Anyways, here's her PV for "Phantom Girl's First Love" for those who haven't seen it. :'D Just to give you guys a taste of what the new album may sound like~

Oricon Style announced that AKB48’s 18th single, “Beginner” (released in October 2010),  has reached sales of 1,001,000 copies after including the sales of the latest Oricon Weekly Chart for January 31st.

This is AKB48’s first single that has totaled a million sales since their major debut in 2006, and “Beginner” is the 243rd single with a million sales in Japanese singles history.

As we reported earlier,”Beginner” sold 827,000 copies during the first week of its release, and thus, AKB48 has beat the existing record for a female group achieved by SPEED’s single, “ALL MY TRUE LOVE” (released in October 1998), which sold 601,000 copies in the first week over 12 years ago.  It even exceeded the best record of this century for the first week single sales, which was set by Utada Hikaru and her song, “Can You Keep A Secret?” (784,000 copies sold in the first week).

Source
Japanese asked what remarks they find the nastiest and most likely to wound a woman’s pride provide a helpful list of what never to say to a woman (or, for unkind types looking to do serious damage, what to say…).

because we're so classy like the mothership and our last original poll went over so well, we're having another one! didn't like who was nominated and won back during the japan record awards? well, here's your chance to correct that wrong and nominate your picks for arama's version of ontd's version of the grammys.

rules of the game
1) Artist - Song Title/Album
this is real simple. i am not JASRAC so i don't know every song. please specify.

2) Nominations must have been released between December 1st, 2009 - December 1st, 2010
NO EXCEPTIONS. Confused? Please go to Wikipedia/Amazon/Artist Website to confirm release date.
(yes, if it was released in japan and was ranked on the domestic oricon charts - it counts)

3) Know your genres. Shiina Ringo is rock, ARASHI is pop, Amuro Namie is R&B/Rap, etc
Nominees in the wrong category will not be counted (ie: ARASHI in R&B/Rap because they released a single that has Sho rapping all over it).  Can't figure it out? Go to their wiki, it lists their genre.

you are allowed to vote three times.

Have fun! Nominees announcement and voting will begin on February 1st, 2011! Results will be announced on February 13th, the night of the Grammys!

have any questions? comment below and you'll have an answer.
( Collapse )

The word “otaku” is now quite common, even outside of Japan. (Just in case you don’t know, here is the link to Wiki) There are many otaku people in the world, and it is not unusual to see otaku couples as well.  According to a survey for women who have otaku boyfriends, there seems be many advantages being the girlfriend of an otaku person.

[1] Unknown world
“My boyfriend had me memorize lots of names of game characters. It was hard in the beginning, but now I’m addicted to the game world”
“I’ve learned many things about the unfamiliar otaku world. Fun!”
You can gain new knowledge from your otaku boyfriend.
[2] Fresh date ideas
“I went to a comic market for the first time. That was so exiting!”
“Full-sized Gundam was quite impressive!”
You can visit strange places with your otaku boyfriend.
[3] No affair
“Otaku boys are pure and single-minded, and can’t be flirts. I don’t have to worry about it.”
“If otaku boys cheat on me, it happens in the second dimension (not with real girls). “
You can trust your otaku boyfriend completely!
[4] Same interests
“I am otaku too, so we can enjoy the same things.”
You can be deeply absorbed in the otaku world with your boyfriend!
[5] Lots of knowledge and fun conversations
“I am never tired of conversations with my otaku boyfriend! The range of subjects is limited, though.”
“Otaku people are very enthusiastic. That’s respectable.”
You can have great fun talking to your otaku boyfriend!
[6] Respect for your sense of values
“I’m otaku, but my field is different from my boyfriend’s, and each of us has an inviolable territory. We each respect the other’s interests.”
You can feel comfortable with an otaku boyfriend who respects your individual tastes.
[7] Well-informed
“He knows much about electronic products and found the best cellphone for me.”
“My boyfriend has plenty of know-how.”
You can ask him anything about his specialties!
[8] Trustworthy
“He is a computer otaku and my only help desk staff.”
“My boyfriend hand-built a computer.”
You can solve your problems very quickly and properly if they are in his otaku field!

What about you? Arama? Do you want an otaku boyfriend or girlfriend?

Open to: All, detailed results viewable to: All. Participants: 749 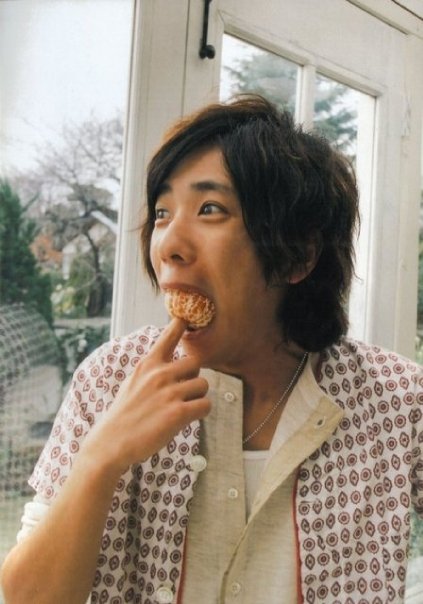 In one, the pop star is talking about JCB’s 50th birthday, and in another he talks about some porcupine fish trivia.

( Collapse )
source: tokyofever & youtube"Ob
Better watch it before it gets removed!!!

TOKUMAJAPAN
Japanese women share what they consider the best ways to persuade, pressure and in some cases outright trick a man into marrying them, displaying the expected Machiavellian guile as well as some quite traditional or even sweet sentiments.


The ranking, with the percentage of women agreeing with the method:

The three members of KARA have finally revealed their demands in their contract adjustments with DSP Media, with the two main points being to shorten the contract time and having a modification in the board of directors.

With the three members having a contract that still lasts another 3-4 years, the trio has demanded their contracts be shortened to July of 2012 instead, as they would like to end their contract at the same time their contract with Universal Japan ends. They have also requested a more professional management team, as well as a transparent accounting system.

In addition, the three have requested for the resignation of the wife of CEO Lee Ho Yeon, who had been his replacement since last year after he fell into a coma. The trio would also like for a new system, whereby their legal representative could participate in the group’s accounting and contract audits.

It was later announced that DSP Media would agree to only partially meet their demands. A representative stated, “Isn’t demanding a shortening of their contract and a change in directors a bit too much? For reinforcing the management team and making a transparent accounting and contract system, if the members are willing to come back and discuss further, then there are possibilities that they can be partially accepted.”

Also a new song "Jet Coaster Love"  is featured in a new CM for Men's TBC.

And their drama URAKARA had ratings of 1,7% in its 2nd episode.

Ikuta had been recognized for his work in “人間失格 (Ningen Shikkaku)” and “ハナミズキ (Hanamizuki)” and is the first Johnny’s talent to have won a Blue Ribbon in the agency’s history.

“This award means a lot because it was given to me after spending a long time trying to find something that no one else had done.” he said.

Having joined Johnny’s around the same time as Arashi’s Jun Matsumoto, Kazunari Ninomiya, Masaki Aiba, and NEWS’ Tomohisa Yamashita, it has been reported Ikuta said it had not been easy to establish himself as an actor while everyone around him was working in the music industry.

“There were times I’d thought about quitting, but my love for acting and wanting to learn more about it was what kept me here.  No one had established themselves as an actor, so around the time I was graduating from high school, I set my heart of going down this path.”

Ikuta had said from then on he went to see stage plays and movies every week, and even traveled to the UK and Germany to study stage acting.

After reporting to “Ningen Shikkaku” movie director Genjiro Arato about his win, it has been reported Mr Arato had told Ikuta, “You got the best prize.”

Now as an actor, the Johnny’s talent said he could laugh about his struggles.

“What’s the difference between me and them (Johnny’s pop groups)?  The fact that I don’t have a song to call my own at karaoke (laughs).”

The award ceremony for the Blue Ribbon Awards will be held in Ginza, Tokyo on February 15.