Japanese rock band Sakanaction have announced they will be releasing a brand new single this March 16th titled “Rookie“. It has been almost seven months since their last single “Identity” which was released back in August 2010, the new single “Rookie” is said to be centered around club music, pop, and rock. The single will be available in two editions, Limited and Regular, and will include three tracks, “Rookie“, “Slow Motion“, and “Untitled“.

Sakanaction will also be holding a short summer tour called “SAKANAQUARIUM 2011 ZEPP ALIVE” which will kick off on June 19th at the Zepp Sapporo in Hokkaido. The band will then continue to perform at five other ZEPP venues in Japan.

Yamashita appeared on stage, receiving enthusiastic “Yamapi!” calls, and he performed “Daite Senorita“, “Fever to Future“, and “Seishun Amigo” as the opening songs, and grabbed the hearts of 4,000 fans.  When Yamashita performed “Seishun Amigo” on the stage, while being surrounded by the audience on all side, almost all of those in attendance were dancing to the song with Yamashita.

A total 25 songs were performed during the live concert, and Yamashita said to the fans, “I knew you guys (fans in Hong Kong) were very powerful, but it was just way beyond my expectations.  I will study the language more, and I want to sing Hong Kong songs next time!”

Although he has held a live concert with NEWS in Taiwan back in 2007, this was his first solo concert overseas.  During the concert, Yamashita gave handshakes on his own accord, and he even went down to the auditorium.

The live concerts in Hong Kong were held on January 29th and the 30th, so Yamashita said that he watched the Japan’s performance in the Asian Cup Final at the hotel room after the concert.  Since he is in good contact with one of the Japanese team’s player, Nagatomo Yuto, who had the game winning assist, Yamashita gave congratulations to his friend, saying, “Nagatomo was amazing.  He encouraged me.  Congratulations.”

It’s been a whole nine years since any Johnny’s Entertainment artist has held a live concert in Hong Kong, however, it seems like the popularity of JE boys, including Yamashita, is still quite high.  Since the tickets for the two live concerts in Hong Kong were sold out in an hour, there were two more additional stages.  Thus, Yamashita held four stages in total in two days.

With this Asia tour, Yamashita will also visit Taiwan, Korea, and Thailand, apart from the five locations in Japan.  He said, “I would like to dwindle the distances in this world.  I would hope I could make people in other countries think, ‘Idols in Japan are pretty fun.’”

On January 27, a multitude of commercials starring Arashi members were broadcast on TV, which have now been officially recognized by the Guinness World Records.

It was recently announced that idol group Teen Top will make their advancement into Japan after only six months into their debut.

“Teen Top have been receiving endless love calls from Japanese associates and have recently been active in promotions in both Korea and Japan. Teen Top will officially attend events and begin pre-promotions and broadcast appearances as of early February,” stated TOP Media.

They continued, “As we’ve been receiving an overflowing amount of love calls from Japan only six months into Teen Top’s debut, we have decided to promote in both countries simultaneously. We have begun counting down for the group’s official Japanese debut with major record labels and distributors.” here's a reminder post for the arama music awards! yay!

nominations will be announced tomorrow, so today is the day to put in your nominations.
you are allowed to vote three times.

1) There's been a total of 140 nominations! A lot of unique submissions and some that are really close to either making it or not making it. Some of the artists are Tokyo Jihen, Jero, and AAA. The top 5 nominated songs will be the ones that will go up for voting so please, if you haven't already, put in your nominations. If you guys don't want ARASHI all up in your koolaid, then nominate the artists you think deserve the recognition. The only categories that matter are Record, Song, and Album of the year.

2) People are getting stressed out over the genre specific awards. You do not have to nominate someone but if you do, just get their genre right. What I mean is that don't put KAT-TUN in the Visual Kei/Rock category just because they sang a few songs with a guitar in it and Kame wore eye shadow. They're not rock, they're pop. Use common sense if you want to nominate artists in the genre specific categories.

There have been some surprising nominations. Lets see where these last 24 hours will the nominations. If you want to flip the script on the polls, then nominate!

FIERCE, FLAWLESS, BETTER THAN YOUR FAVES IN ONLY 16 SECONDS. THE QUEEN IS BACK~

Tohoshinki's latest single "Why? (Keep Your Head Down)" got a weekly rank of #1 selling 231k. This is the second highest first-week sales by a foreign artist, the highest foreign first-week sales is also held by Tohoshinki with their single BREAK OUT! (sold 256k)

On the album charts the #1 went to Yamapi's solo album SUPERGOOD, SUPERBAD selling 102k. Including album releases with his group NEWS it gives him 5 consecutive number 1 albums. 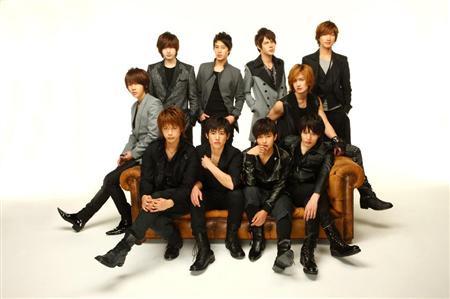 D☆DATE, a special unit of young actor group D-BOYS, and 6 member dance-vocal group Supernova will have a “Japan-Korea Good-Looking Guy Collaboration”. The other day, they hit it off at an interview in Tokyo. On March 21st they will have a live event at Osaka’s Universal Studios Japan. In addition to their music production, they will have a joint live and the dreams just keep getting bigger.

Actor Sato Takeru attended a meeting today on the 31st of January in the middle of Tokyo to announce his new CM for a brand new shoes brand called PF-FLYERS. In connection to the CM that will only air once per day on TV and on the website he was asked about what kind of luxury he awarded himself and answered; "I spend every day doing my best in relation to my work, so once in a while I can eat delicious sushi and drink Japanese rice wine".

The CM was shot by the creative director Yanai Michihiko and there will be 40 different versions of the CM that will air between the first of February until 12th of March with one version of the CM airing each day. The airing times of each CM are available att the official website. The director was present through a VTR and he was asked why he chose Takeru as the main character for the CM. His answer was "Even standing still, even while walking or hesitating, or really whatever he does he is still as pretty as a picture".

The CM will start airing on TV and on the official website as of tomorrow, January 1st.

So not actually simultaneously airing per say, but that's a lot of CMs in a very short time span.
(The other ones currently airing are JRA x2, LUMIX x2 and JP Bank). *why is this not a double-A side single???

Japanese band Orochi will have a tour in Europe.