WHY CAN'T I HOLD ALL THESE TEARS.

Tommy heavenly6 will be releasing a new single on October 26th called monochrome rainbow. It will come in two versions, limited and regular. This will be the first release by Tommy on Warner Music Japan.

The title track will be the ending theme for the anime Bakuman and the coupling track is temporarily named "I'M YOUR DEVIL Halloween ver."

SMTown Live in Tokyo Special Edition was held in Tokyo Dome on the 2nd, 3rd, and 4th of September 2011.

Although Kamenashi has been starring in this production since 2007, he took on a bold flight stunt for the first time this year. Regarding this, he admitted, “Honestly, this is the scariest thing that has happened to me until now. I’m going to try not to think about it.”

This year, fellow members Tanaka Koki (25) and Nakamaru Yuichi (28) participated in the production, and the three members demonstrated their perfect synchronization with their simultaneous flying. With the members backing him up, Kamenashi said, “I think this is the strongest ‘Dream Boys’ yet,” and gained courage from his fellow members.

The play started on the 3rd and will continue through the 25th.

Actress Nagasawa Masami and EXILE’s AKIRA have reportedly been in a relationship since April this year, but media outlet Sanspo is divulging that the couple may have broken up already.

The relationship between Nagasawa and AKIRA had never been officially confirmed in the first place, but a person close to the former couple broke the news to Sanspo on September 3rd, telling them that they ended the relationship sometime at the end of June. Reportedly, it was AKIRA who wanted to break it off.

They both have been good friends since their childhood, and eventually became lovers this year. Unfortunately, it seems that their busy schedules made it difficult to see each other, especially since AKIRA started to appear in NHK’s taiga drama “Gou“. After just half a year, he brought up the topic of ending the relationship, and they agreed to go back to a senior-junior bond. They haven’t seen each other since the breakup, but it’s said that they’re still keeping in contact via phone.

AKIRA just ended his stage play, “Red Cliff ~Ai~“, and will soon perform with EXILE at a Chinese music festival on the 25th.

Nagasawa also just finished her own stage play, “Crazy Honey“, for which she dyed her hair red for first time in her life. Her new movie “Moteki” will open in theatres on the 23rd. Hisashi Sasaki, deputy director of Shueisha's Shonen Manga group, posted four photographs from the set of the live-action Rurouni Kenshin film on Wednesday. He posted photographs of the Kamiya Dojo (outside and inside), Kenshin's Sakaba-sword and Sanosuke's Zanba-sword on the set, and Rurouni Kenshin manga creator Nobuhiro Watsuki himself watching the set.
The film will open in Japan next year. 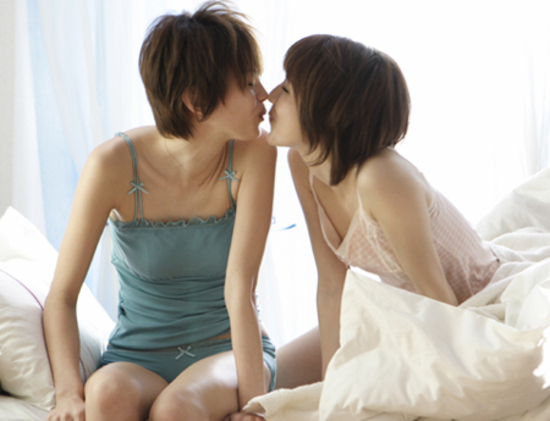 “These days it’s not rare at all to see two women going into a room together,” a maid at a Tokyo love hotel tells Shukan Jitsuwa (Aug. 18). “I’ve been at this job for 15 years. About five years ago, I noticed that more women started coming here together. The numbers picked up after our management instituted a ‘ladies’ day,’ offering a 30 percent discount, which we do twice a month. On those days, from noon onwards the place is filled to capacity with paired off housewives or university students.”

But, the reporter wonders, how can you know if the women are using the rooms for sex?

“These days, with men falling out of favor, I guess it’s expected that more women will want to pleasure one another. And unlike sex with men, which is over once they have ejaculated, women can keep going to enjoy themselves endlessly,” the maid says.

Article is written by men's magazine Shukan Jitsuwa. Posted it in previous response that women don't use sex services.

BREAKERZ's 5th album GO will not be released until 21st Sept but today , a special website for GO has been launched to concide with the anticipation of their upcoming new album .

The special GO website includes various niffy sections such as preview snippets for the whole entire album , full length PVs of the singles included in GO (with the exception for hEaVeN & REAL LOVE 2010 as both A-sides are excluded from the CD tracklist) & also a live schedule update of the trio's BREAKERZ LIVE TOUR 2011 “GO” which will start on 22nd Oct . A PV preview to Return to ZERO from their album can be seen here.
http://youtu.be/IRoNVS-gDF4 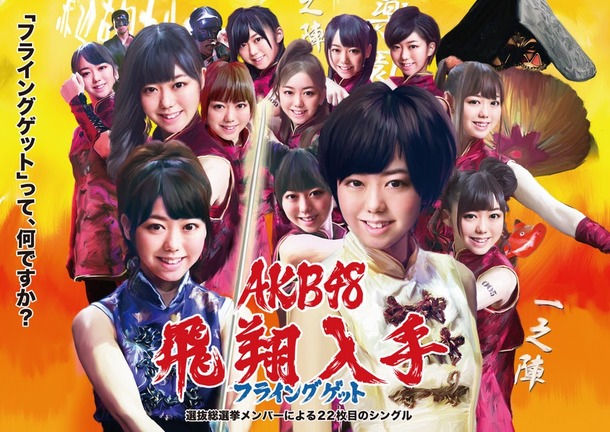 Some days ago, some photoshopped images of various akb releases with Minegishi Minami's face replacing every member's faces appeared on the net. This friday, AKB's tv show "Shukan AKB" ended its broadcast showing a sildeshow of various Minegishi pictures from older episodes of the show in the place where they usually show next week's episode preview. And today another of the regular AKB shows, "Nemousu TV" changed its opening to just show Minegishi's face all over it.

And now as the most impressive, a Flying Get PV CG'ed just using Minegishi's face was uploaded to the web.

Nikkan Sports interviewed someone from AKB's Management and this was their answer "There's a Minegishi-influenza deploying right now, that's all i'll say. Everything will be revealed the 6th."

KAT-TUN’s Kazuya Kamenashi had been getting special training from a Chinese stunt coach to pull off his biggest flying sequence yet, it was revealed at a press conference in Tokyo on September 4, reports Sankei Sports and Chunichi Sports.

The Johnny’s talent had just finished his performance of “DREAM BOYS”, which opened on September 3, when he appeared in front of the press.

Kamenashi’s highlight performance sees him standing on a triangular swing set up five metres in the air. From there, he bungy jumps down, then spins around to fly back up. The stunt requires the performer to grab the rubber rope as they are falling down, then use their abdominal and arm muscles to lift their entire body back up, do a full 360-degree spin, and end up back at their starting point. It has been reported Kamenashi repeated this 15 times at high-speed without any mistakes. Getting the stunt wrong would leave the performer dangling in mid-air.

A special performing coach had been called in from China to teach Kamenashi the stunt. Although it would usually take a performer four months to master the sequence, an already fit Kamenashi managed to master the stunt in just 20 days. Although the KAT-TUN star has been doing flying stunts for years, he said this one was his hardest yet.

Johnny’s & Associates president Johnny Kitagawa had said he has hopes of taking the show overseas to the US.

“There aren’t many talents who have been able to push themselves to that extent. I think it has potential to be recognized even in America. I hope we can sometime next year,” he said.

OMG, Akame in America. LOL.
Kame's work ethic is really one of a kind, but Johnny-san, if you're sending Dreamboys to America, please send KAT-TUN first to Hawaii. 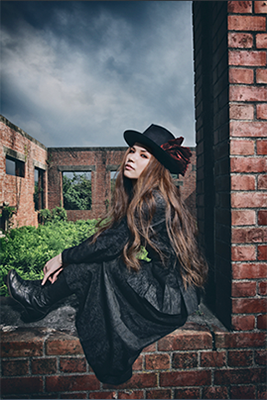 This will be Superfly's fourteenth single and is being used as the theme to the film "Smuggler Omae no Mirai wo Hakobe". It will be available in two editions, with the limited edition including a bonus DVD of the singer's free concert at at Yokohama Red Brick Warehouse. First press editions of the limited version are set to come in Digipak format, though this is subject to change. 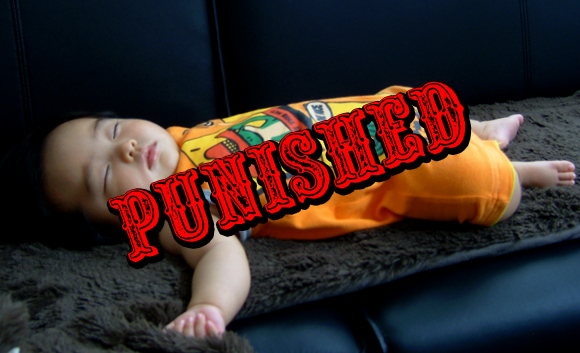 Depending on your point of view, the snooze button can be your best friend or your worst enemy. We’ve all struggled with waking up on time, and the snooze button can often lull us into a false sense of security, making it okay to jump back into your warm, comfy bed and ignore the outside world for another ten minutes or so. One Japanese iPhone app seems to have solved this conundrum with a time-tested method: public shaming.

Japanese iPhone app OKITE might not seem that unique. At first glance OKITE (“wake up!” in Japanese) looks like just another phone alarm clock. Even old flip phones (RAZR, anyone?) had alarm clocks built in. What makes OKITE different is that every time you hit the snooze button, the app sends out embarrassing tweets to all your followers on Twitter. 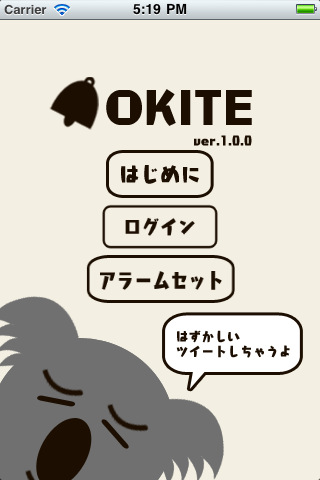 OKITE punishes you with some choice tweets for continuing to hit that snooze button. It covers everything from embarrassing fashion choices (“I’m wearing a sailor suit right now”) to the shamefully boastful (“The world needs more smart people like me”). But maybe the most condemning tweet of all from OKITE is “I can’t ride a bicycle.”

In this world, you can usually categorize people with the following: those easiest to approach and those who are difficult to approach. This applies to the entertainment industry as well.


goo Ranking was curious about this and asked its users, ‘Which of the young male celebrities are easiest to approach?‘


Check out who came out on top below!

Mr. Other sure is popular now-a-days. :3