Check out his performance below, starts at 1:40


Source
The abuse of AnAn Shooting pictures is totally intentional.

Singer-songwriter Kato Miliyah's upcoming first novel, "Umareta mama no Watashi wo" (9/22) will feature a cover hand-drawn by the artist herself. The book, which Kato worked on for a year, will be the story of a 22 year old nude painter who cannot find love, and the cover represents that by featuring the sketch of a naked woman.

( Collapse )
On the seventh year of her career, Kato released "M BEST" which hit #1 on the Oricon weekly charts. This has been her third consecutive chart-topping album and has passed the 270,000 mark as of this week.

Wasn't sure if this was NSFW but I put it under a cut to be safe. Anyway, she's so talented. Singing, dancing, song-writing, drawing, and novel writing... is there anything she can't do?

( Collapse )
“8EIGHT8″ is scheduled to be released on October 12th.

everything about this is amazing safe no new pvs, oh well T_T,hope it gets first though

also preorders are available on all the major sites!!^^

NEWS: haven’t released a single since November of last year

Not putting out a single in over 10 months in Jpopland is basically like disappearing off the face of the planet. Idol groups especially are like sharks, you need to keep on swimming (constantly putting out singles) otherwise you die and everyone moves on to the next. Industry insiders and fans alike are confused as to why NEWS as a group haven’t been doing anything. Fuggers McGee (Koyama) and Tegoshi have been spotted on J-web and Twitter respectively talking about how they want to hang out with everyone/go tour.

Rumor has it that the reason why they haven’t been doing anything as a group is because if Yamapi doesn’t feel like doing anything, then the group doesn’t do anything. Damn, Yamapi, I know you probably were getting happy ending massages every day when you were doing your asia tour earlier this year but get yr ass back2work. In front to 2,700 fans, leader Urata Naoya (28) stated to the fans, “This is a celebration for AAA’s sixth year! Everyone, let’s have fun.” Then fellow member Mitsuhiro Hidaka (24) revealed, “In

our early days of our debut, the seats in the back were empty. As time
passed, more and more people gathered here for our live. Thank you very
much,” and spoke earnestly to his fans.

At this event, they performed 26 songs including the track list from their best album, “#AAABEST”.
The tour will hold 11 performances at Zepp venues in Tokyo, Sendai,
Nagoya, Fukuoka, Sapporo, and Osaka and approximately 24,000 people are
expected to attend.

CALL has been my latest jam ^^
and mods, sorry. LJ-cut will literally cut the articles. I have that problems lately.  Anyone know how to fix it?

Maria Kamiyama has been a busy woman since being named Miss Universe Japan in June. She has been learning how to present herself and walk like a beauty contestant, as well as getting beauty and nutritional tips, in preparation for the finals in Sao Paulo, Brazil, on Sept 12.

“I have to do a lot of body training and pay attention to what I eat,” said the 23-year-old in excellent English. “We have to eat 80% healthy and for the rest, whatever we want. I love sweets and a life without sweets would be really stressful.”

Born in Tokyo, Kamiyama graduated in English literature at Seikei University before heading off to Hawaii where she spent a couple of years. While there, she worked at American Eagle Outfitters. “It was a great time,” she recalls. “I remember going shopping at Wal-Mart just in a bikini and flip flops. It felt natural, but when I came back to Tokyo, I thought I can’t do that anymore.”

Until recently, Kamiyama had been working as a salesperson in a clothing store in Ginza. The idea to enter the Miss Universe Japan contest came about a year ago. “I always thought that beauty contestants lived in another world,” she said, “but I also thought that being in one would give me the chance to make a difference in my life and help others. I didn’t tell anyone, not even my family, when I applied because I was a bit embarrassed. I was still in Hawaii when the Tokyo audition was held, so I had to go to the Osaka one when I returned to Japan. I asked my sister to come with me and then I told her. After a second audition, my parents found out and said, ‘No, that is not you.’” 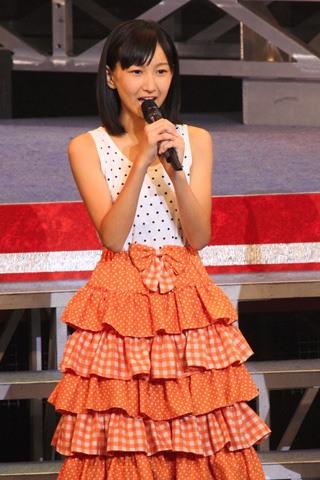 Less than a month after the Hello! Project idol group S/mileage added 5 new “sub-members” to its lineup, one of them is dropping out of the group.

13-year-old Kosuga Fuyuka was suffering from poor health during rehearsals for the group’s tour, and a medical examination revealed that she has severe anemia. She will need several months of treatment to recover, after which she is expected to resume her entertainment career as a Hello! Pro Egg.

S/mileage is now down to 7 girls (3 members and 4 sub-members), since former member Ogawa Saki (14) also left the group around the end of last month. The group is already set to release their next single “Tachiagaaru” on September 28.

Here's the Source and here the translation

Why Lucifer? I want RDD.

Go for it EXILE! Also hoping for ClariS, Mika, The Cro-magnons and Sukima Switch to do well. But ouch at albums chart next week! Besides AAA who should do decently, everybody else is just...:(

This is his first play in five years and he will once again be starring in Ninagawa Yukio’s play. Speaking of this fact, Matsumoto commented, “After the completion of our previous play, Ninagawa told me, ‘If we don’t collaborate anytime soon, I’m going to die’. I am looking forward to it,” speaking of his anticipation with collaborating with Ninagawa once again.

Matsumoto will play a young boxer for this play and revealed that he has been readily hitting the gym since March. He revealed, “It’s a fresh experience. I want to keep going until the opening day,” and showed his ambition to work out his body. Koide Keisuke (27) will play the role of the rival and he stated, “I’m excited to exchange some blows,” and displayed his competitive nature to the audience.

This play will begin on October 29th at the Saitama Art Theater.

Watch the video below!

7!!(pronounced seven-oops) has announced news of their third single. Titled “Bye-Bye“, it will be the opening theme song to anime “Kimi to Boku” and is scheduled for release on November 2nd.

The single comes in two editions: a normal edition and a “7!! Anime Edition”. The normal edition first press will come with a anime illustration wide cap sticker and only 3 tracks, while the “7!! Anime version” will be a special digital pack featuring the TV version of “Bye Bye” and a anime cast radio drama.

According to some young female Twitter users, Peach John shops are becoming quite the hot spot for male AKB48 fans, reports J-CAST News.

The lingerie retailer appointed AKB48 girls Oshima Yuko, Kojima Haruna and Kasai Tomomi as its latest advertisement models back in August, and beginning on September 7th, customers who purchased more than 3000 yen's worth in products from the store would receive a poster of the three members on a first-come, first-served basis. On the 8th, a female college student noted a peculiar development in this series of tweets:

At the grand reopening of Peach John's Shinjuku shop, they were giving away posters of AKB48 girls in lingerie as a novelty if you spent over 3000 yen, so a bunch of old men showed up in the store... So many old men in an underwear shop, it was at the level that I'd have liked for them to be reported as suspicious persons... And to buy a heart bra or something like it's no big deal just because Kojiharu is wearing it? How horrifying.

When asked by a clerk if his purchases were a present for someone, one man was said to have answered, "No, they're not."

The Peach John posters can currently be found on Yahoo! Japan Auctions for up to 5000 yen; however, many are being sold by users with a history of offering AKB48 goods, revealing that at least some people have obtained these posters for the purpose of making a profit.

A representative for Peach John refuted claims that men were flooding the stores, stating that men typically come to buy gifts for their girlfriends and that with the increase in customers since the Shinjuku location's reopening, Twitter users had most likely seen one or two men at best.

While netizens have complained there's no point in marketing AKB48 towards women when most of the group's fans are men, the company official went on to give this statement:

We ourselves thought our male customers would increase at first, but our female customers are increasing by leaps and bounds, and they all come to buy exactly what the AKB48 girls are wearing. The advertisement itself depicts the members differently than usual and it has the tone of fashion photography, so it's not because it's AKB48 that these women are interested, but because they simply find the visuals cute.

The popular novel 'Nazodoki Dinner no Ato De' has been made into a drama, starring Sakurai Sho as a sharped tounge butler. Which male actor do you want to become a butler?
20. Other
19. Eita
18. Koike Teppei
17. Matsuyama Kenichi
16. Fujiwara Tatsuya
15. Koide Keisuke
14. Keritani Kenta
13. Miura Haruma
12. Aiba Masaki
11. Oguri Shun

apparently, that's the name of the new show
and from other sources, first episode will be titled: Zettai ni Maneshi takunaru Okite SP

KAT-TUN will host a new variety show on NTV, their first since “Cartoon KAT-TUN” ended in March 2010. The new show is tentatively titled “KAT-TUN no Zettai Manetaku Naru TV” and will have the members of KAT-TUN presenting people “you will want to imitate” and various goods, aiming to create new trends.

It seems that the members will be in charge of different areas based on their interests. For example, Kamenashi Kazuya will cover food and sports-related topics, Tanaka Koki will deal with music and recent hot spots, and Nakamaru Yuichi will handle new products and daily living.

Three guests on the show will determine which members presented something that “you would not want to imitate,” and those members will have to participate in a penalty game, possibly drawing on other recent trends.

Taguchi Junnosuke commented, “Our concerts got postponed this year, and the five of us weren’t able to release an album, so I’m very happy that we are able to work together on something.” KAT-TUN has been a five-member group since last July, when Akanishi Jin officially left to pursue a solo career.

i miss CTKT!! so very happy!
for Maru's belated bday, & KAT-TUN as well: