MBLAQ will be releasing their second Japanese single, “Baby U“, on October 26th.

In addition to being their second single, “Baby U” will become the opening theme song to Nippon TV’s anime ‘Beelzebub‘. Fans have been eagerly anticipating the release of the single.  Fortunately, they won’t have to wait until the 26th to hear “Baby U”.

Earlier today, a 1 minute and 30 second clip of “Baby U” was broadcast during the opening segment to ‘Beelzebub’, along with a promotional clip of the song.

The Japan Tourism Agency this week announced the winners of its annual awards for the best tourist draws in Japan. Prizes went to American singer Lady Gaga and the Hula Girls, a group of Hawaiian-style dancers from the Fukushima onsen resort of Iwaki.

The agency said that Lady Gaga was honored for performing a live show in Japan in July to raise money for tsunami survivors and for helping to drum up interest in Japanese culture. The Hula Girl team was praised for helping tourism by continuing to perform in Fukushima despite the risk of radiation.

Other recipients included Hidetoshi Sakamoto, the director of the Aso Design Center, a think tank working to strengthen ties within the Aso area in Kumamoto Prefecture, to promote regional development and tourism, to protect the environment and scenery, and to disseminate information. Tomomi Masuda was also selected for his work as the president of the Tottori Tourist Board and the progress he has made in town revitalization projects in Tottori. The traditional ghosts and goblins that appear in the famous manga “GeGeGe no Kitaro” were also recognized for popularizing Japanese culture overseas.

The awards will be presented at a ceremony on Oct 3 in Tokyo.

You should always pucker your lips like you are getting ready for a kiss, close your eyes, then slowly bring your canned coffee to your mouth and savour the wonderful sweet bitter taste just like you are falling in love ^^ 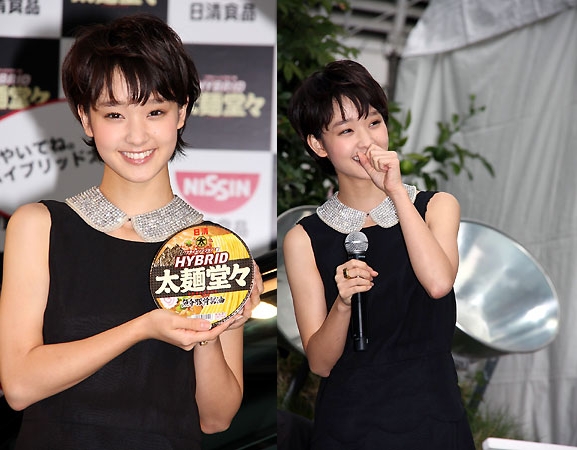 At the event attendees played around with the term ‘futomen’, which usually translates to ‘fat noodles’. However, Gouriki was asked, when having a meal with a man, whether she would prefer a ‘futo man’ (plump man) that can eat a lot or a reserved ‘hoso man’ (thin man).

She smiled and replied, “It would be better if he was a futo man and ate a lot.”

Toyota representatives were also present at the event with their ’Prius‘ hybrid car. They called it the ‘Hybrid Futomen Dodo Car’ and attached a giant cup of the said noodles onto its roof.

Gouriki has yet to get her driver’s license, therefore reporters were more interested in her passenger seat stories. She said, “Usually my mother is driving and I’m sitting in the passenger seat.” Further, she added bashfully, “I’d love to have a ‘drive date’ someday, but I have to find the right man to drive. I hope I will find one.”

The actress also discussed her ambitions and explained, “From now on I’d like to become more beautiful, appearance-wise and character-wise, just like a ‘hybrid’ actress. That’s my goal and I will try my best to achieve it.”

The ‘Nissin Hybrid Futomen Dodo’ cup noodles, that actually are a ‘hybrid’ of fried and non-fried noodles, will go on-sale on Monday, October 3rd.

Shiritsu Ebisu Chuugaku, or EbiChu for short have released a pv for their new single Motto Hashire! which will be released in 2011/10/05, the pv has a school festival theme with the ten members divided in two groups.
( Collapse )
source

Fourteen year old Usagi Tsukino is a self-confessed crybaby. An avid fan of superheroine Sailor V, she enjoys her day-to-day life with her best friend Naru and her family, being perpetually late and a little bit clumsy. Then one day she trips over Luna, a talking black cat with a crescent moon on her forehead. Luna tells Usagi that it is her destiny to fight evil as the pretty guardian Sailor Moon, with the ultimate goal of finding her companions and the lost Moon Princess. Is Usagi up to the job?

+ Heroine worth rooting for who also sets a much better example than many contemporary protagonists in shoujo, interesting use of mixed mythologies, nice foreshadowing of what's to come. Attractive art.
− Translation doesn't always sound natural, some homonym issues. Inconsistencies with costumes and anatomy.

The word “classic” can be subjective. Some books are classics by a fluke of the literary establishment, while others are considered as such because they are genuinely good and either mark a turning point in a specific genre or have a reach far beyond their publication dates. Naoko Takeuchi's Pretty Guardian Sailor Moon fits in the latter category. While Usagi isn't the first magical girl, she is one of the best, and Kodansha USA's reissue of the series – complete with new translation – shows that her story stands the test of time.

In Dreamboys MC, Maru tries to explain the show:

Maru: It is some sort of drama, that wasn't like a normal drama but not variety and not news but something else that apparently starts the first of October. You should all should watch it.
Kame: We can make absoutely nothing out of your explanation though.

According to Massu the concept of this drama is to use currently on-sale goods, and filming in actual attraction spots in Japan to provide info about recent activity in Japan. The setting of this drama is that they are going camping!

Dachitabi is a tv show where you learn information (re. the popular goods/food etc) while being a drama too (A/N: 'infotainment').
The diverse information/reference materials that appear can be checked too (by pressing the d button on the remote control).

The goods that appear in the show all exist! If you wish to obtain them, there will be information on how you can get them!

ohhhh BFFs got together. and loling at Maru's character in the 1st episode

On July 30, NICO Touches the Walls announced a new song titled "Endless Roll."  The song was written for the movie "Switch wo Osu Toki" (movie details at Tokyograph), released on September 17. The movie is based on a novel by Yamada Yusuke and stars AMUSE talents Koide Keisuke and Mizusawa Erena.   "Endless Roll," lyrics and composition by Sakakura Shingo (bass), is  only available through digital download.


Old... but might as well post the PV before it disappears, like most NICO pvs. Thanks SME and Ki/oon, for still not opening up your own YT channel.

“Asian Ace” is a program that selects experts in dance, music, film, food, and fashion from various Asian countries to battle against a
Japanese representative team. WEAVER, who’ve been singing about dreams and hope since their debut, will support the entertainers through this song.

In related news, WEAVER’s nationwide tour, “WEAVER 3rd TOUR 2011 ‘Jubilation ~Taiyou to Tsuki no Parade~’“, will kick off on November 11th at CLUB DIAMOND HALL in Aichi. It’s scheduled to wrap up on December 21st at Shibuya Koukaidou, with a total of nine performances in eight locations. Vocalist Sugimoto Yuji’s solo mini-album will be on sale at the tour venues.

Recochoku has just released the monthly charts for the month of September.

Check out the top ranking for digital singles, chaku-uta, and music videos over the past month below!

The complete top 100 of the monthly rankings; daily and other rankings can be found here: Recochoku

Rookie singer Ito Shohei’s debut song, “Dream of Life“, has been chosen as the opening theme song for the popular anime, “Bakuman“.

Ito is a 22 year old singer-songwriter from Fukuoka who started songwriting when he was 14 years old. Inspired by the blues, soul, jazz, and R&B music, Ito began playing the guitar at the age of 10. He uses self-taught techniques to express the themes of the importance of having dreams, irreplaceable friends, and his unforgettable hometown.

His debut single, “Dream of Life”, will be released on December 7th by Warner Music Japan. It will include two other songs, “My Friend” and “Music on my mind“.

Additionally, Ito is scheduled to hold a live concert on October 20th at shibuya 7th floor.

A-sketch is the  label and/or management of ONE OK ROCK, flumpool, WEAVER and NICO Touches the Walls.
Collapse