HEY! HEY! HEY! Music Champ announced that they are going to air a two-hour-long special on October 10th in order to celebrate the 18th year anniversary of the show.

They also revealed the line-up for the special on their blog and made it clear that it’s going to be full-fledged K-Pop special, but the biggest highlight is going to be the appearance of Tohoshinki, who haven’t been on the show for two years.

The rest of the line-up includes T-ARA, RAINBOW, and AFTERSCHOOL, who are each going to perform medleys of their most popular songs, as well as performances from 2NE1 and FTISLAND.

Child actor Suzuki Fuku is going to be one of the panelists again and he already announced that he is going to dance to “Maru-Maru-Mori-Mori!” together with the girls from AFTERSCHOOL.

However, the show won’t be limited to just K-POP. The long-standing pop & dance group TRF, who have frequently been in the TOP 20 when HEY! HEY! HEY! Music Champ started 18 years ago, are going to perform a special medley that shouldn’t be missed.

Furthermore, it was announced that there is going to be a special collaboration by ‘ONE PIECE‘ and AMEMIYA dedicated to Tohoshinki. For single and album's article, here.

So happy to see Sakanaction doing well and surpassing their previous album's first week! Yeah for SID, EXILE and RIP SLYME too! :) The 28th Best Jeanist Award 2011 (sponsored by Japan Jeans Association) was announced in Tokyo on October 5th. It is chosen from a nationwide popular vote. Aiba Masaki (28) of Arashi and actress Meisa Kuroki (23) won for the first time. Last year, winners for the past 5 years, Kamenashi Kazuya (KAT-TUN) and Koda Kumi had entered the "Hall of Fame". The committee also has chosen Nagamoto (25) of the Japan National football team as well as the an Inter Milan player as the winner for the new establish award last year, the "Special global bravery prize". Actress Maya Miki (47), Wakatsuki Chinatsu (27), and former WBA Super Flyweight champion Katsuya Onizuka (41) awarded with the "Special Prize" by the Council. Chansung (21), a member of the Korean group 2PM, has been given his first regular role in a Japanese television drama series. He will appear in the TBS series “Kaito Royale,” which was announced last month with a main cast of Matsuzaka Tori, Fukushi Seiji, and Omasa Aya.

“Kaito Royale” is based on a popular mobile social game in which players control a team of thieves to carry out various missions. Each thief is categorized as a specific type, and it was previously revealed that Matsuzaka, Fukushi, and Omasa will be playing the Intelligent, Skill, and Sexy types, respectively. Chansung has been cast as the Macho type. SINGAPORE — The first overseas AKB48 Official Cafe, where fans of the huge Japanese all-girl pop group can meet its members while having a meal or tea, opened in Singapore in July and has since gathered enthusiasts from across Asia.

The growing international popularity of the group, created in 2005 with the concept "Idols you can meet every day,"
has also caught the eye of the Japanese government and corporate officials trying to boost the country's content business and exports on
the strength of Japanese pop culture.

For those who wants to see the pics of JKT48 in training, I posted them here They were members of the voluntary Diving Search & Rescue Association, and had just finished their search activities for the day.

A woman waiting on the pier asked Mikio Ota, the team leader, "How did it go today."

hope I tag this right :P or if not, please enlighten me Cambridge Massachusetts — A group of Japanese researchers won the spoof Ig Nobel chemistry prize Thursday for
developing a smoke detector that sprays a wasabi scent to warn of possible fires.

"We invented the wasabi fire alarm to wake up people with hearing disabilities in case of emergency," Makoto Imai, assistant professor at Shiga University of Medical Science, said before the ceremony at Harvard University, adding that the device is a "life-saver."
( Collapse )

Brilliant! One more advantage, they have healthy sinuses for sure :)

It's nice to see fans are sharing their enthusiasm on the net. Now, I present you fancams on the meet and greet plus handshake events at the Plaza Senayan Atrium yesterday. And yes, camera/taking pics/fancams are allowed. Even the official JKT48 asked fans to share them via FB.
And please show some respect to this fans who have share it with others, who couldn't attend the event.

This MC is nicer :P sadly, I don't have time to translate  the 1rst video

AKB48 member Kasai Tomomi revealed on her official blog that she has been diagnosed with peritonitis, an inflammation of the pelvic region.

According to her agency, this is not a serious matter, and Kasai also explained, “Right now, I’ve gotten a lot better after receiving medical treatment. I want to work within my limits, and recover completely as soon as possible.”

Last month, Kasai had to leave a handshake event prematurely due to poor health conditions.

A representative for a television station believes that anti-gang legislation that started on October 1 and prohibits ordinary citizens from doing business transactions with gangsters will result in careful monitoring of the activities of celebrities to ensure compliance.

“A thorough examination of all potential entertainers will be required prior to employment,” the executive says, “and statements defending yakuza will not be permitted.”

In August, television personality Shinsuke Shimada resigned from show business after it was revealed that he had a relationship with an upper member of the Yamaguchi-gumi, Japan’s largest criminal organization.

Since Shimada’s resignation, Japan Racing Association revoked the license of horse trainer Michifumi Kono for alleged ties to the Yamaguchi-gumi and the Kameda Gym received a warning regarding gangsters attending boxing matches.

“Any support displayed for Shimada will not be allowed either,” the insider says. “The checking of blogs and Twitter feeds will not be excluded.” 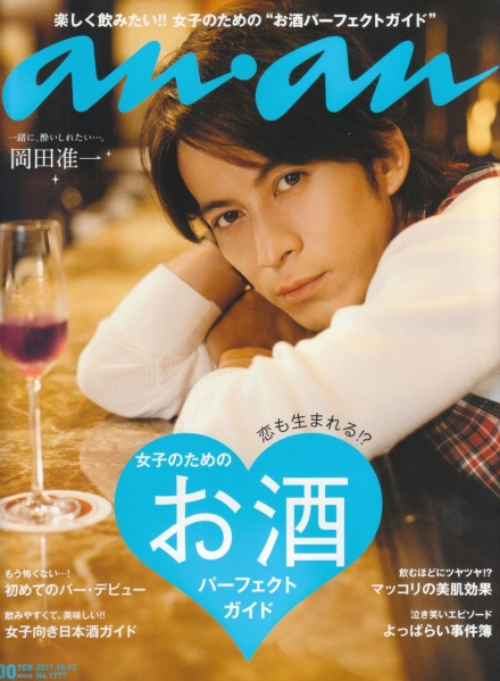 The main segment of this week's anan was a drinking guide tailored specifically for the magazine's female demographic. Actor and V6 member Okada Junichi was chosen for the cover and photoshoot for his "sexy charm", with the theme being an adult date at a bar.

he can take me out any time

The nominees for ‘The 39th International Emmy Awards‘ have been released today, with NHK’s epic special drama “Saka no Ue no Kumo” (“Cloud Above the Slope”) being in the run for ‘Best Drama‘ for the second consecutive year.Three more Japanese can be spotted among the nominees, including…

An all star Christmas live event called “LAWSON present MUSIC FOR ALL, ALL FOR ONE supported by Sukapaa” will be held during a three day span between December 23rd and 25th at the Yoyogi National Gymnasium. Some top names such as flumpool, Hilcrhyme, and Kimaguren have already been chosen to perform at this live event. During the three day event, 15 groups will participate in making it a memorable Christmas for everyone. Now, it has been revealed that JUJU, KARA and Koda Kumi have been added to the line up.