Ripped from ustream so it's not super great quality but no matter. Keiyuu looks really cute in his Halloween themed outfit. ^^

Recently, the PV Previews for NMB48's Shirogumi and Akagumi songs were released.
The full audio clips for the other B-sides, Boku wa Matteru, Uso no Tenbin and Nande Yanen Idol were also released.
Enjoy these video and audio clips below!


4th single of this year,get that money Kuu

my favourite version is the mumo edition ;_;

It was announced that flumpool is releasing new single called "Present" on December 7th.

The single, which is going on sale just before band's two days at Saitama Super Arena is, as title says, a present for their fans for the ending of the year. "Gathering all happy and sad things, we want to sum up the ending [of this year] with a smile. Connected with feeling of gratitude towards precious people in our life, like family or friends we want to do our best next year as well!" comments flumpool. It’s been reported that Backstreet Boys member Howie D will collaborate with singer/actor Shirota Yu (aka ‘U‘) for a song called, “If I Say feat. U“.

The song will be included as a bonus track in the Japanese edition of Howie’s solo debut album, “BACK TO ME“, which will be released on November 9th. It will also be released as a digital single on October 12th prior to the album’s release. Moreover, “If I Say feat. U” will be the end credit song for the Japanese dubbed version of “1911“, which is Jackie Chan’s 100th movie in his career. The movie was selected to open the ‘24th Tokyo International Film Festival‘.

Reportedly, Howie was looking for a Japanese artist who has an international identity. Shirota was proposed as a candidate, and Howie agreed that he had a charm the world would accept.

Shirota commented, “‘If I Say feat. U’ is a pure love song, and it is a warm song. We will have to let you judge the finished work, but we are both coming to feel that it’s been wonderfully done.”

Howie D will be holding an event at Odaiba Venus Fort in Tokyo on November 12th.

This song will be featured on Dohzi-T's upcoming album "12 Love Stories 2", scheduled to be released this winter.

NEW YORK — South Korea on Tuesday mentioned the issue of "comfort women," a euphemism referring to Korean women who were forced to provide sexual services for Japanese soldiers during the war, at a human rights panel session of the U.N. General Assembly, calling on the United Nations and all of its members to provide remedies and reparations for victims of sexual violence during armed conflicts.

South Korea "is deeply concerned with increasing sexual violence against women in armed conflicts, with particular reference to systematic rape and sexual slavery, including the so-called comfort women," Ambassador Shin Dong Ik said in the assembly's third committee at the U.N.

While the ambassador cited "comfort women" as those who were forced into sexual slavery for the military during the war, he did so without mentioning Japan. South Korea also called for "bringing the offender to justice."

Japan, for its part, reiterated its position that the compensation issue was settled by a bilateral treaty in 1965 that normalized diplomatic relations between the two countries.

The issue of reparations, property and claims concerning the war "has been legally settled," said Kazuo Kodama, Japan's deputy ambassador to the U.N., in his speech at the committee.

Japan "recognizes that this issue was a grave affront to the honor and dignity of a large number of women, and has extended its sincere apologies and remorse to all those known as wartime comfort women who suffered immeasurable pain and incurable physical and psychological wounds," Kodama said.

He also said, "Japan has been facing up to its past with sincerity and consistency since the end of World War II."

Shin rebuffed Japan's claim and said, "My government would like to make clear its position that the issue of comfort women, which may constitute war crimes and crimes against humanity, has not been settled by bilateral treaties.

The South Korean Constitutional Court ruled in August that it is unconstitutional for the South Korean government to make no specific effort to resolve the dispute with Japan over its refusal to directly compensate the women for their sexual enslavement during Japan's colonial rule of the Korean Peninsula from 1910 to 1945.

Following the ruling, South Korea has stepped up activities on the issue.

Source
Hope UN-South Korea-Japan can resolve this issue. Especially between the two governments. And if SK gov, if you really mean justice to all victims, I suggest you ask other countries which had been occupied by Japan in WW II to join the movement.
But whatever happen, I hope the women gets the peace and justice they deserve. ISHINOMAKI, Miyagi Pref. — At the end of the month, the doors of the old gym will be locked and the 50,000 items stored there, including wedding and graduation photos, trophies, satchels, gym vests and other school clothing, taken to a nearby incinerator.

For now, however, the belongings remain neatly arranged on tables to allow the handful of visitors who drop by each day to sift through them. It's like a rummage sale, only with tags that indicate the item's owner — some of them pupils from the nearby Okawa Elementary School — instead of a price.

The Japan Tourism Agency said Tuesday that 10,000 foreigners will be given free round-trip tickets to the country in the next fiscal year as part of a campaign to reverse the plunge in tourists since the March 11 disasters and amid a prohibitively high yen.

The agency said it will open a website to solicit applicants. They will be required to answer questions on postquake tourism in Japan and what their travel goals are in the country.

The successful applicants will receive return air tickets but will have to pay for their accommodations and other expenses, said Shuichi Kameyama, head of the agency's international tourism promotion division.

The agency has requested ¥1.1 billion in the fiscal 2012 budget to cover the campaign, he said.
During or after their visits, the agency will ask the recipients to post on blogs or other online social media about their stay in Japan, hoping positive feedback will lure more visitors.

Officials said fear of radioactive fallout from the Fukushima No. 1 nuclear plant and the soaring yen are discouraging foreigners from visiting and it may take years before international tourism rebounds to the prequake level, let alone achieves the agency's goal of drawing 30 million foreign travelers a year. Officials agree that promoting tourism is vital for Japan to help offset domestic demand and to revitalize regional economies.

"First and foremost, we will need to show (the world) that Japan is a good place to visit," Kameyama said.

The agency said it came up with the idea after an online survey of 2,000 people around the world in August indicated many would trust what their fellow countrymen say about traveling in Japan.

....I shall kick myself on the butt for not sending that scholarship application to Japan. My own fault :3 Well, hope the program succeeded *cross fingers*
the other version of this news, that I posted before, is here

A burst of vibrant colors for the weekend, courtesy of lovely furisode kimono designs from OshimaUco, produced by Oshima Yuko (大島優子), a member of the Japanese pop idol group AKB48. Love the sky blue color below, paired with peaches, pale pinks, yellows with a punch of orange.

Earlier, we reported that Hello! Project would be releasing a new collaborative in-house single called “Busu ni Naranai Tetsugaku” under the name, ‘Mobekimasu‘. The full PV for that single has just been revealed, and it’s drawn considerable praise for its polished cinematography!

In this new PV, the girls are seen dancing fluidly en masse in fun Lolita-esque costumes on a sophisticated stage. There’s something for everyone in this PV, thanks to its abundance of solo shots as well as interesting ‘pairings’. Check out the PV below! 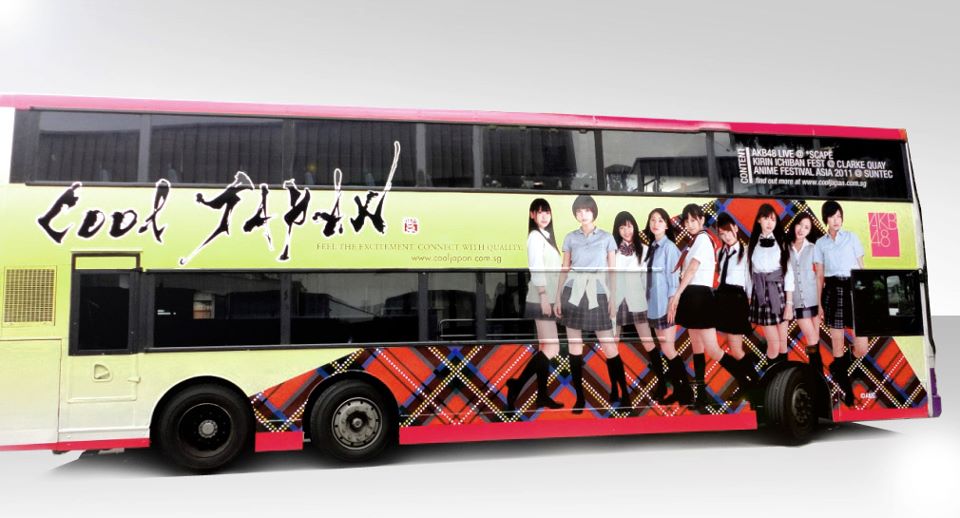 ( Collapse )
Advertisements of Cool Japan project featuring AKB48 is already plastered all over Singapore SBS Public Buses which are traveling around Singapore.
For Singaporeans who want to check out the bus, the bus service is "111"

Two groups from Hello! Project, Berryz Koubou and ℃-ute will be releasing their special collaboration single “Amazuppai Haru ni Sakurasaku” on November 9th under the name “Berryz Koubou×℃-ute (pronounced as ‘Berikyuu’).” Recently, the PV for their upcoming single was revealed on Mobekimasu official YouTube channel.

The song has been chosen as the theme song for a horror movie “Ousama Game” which all members of Berryz Koubou and ℃-ute appear in.  ”Ousama Game” is scheduled to be released on December 17th.