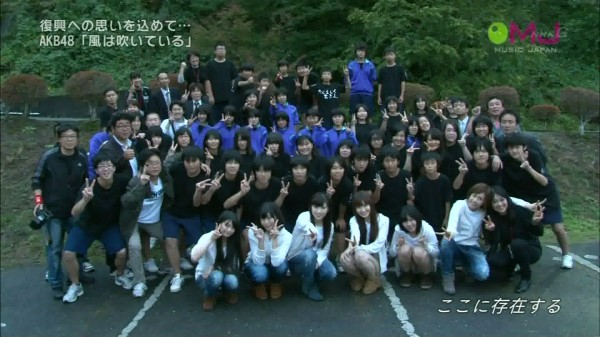 The short segment showed the girls visiting disaster-stricken areas that were affected by the Tohoku Earthquake earlier this year. The members performed a mini-live, and took part in a handshake event that drew people of all ages. The girls were seen giving much support to the locals, who in turn shared their blessings and love for the group.

aka all of Ayu's pvs

though favourite pv from the bunch arama?

for me Because of You!She has some the best pvs I have ever seen,pv queen!!! 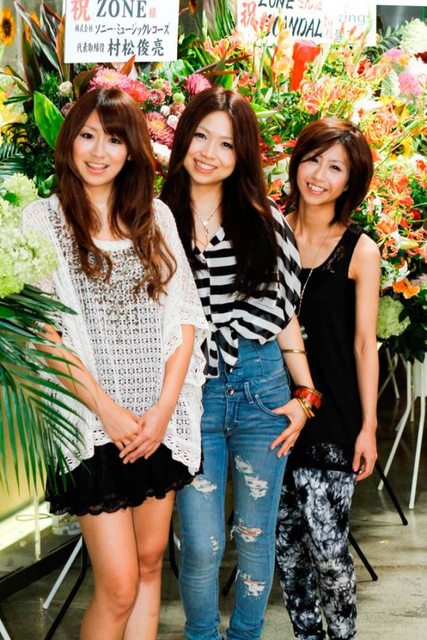 TOMOKA, a member of the girl group ZONE, is retiring from show business. Since September, she has been suffering from poor health, so she has decided to withdraw completely from the group and from the entertainment industry.

ZONE just reunited in August for the 10th anniversary of their song "secret base ~Kimi ga Kureta Mono~," and they later announced that they would extend their activities at least until the end of the year. However, with TOMOKA’s departure, the group will have to continue on with only two members, MIYU and MAIKO.

According to the announcement, TOMOKA said that pushing herself despite her health was causing concern and problems for the people around her, so she chose to retire. "I feel really glad that I was able to choose the path of music and continue with it until now," she said in her comment to her fans. "Although the way to my dreams has changed, even now I want to walk forward while holding onto my dreams."

Originally a four-member group, ZONE debuted in 2001 but disbanded in 2005. Former member MIZUHO was already retired from show business, so they reunited as a three-member group in August.

It's already released though it's not physical it's Digital!

the song is cute^^
becky♪♯
Source

following their 2 previous singles "Flying Get" (First week sales: 1.35 million) and "Everyday, Kachuusha" (First week sales: 1.33 million), this gives AKB a new record as the first artist ever to have 3 consecutive singles as million sellers on their first week in japan, as well as gives AKB the monopoly in the top 3 of the "Highest First Week sales" in Oricon's Singles category.

Counting this single's sales, AKB has reached a total of 10.034.000 CD single sales. being the forth female group in japan holding this record after Pink Lady, SPEED and Morning Musume.

Busu ni Naranai Tesugaku is out on the 16th of November!
( Collapse )
---------------
Quick before the vid get taken down! Looks like they are gone, I said to be quick! Hey are some Dailymotion ones instead :) Until they are ready click the source button to go stright to the source!

Today it was revealed that AKB48 member, Itano Tomomi, has been diagnosed with a gastroenteritis.

According to her agency, Itano complained about fever and stomach ache on Sunday morning. Upon getting examined at a hospital on Tokyo, the idol was diagnosed with the stomach flu. Her condition isn’t serious, but she will have to stay home until she gets better.

On Saturday, Itano still participated in a big handshake event with AKB48 at the Ajinomoto Stadium in Tokyo. Officials guess that the long and exhausting event, mixed with the cold weather, must have strained her body too much. 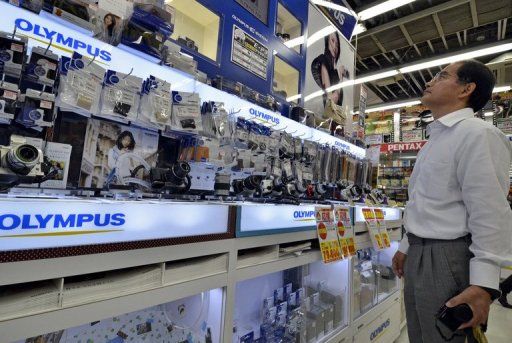 In an interview with the Financial Times, Prime Minister Yoshihiko Noda called for clarification on the issue and said he was concerned it would be seen as part of a wider problem in the country’s business culture.

“What worries me is that it will be a problem if people take the events at this one Japanese company and generalize from that to say Japan is a country that (does not follow) the rules of capitalism,” he told the paper, adding: “Japanese society is not that kind of society.”

Noda’s comments come as concern grows among policymakers over the impact of the scandal, which has shone a light on the sometimes murky world of deal-making in the Japanese boardroom.

Olympus has been mired in crisis since ousting its British chief executive and president Michael Woodford on Oct 14, who contends he was fired because he raised questions about payments made in a series of deals between 2006 and 2008. 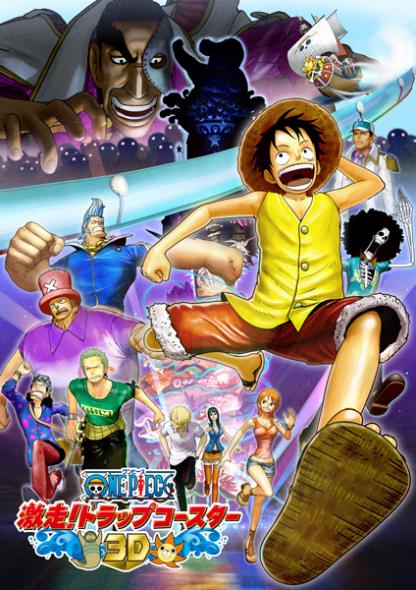 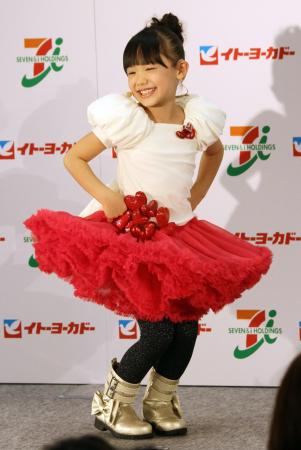 For Ashida (who was born in Nishinomiya, Hyogo herself), this was her first live event in the Kansai area. The event was originally limited to 300 fans, who were only allowed in if they bought her CD and were the first 300 people to arrive at the store. In the end, Ashida’s widespread popularity drew over 7,000 people, who all wanted to see her cute dance and adorable smile in person. Some fans even lined up in front of the store since 10:00 PM the day before, despite the rainy weather.

Mobilizing 7,000 people for such an event also is a new record for the shopping mall in Sakai. The previous record holder was Koike Teppei, who attracted around 6,500 people for an event in 2008. An official of the mall commented, “We’ve never experienced such a craze. Mana-chan’s popularity is incredible!” The press reported that Ashida also drew a lot of children her age as well, proving that she’s much loved by her peers as well as by adults. 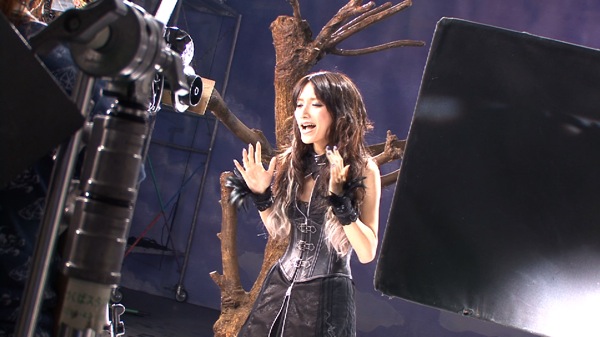 Singer Goto Maki is auctioning the outfit she wore in the PV for “YOU” through Yahoo!’s “Tohoku Earthquake Charity Auction“.

Goto will also wear this outfit on October 31st for TBS’s late night music show, “Coming Soon!!“, as well as at her album release event at Lazona Kawasaki on November 3rd.

The auction began on October 27th at 6:00 PM, and will end on November 2nd at 12:00 AM. Funds raised from the bid will be donated to the Japanese Red Cross Society through avex Management.

Back in July, Goto had auctioned off a pair of gloves she wore for a live event, and managed to garner 800,000 yen for charity. It’s expected that her “YOU” outfit will draw an even greater amount, since it’ll be her  final ’stage’ outfit before she goes on hiatus.

Meanwhile, Goto is scheduled to hold a special release campaign at ‘Don Quixote‘ stores in five cities nationwide from November 4th to the 6th.

source
Goto Maki has spent the past weeks blogging about sevral encounters with Takahashi Ai, Yaguchi Mari, and others in H!P/UFA. She even attended Dream Morning Musume concert in Nakano, on stage.

Even Tsunku♂ tweeted a picture of them holding a private reunion! Such an interaction between two labels (Avex and UFA) has surprised netizens and made them wonder whether this is mutual promotion or something else.

Inevitably, the media started arousing all kind of gossip on Maki's future, and a rumor appeared that she might participate on NHK's Kouhaku along Dream Morning Musume. True or false, the industry insiders are sure that there is some huge surprise from Goto this year before entering hiatus.

About a week ago, it was announced that Takarazuka top star Kiriya Hiromu (Moon Troupe) will leave the company in April 2012. On Monday, it was revealed that the other Moon Troupe top star, Aono Yuki, will also leave at the same time.

Aono made her stage debut with the Takarazuka in 2004. She was originally part of the Star Troupe, but she transferred to the Moon Troupe in 2009. She and Kiriya became the Moon Troupe’s musumeyaku and otokoyaku, respectively, at the end of 2009, and they made their top star debuts together in February 2010.

Both Aono and Kiriya will perform for the last time in “Edward VIII” and “Misty Station,” which begin their run in February and conclude on April 22, 2012.

According to Sohu Entertainment news and 2ch, there has been a blogger who self identifies as 'KAT-TUN Kamenashi Kazuya's girlfriend' writing negative comments concerning the group's rivals Kanjani 8 which caused quite a stir among net fans. Thousands of comments have been left on her blog by fans of various Johnnys groups.

This user claims to be currently dating Kamenashi and knows all his secrets. This mysterious user said about Kame's new drama 'Yokai Ningen BEM' that it's not just a TV drama but a documentary of Kame. And that he is not a 'normal' person (but a yokai sort of extraterrestrial) Interestingly, she has also said that (because Kame possesses magic as an ET), he only needs to conjure a spell and would defeat rival groups like K8, NEWS, Hey!Say!Jump etc. 'Although he is a yokai and could easily abuse his powers to get ahead, he's still working diligently in acting and performing in concerts. Seeing him work this hard makes me want to cry' Such comments have not only angered other groups fans, even Kame's fans have exclaimed that this person 'is not fit to be his fan'.

Her delusional comments has spread quickly through the internet with mediums like Twitter and is causing some negative reactions to Kame like 'if he's an ET, then stop recording shows, we want to watch actual humans'

apparently she has also said that she only dated (and dumped) kame to get to matsujun.....