On November 23rd, rock band flumpool will be airing their very first online program on Ustream. The program will be held to promote their new single "Present", along with their Christmas live performance to be held at Saitama Super Arena on December 11th and 12th this year.

The program is a definite must for fans, who can no longer wait to listen to the new song and who are looking forward to the concert. Moreover, a number of big news are scheduled to be announced concerning their plans for 2012, so better not miss it! International film star Jean Reno (Léon: The Professional, Mission: Impossible, The Da Vinci Code) will play the robot cat Doraemon himself in the second live-action television commercial in the Doraemon campaign from Toyota Motor Corporation. The ad campaign depicts the characters of the classic children's manga Doraemon in live-action, two decades after they grow up. The second ad, "Nobita's Barbeque," will begin airing on Friday. In the second ad, Nobita and Shizuka go on their first date in a long time, but they miss the bus to the camp site, get lost in the woods, and have trouble with the camp stove. Fortunately, Suneo appears with his car to take them back. When Nobita bemoans his lack of a car back at home, his old companion Doraemon appears out his desk. After the two have their reunion, Nobita asks Doraemon to get him a car. Doraemon refuses, and when Nobita asks why, Doreamon replies, "You don't have a license!"
Reno dubbed the title character in Hayao Miyazaki and Studio Ghibli's Porco Rosso anime film in French. Child actress Ashida Mana (7) is setting aside her cute image to take on her first “villain role.” She has been added to the cast of the “LIAR GAME: Saisei” movie that is being released next year, playing a member of the organization going against the protagonist played by Matsuda Shota (26).
Last month, plans for the new movie were first revealed, with actress Tabe Mikako (22) taking over the heroine role instead of Toda Erika. The movie continues with the story from the previous drama series and movie, as the defeated Liar Game organization revives the game with the goal of getting revenge against the swindler Akiyama Shinichi (Matsuda).
Ashida will play the cool Alice, who works for the organization. It is said that Ashida will be holding back her trademark smile for the role.
The movie is currently filming in Ibaraki. Theatrical release is scheduled for March 3, 2012.

source: Tokyograph
---
ahh~ this reminded me of another evil!chibi! XD

too many interesting news today. Sorry for flooding arama. XD 
this song sounds so sweet,not on her new single maybe new album?

can't wait for his album,hoping for more success for him


Rooting for EXILE, aiko, PG, Iki, Nana and Mana-chan, and hoping that NIGHTMARE can get in the top 10!

Looks like another fierce singles competition next week, and the albums chart is looking good too. :)

Shukan Bunshun conducted a survey of 1000 people, and these were the results.

apparently yuko is #35 but idk where they got that from Singer Matsushiya Yuya has announced through his official website that he will be releasing a new single early next year!

According to the post, the new single will be titled “Kimi e no Love Song ~10nen Saki mo~“. It’s currently scheduled for release on January 25th. Additionally, Matsushita has announced that he will be releasing a new album sometime in February.

And the boy got a new look. Check it out! ;D

On November 17th, Arashi broadcasted their new CMs for Nintendo’s “Mario Kart 7”! This popular racing game will be available on December 1st in Japan and 4th in the U.S. for the Nintendo 3DS.

In these endorsement videos, the members of Arashi talks about various aspects of the game while playing it themselves. Arashi fans will definitely want to check out these hilarious CMs, and even go back to an earlier post with Ninomiya Kazunari cosplaying as Super Mario for ‘SUPER MARIO 3D LAND‘.

Check out the four CMs below! 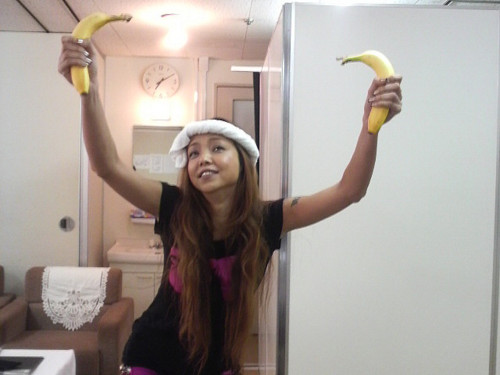 Check out the winners below!

The timing of the announcement of the MCs was likely behind the phenomenal record. In previous years, the announcement was made in early November - after the deadline for audience requests. This year, however, the announcement of Inoue Mao and Arashi as hosts was made on October 19, during the recruitment period. Popular group Arashi's concert tickets are hard to come by. Inoue focuses on her acting and is rarely seen on stage. As such, it seems that they were flooded with submissions from fans trying to catch this rare opportunity to see their idols in the flesh.

Amazing series is amazing and a huge part of my childhood ;__; it was such a blessing to be a kid in the 90's and I am so glad that Dragon Ball Z has it's own place in american pop culture.