This is the rest of SayuReina's Christmas dinner show. It's 87 minutes of magic and torture. ~*~ENJOY~*~ 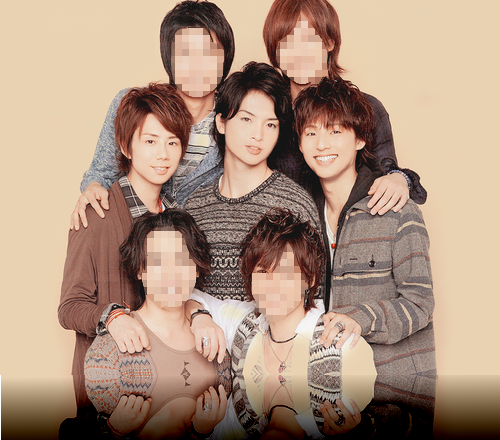 VOTING ENDS TOMORROW
It's like a senbatsu except you don't need to spend like $4,000 to get 210 votes in
Updates:
CAN WE DO IT? YES WE CAN.
source
source
idea originally stolen from the mothership
arama originals tag? Johnny's star Yamashita Tomohisa came to Shanghai on Dec. 29th to pre-record for a New Year's countdown special on Shanghai's Dragon TV station. He said a few phrases in Chinese and Shanghainese to the elated local fans. In addition, he gave a brief interview backstage and he was asked if this is a step leading to Johnny's entrance into the Chinese market and whether he had any Chinese actors or directors he wanted to work with. He denied any knowledge of the jimusho's plans and replied that he wanted to meet his Chinese mainland fans.

The latest episode of Hello!Pro Time reveals a PV preview for Morning Musume's latest single, Pyoko Pyoko Ultra. The single is Momusu's 48th single and is slated for a release on January 25th.

I'm still not overly fond of the song, but the PV looks cute. :) It does definitely give me the vibe that we're moving into yet another new Momusu era in any case. Sho's been promising us for ages he'd show us his grand return to piano playing. What a way to fulfil that promise!

Edit: Fixed Sho's message to reflect the changes made to the Kouhaku site.

Another video has been released by Mobekimasu Official Youtube channel.

In the new video, the girls address who they think as the most outstanding performer among the twelve newcomers.

Another newly added video after the cut.

This is the early impression of 2ch Netizens regarding who is the best dancers/performers.

It’s no secret that Japan is the country of vending machines (they even have models like this one now), but this is new: Tokyo-based beverage company Asahi Soft Drinks took the wraps off a vending machine [JP] that not only offers drinks but also sends out Wi-Fi signals within a 50m radius.

The Wi-Fi will be available for free, is accessible with multiple devices, without registration, and for anyone to use (meaning users won’t have to buy any drinks to go online through the machine). It’s possible to use the web for about 30 minutes before the machine cuts you off (re-connecting is possible, however).

After logging in, users will see various location-specific information on the home screen, for example on local stores, or sightseeing spots.

Starting in 2012, Asahi will set up 1,000 of the vending machines in five different regions in Japan (Tokyo, Sendai, Chubu, Kinki, and Fukuoka) in the first year. The plan is to roll out a total of 10,000 units in the next five years.

Asahi is currently operating 250,000 vending machines all over Japan. 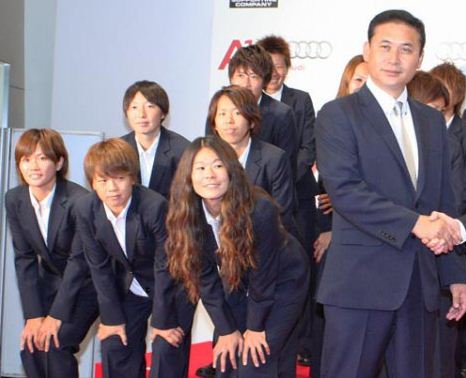 The players of Nadeshiko Japan have been confirmed as special guests for the 62nd Kohaku Uta Gassen, where they will “kick off” the competition during the opening.

Seven players in total are scheduled to appear at this year’s Kohaku: captain Sawa Homare, Kawasumi Nahomi, Ohno Shinobu, Kaihori Ayumi, Kinga Yukari, Tanaka Asuna, and Takase Megumi. Since the team will be playing in the “All Japan Women’s Football Championship” on New Year’s Day, the appearance will give the team the opportunity to both thank their fans and announce their ambitions for the London Olympics next year.

Nadeshiko Japan’s head coach Sasaki Norio will also be making an appearance as a guest judge. It’s been reported that Koda Kumi and KENJI03 of rock band BACK-ON have officially registered their marriage!

According to their respective agencies, the staff registered the couple’s marriage at the ward office this past weekend. Neither Koda or KENJI03 plan to comment on their newlywed status.

In related news, Koda participated in the ‘Kohaku Uta Gassen‘ rehearsal on December 29th. She entered the hall wearing all black, and held her rehearsal privately. As she was leaving, Koda responded to reporters’ inquiries about her pregnant condition with a smile, sharing that she is in excellent health.

cute, I don't get Japanese weddings at all,but hope they have one and congrats!

this show is the best, and it had amazing lives this year safe AKB48 and KPOP, the other lives are realllly hard to find safe Dl'ing huge files but BENI and C'kay had awesome lives d^__^, wish more Jpop lives in general were uploaded on the internet tbh :@; More surprises comes from the new member of AKB48 family, which is JKT48. Not only they participated in the recent AKB48 version of Kohaku, but they will join their sisters to perform in the annual NHK Kohaku Uta Gassen. JKT48 and HKT48 will perform as backdancers for their senpai who will sing a medley consist of their hit songs like Kaze wa fuiteru - Flying Get - Everyday Kachuusa. A total of 210 members of the 48 family will be on the Kohaku stage, performing and showing their support for Japan.

Check out their rehearsal pic below! (those pink arrows and names are for JKT48 members, fyi):

thanks to the tips of

chibishun
So, that's why they're still in Japan and having rehearsals there. Go and make us proud, girls!
I'll love this year Kohaku more and more <3

and for all the haters/trolls/trolls-in-denial/horrible person/all-that-negative-energy who tried to rain on our parade, here's a message for you:

It was said that two SKE48 research students Kito Momona and Iguchi Shiori went to a Sexy Zone handshaking event on the 25th.
Fans who went to the event have been tweeting that they spotted Iguchi and Momo, 100% sure that Momo went but the Iguchi one might just be a lookalike (?)

its good to see some interaction between 48 fam and sxczone even though they are only kks!! im still going CRAZY

The Korean idol group 2NE1 has been honored with the title of "Best New Artist of the Year" at the Japan Record Awards on December 30th. According to local media reports, the decision to bestow this award upon the K-pop group was made by the Japan Composer’s Association.

2NE1 made their Japanese debut less than six months ago, and during the rehearsal for the awards show, the group expressed their great excitement for winning such a prestigious award, "We are so happy that we have been honored with such an amazing award, although we've only been active in Japan for a short while. In the future, we'll do out best to keep coming back to the Japan Record Awards."

The group is currently busy preparing for their performance to be held later at the awards show, which they described as "full of feminine charms."

2011 has certainly been a prosperous year for 2NE1, with two "Best New Artist of the Year" awards and a number of highly successful releases, fans are highly anticipating what the new year as in store for the quartet.