TOKIO has announced that they will be canceling the release of their new single, “KIBOU“.

The band posted an update via Johnny Entertainment’s official website, where they revealed that they decided to cancel the release of “KIBOU” for various reasons. “To those who have already pre-ordered the single, as well as to the stores and  staff, we deeply apologize for the inconvenience,” the group wrote.

As we reported earlier, “KIBOU” was scheduled for release on February 1st as TOKIO’s first single of the year. The title song is currently being used as the CM song for Yamato Transport Co., which stars the members of the group.

UPDATE: Now, it’s been announced that “KIBOU” will be released as a double A-side single with “Haneda Kuukou no Kiseki“.

The release of “KIBOU” was canceled due to various reasons, however, the band has updated their post on Johnny Entertainment’s official website explaining that “KIBOU” will be released at a later date to coincide the postponement of Yamato Transport Co.’s TV spot.

“Haneda Kuukou no Kiseki / KIBOU” will be released on February 29th. The single will include “Strobe” as its coupling track.

alternative link if this gets taken down or something

I hate the clothes, but the song is super fun!
Aww Kanana <3

The National Police Agency said Tuesday that the number of suicides in Japan in 2011 surpassed 30,000 for the 14th year in a row.

May saw the highest number at 3,367. The NPA said the three disaster-hit prefectures of Iwate, Miyagi and Fukushima actually saw a decline in the number of people who took their own lives, compared to 2010.

Source: Yoshikimusic1120
Very Yoshiki-like haha. I never complain to Yoshiki slow songs, this is good for me :D 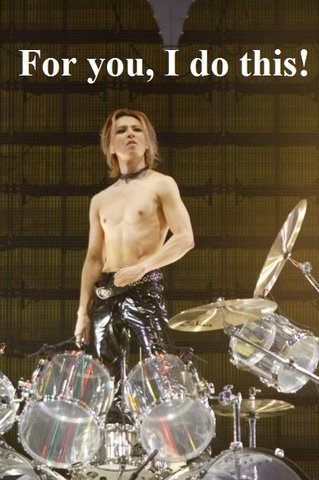 I'm sorry, but I lol'd at how cut up this was

I want management's head on a platter if this becomes a trend.

Picture says it all. Lushington Entertainment will be bringing L'arc to Singapore, date not confirmed yet.