Actor Ichihara Hayato (24) will star in a historical drama for the first time. He has been chosen as the lead of an adaptation of Tezuka Osamu’s manga “Hidamari no Ki,” with Narimiya Hiroki (29) as his co-star.

Set during the end of the Edo period, “Hidamari no Ki” tells the story of a friendship between a young samurai named Ibuya Manjiro (Ichihara) and a doctor named Tezuka Ryoan (Narimiya). The story is based on the life of Tezuka Osamu’s own great-grandfather.

Production is scheduled to begin on January 19 and finish in mid-February. The drama will be aired on NHK BS Premium sometime in April.

It was also recently announced that “Hidamari no Ki” is getting a new stage adaptation with Kamikawa Takaya and Kikkawa Koji. On January 15th, NMB48 announced that captain Yamamoto Sayaka will be making her “solo debut” with their third single, “Junjou U-19“.

“Jungle Gym” was written by AKB48 mastermind Akimoto Yasushi. It is described as a medium tempo ballad. This will also be the first solo song from NMB48.

Yamamoto expressed, “It’s a love song that I can relate to. If you’re a girl, you’ve probably experienced it at least once in your life… ”

Additionally, the coupling track by the Under Girls has been revealed to be “Baatari GO!”

we need new tag for this group After his highly successful third album D.M (Direct Message of Dance and Music), which outsold his previous two albums he will be releasing his 2011 Tour ～Synesthesia～ on February 22.

Check out the track-list and covers below:

I'm kinda interested in those 3 edition of singles...but I don't have the budget :3 And toripuru A + toripuru 7 = genius 8Db

On January 14th, visual kei band ﻿﻿the GazettE wrapped up their tour at Yokohama Arena, where they announced a 10th anniversary live and a new album.

the GazettE’s 10th anniversary live is called “10TH ANNIVERSARY THE DECADE“, and is scheduled to be held on March 10th at Makuhari Messe hall. As for their new album, “DIVISION“, it will be released sometime in August

As for their final concert that night, the band set the pace with “VENOMOUS SPIDER’S WEB“, an energetic track that immediately enlivened the crowd of 15,000 people. Fans started headbanging when RUKI called out, “Shake your heads!”

the GazettE performed 23 songs, mainly focusing on their latest album, “TOXIC“. RUKI expressed, “As much as the tour was fun, it’s still a little sad. 2012 just started, and the tour is over. This was the first live of 2012, and it’s over. This kind of thing is very the GazettE-like.”

The DVD for this concert is scheduled to be released on May 9th.

Many requests have reached the office concerning a travel package for the GazettE's anniversary performance long before it had been announced. Finally the waiting is coming to an end. Travel package and ticket sales have just started for members of the GLOBAL FAN CLUB, timely with the Japanese fan club HERESY!And for their 10th anniversary of course their needs to be a special VIP-plan, so check out the details:

On Jan 12th, SMAP appeared at the recording for Shanghai Dragon TV's Chinese New Year special. They performed classic songs 'Shake' and the Chinese versions of 'Yozora no mukou' and 'Sekai hitotsu dake no hana'

During the program they wore Chinese jackets, and tried their hand at various Chinese cultural activities, did Bruce Lee imitations, and wished everyone a good CNY. ( Collapse )
The program will be broadcasted on Jan 23 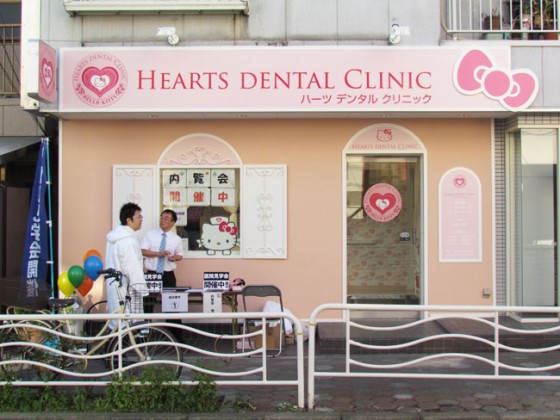 A Hello Kitty-themed dental clinic opened in Tokyo's Koto ward on Friday. The Hearts Dental Clinic features Hello Kitty imagery in every aspect, from the reception desk to the waiting room and the examination rooms.

The outside of the clinic is decorated in pink with an illustration of Hello Kitty wearing a nurse's hat. The dental office has three different rooms for patients: Kitty Pearl (used to discuss symptoms and treatment plans), Kitty Ruby (used for the actual dental treatments), and Kitty Diamond (used for implants and special treatments).

The clinic's representative said that he opened Hearts Dental Clinic because normally dental clinics have a "painful, scary image." He originally opened a clinic last November, but then remodeled it with the Hello Kitty theme during the new year. The clinic held an open house until Sunday. ITmedia's Netlab website posted more photographs in higher resolution.

LQ, but you get the idea.

Many, many moons ago (back in September 2010, to be exact) Aksys games conducted a survey about otome games to gauge interest in the genre. Then, in July 2011, the company announced that they would be localizing Hakuoki: Demon of the Fleeting Blossom, making it the first major otome game to be released in North America. Set in Kyoto in historical Japan and featuring the famous group known as the Shinsengumi, the game will featuring an intriguing blend of fact, fantasy, and, of course, romance. While a handful of fans jumped for joy at the announcement, countless others scratched their heads in disbelief.

The obvious question you’re probably asking is: “What on earth are otome games, anyway?” Otome, which literally means “young woman” in Japanese, is the term used to refer to a genre of dating simulation games aimed at a female audience. Many of you have heard of male-oriented dating sims, or bishōjo games, such as Tokimeki Memorial or LovePlus where the player controls a male protagonist to pursue one of the many potential girlfriends. In fact, the mention of dating sims probably conjures up images of shy-looking young Japanese men wedding lady friends in their DS and stories of how Japan’s declining birth rate is somehow connected to the nation’s males being more interested in 2D lovers than real women.

November "Walker Arts" magazine has announced the results of their survey on "Which celebrities are likely to have cosmetic surgery?". Ayumi Hamasaki announced on her official fan club site "Team Ayu" on Tuesday that she is getting divorced from Manuel Schwarz, an Australian actor. She is filing for the divorce in America on Monday (which would be Tuesday in Japan). The two had gotten married in a Las Vegas chapel on New Year's Day last year.

To my overseas fans,

I wish to inform you theat i, ayumi hamasaki, instructes my lawyer to file for divorce on my behalf in the united states today.

At the time of our marriage, my husband and I decided to live in the united states. However,approximatetely two months later eastern japan was struck by a huge earthquake. As a result of this tragedy, I felt an overwhelming need to stay in my home county, and was forced to leave my husband alone for a long time.

My husband and I have made every effort to reach a compromise;
However, as time has passed we have grown apart. I no longer feel the same desire to move to the united states. Instead I feel that I must ask myself what I can continue to do for my country, here in japan. This has eclipsed the future I had originally envisaged with my husband, and it is for this reason that I have made this difficult decision.

It was with a grateful, but heavy heart that I read all the messages I received form my fans and the press congratulating me on my 1st wedding anniversary at the beginning of this month. It was then that I realized I had to face up to the inevitable truth that I had been avoiding.

At present, my husband is in los angeles pursuing his career as an actor in Hollywood. I would ask that my fans to respect his privacy and refrain from sending him messages or contacting him to ask for comement.

Thank you for your cooperation and understanding.

Kanashiki Koi no Melody is the B-side for the 48th single, PyokoPyoko Ultra.