SMAP’s Masahiro Nakai may have a new girlfriend, it was revealed by Shukan Josei magazine in their latest issue, reports Sankei News and Chunichi Sports.

The magazine went on sale on January 17, and reports Nakai has been seen several times with a woman in her late 20s who looks like actress Ryoko Kuninaka.

The two had apparently gone on holiday in Australia earlier this month between January 4 and 9. It has been reported travelers on the same flight had said the woman looked nice, and had a calm manner about her. When Nakai had touched back down in Narita Airport, reporters had asked him about the woman, but the SMAP star stayed quiet.

Previously, Nakai had been dating singer Kumi Koda before the two broke it off in February last year. Sankei Sports newspaper has reported Nakai had met the woman (labeled “A-san”) through a mutual friend.

Since the March 11 disaster, Nakai has been spotted visiting the disaster site several times to help victims. It has been reported A-san had been seen accompanying Nakai during his visits to Fukushima in June and October.

Nakai’s agency, Johnny’s & Associates, has not released any statement.

Sweet baby jesus please let it be true. You don't even wanna' know how excited I get about dating rumours, especially if they involve ultimate-biases and jfc let these people lead their lives. :|

On the 9th of January, it was announced that there are 8 girls who have the chance to join PASSPO. This shocking news was made at a meeting with a few fans at the Universal Music building that was also live streamed. Here are the girls:

PASSPO will be releasing a new single out March 7th with the title 'ガチ恋 (Gachi Koi)'. There will be 2 versions and both come with 1 voting paper for fans to choose which girl they want to see join PASSPO, as well as a handshake event ticket.

Also being released on the same day as their new single is a DVD compiled with PASSPO's live shows as well as other clips including their major debut PVs and making ofs! There is also a special version of Shoujo Hikou that hasn't been released before!

On January 18th, SDN48’s Serina (26) made an appearance at the DVD release event for the movie, “The Speak”.

This thriller tells the story of six people who get trapped in a hotel and must find a way to escape. Consequently, reporters were inspired to ask Serina if she had experienced a ‘thrilling’ event of her own. In response, the idol referred to her upcoming graduation from SDN48.

“For me, to be in SDN48 and not knowing what will happen every day in this situation was kind of ‘thrilling’ for me,” she said.

SDN48 will bid their farewells on March 31st, but Serina is already starting her solo career through variety programs and gravure projects. She shared her future hopes with, “I would like to appear in a movie and would love to start a job as an actress.”

Speaking in a cute, high voice, she continued, “I would also like to do some voice acting as well.”

source
not my favorite song but definitely one of my favorite pvs by her, she is too cute and the song is really sweet

source of all the vids

"Supernova" is an unreleased V6 song performed during their 2011 live tour. The DVD is officially released today 20110118. 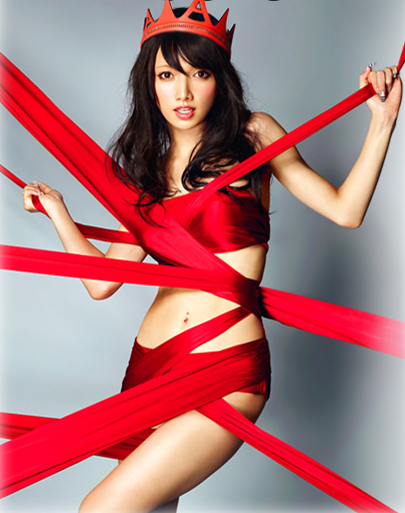 wow all 4 H!P songs made it and YES the shy guy in disc 3 is a cover of

The marriage between Manuel Schwarz (31) and Hamasaki Ayumi (33) which took place last year in Nevada on New Year's Day has ended in divorce, fulfilling the predictions of many spectators into the relationship. It was recently discovered that Hamasaki never registered the marriage in Japan, and the singer has been listed as single according to the registry of the national government. The singer went to the Middle East on the 16th of this month and will be back to Japan later this month.

The divorce was applied for on January 16 and was granted acceptance the same day.

Despite having an official marriage in the US last year and receiving a marriage license from the state of Nevada, Hamasaki never submitted the marriage application in her home country of Japan. In response to this, a spokesperson for the scandalous singer said, "Nevada was where they were wed and where the ceremony took place so we went through with the procedures of the state." The lack of registration, however, essentially means that Hamasaki was officially single. Popular dance and vocal group, EXILE have topped the albums chart again for the 3rd consecutive week with "EXILE JAPAN/Solo." This is the first time they achieved this feat since their debut in September 2001. The last time a group achieved this was 4 years ago by Kobukuro with "5296" (4 consecutive weeks at no.1 from 31st December 2007 until 21st January 2008).

In the singles chart, popular Johnnys duo, KinKi Kids extended their own Guiness World Book of Records with their 32nd consecutive no.1 single since debut, "Kawatta Katachi no Ishi." Successful producer, Akimoto Yasushi wrote the lyrics to the title track. Their debut single, "Garasu no Shounen" debuted at no.1 in July 1997.

Meanwhile, popular rock band, RADWIMPS achieved simultaneous no.1 ranking in both overall DVD and Blu-Ray Disc (BD) charts for the first time with "Zettai Enmei." Since the beginning of BD chart inception in July 2008, this is only the second time for any male group or soloist to achieve this since Mr.Children did it with "Mr.Children TOUR 2011 SENSE" last year (released on November 23rd). For RADWIMPS, the last time they achieved the no.1 position in the music-DVD chart was 4 years and 11 months ago with "RADWIMPS 4.5" (released in July 2007).

Way to go EXILE! And congrats KinKi Kids (though the numbers are pretty disappointing this time around). And a shoutout to RADWIMPS as well! XD

[Crunchyroll] Comics news site Bleeding Cool posted a comic shop advertisement funded by DC Comics, which goes the extra mile to sway fans from the dark side of manga. The ad features Cyborg and the Justice League in a rally to get YOU to buy American!

The ad for Orlando's A Comic Shop offers any new #1 issue of DC's mass "New 52" reboot when customers trade in any first volume of manga. One for one, ya dig?

[Sankaku] DC Comics and one of their more xenophobic comic shop minions have been caught playing with fire – their latest flier urges true American patriots to dump their slant-eyed yellow “manga” in favour of the all-American option of muscle-bound superheroes, by trading in traitorous foreign comics for a flag-rubbing DC Comics title.

Aside from the rather provocative tone of the flier, there may also be some potential lawsuits looming over the dangerously discriminatory “limit one per American citizen” rider, ironically enough considering the prominently featured “Robama.”

Note to take Sankaku with a grain of salt.

I don't get it, he wasn't even in the pv but his rap was okay, hot club banger remains hot!

Original Report: With almost 12,000 votes, vocaloid Hatsune Miku has taken the silver in TheTopTens' Singers You'd Like to Perform at the 2012 London Olympics Opening Ceremonies poll. The poll has received the site's most votes over the past seven days.

Source: crunchyroll
please go to the TopTens' website and vote for Hatsune Miku to sing at the Olympics.

But the news hasn’t sparked any talk on the internet, and it may be because the clothing line acted quickly and apologised before any gossip could start spreading, reports J-CAST News.

Around mid-January a shop attendant in a BEAMS clothing shop in Tokyo tweeted about Taguchi’s shopping trip.

“KAT-TUN’s Taguchi-san came shopping today, but he was talking to one of my seniors about how..', ‘honestly, I couldn’t care less’ and, ‘if it were Kamenashi-kun’, 'but in the end he apparently spent more than 200,000 yen so thank you for contributing to our budget, lol.” (translation)

The tweet has since been deleted, but judging by the tweets about it, it seems like Taguchi went shopping last Tuesday night (January 10).

It has been reported several people had complained about the tweet, saying it revealed private information about Taguchi, and another asking the shop attendant to stop making fun of him.

As well as deleting the tweet, BEAMS has released a statement on their website on January 12, apologising for the incident. It also says the company will carry out a harsh punishment for the employee in question.

It has been reported the shop attendant was simply using Twitter as a way to chat with a friend, and did not realise how visible the tweet would be to everyone on the internet.

seriously, how can anyone troll on pure Junno?
Collapse