‘Strangers 6′ is a joint production between Japan, South Korea, and China. It aims to reach new heights in terms of pace and sheer scale for a TV drama, by utilizing production skills and acting prowess from all three countries. WOWOW will broadcast the drama in Japan, and aside from South Korea and China, ‘Strangers 6′ will also air in a total of ten countries.

Japanese musician and guitarist Hotei Tomoyasu has written the main theme, “Strangers 6 Theme“, and an insert song, “Dancing With Strangers“, for the drama. South Korean boy group SHINee provides the theme song, “Stranger“, from their album “SHINee JAPAN 1ST ALBUM「THE FIRST“, while the South Korean girl group KARA sweetens up the suspense with various insert songs, such as “Sweetune” and “My Prayer“

I love it when Korea, Japan and China collaborate. They should do such dramas more often tbh.
Also, not sure what to tag this on.

AKB48′s next single, entitled “Give Me Five!”, will see members playing their own instruments – for the first time – in an 18-member big band unit Baby Blossom, the eminent Japanese idol group announced yesterday evening at the end of their Request Hour Set List Best 100 concert, streamed live on YouTube. The song was performed for the encore.

A secret project, members selected for Baby Blossom were first told about being part of the big band unit right after they wrapped up a live concert on August 28 last year. On Johnny’s net, it was announced that Kis-My-Ft2 is set to release their third single as well as their first album this spring.

No additional details for both the single or album have been revealed at the moment. However, it was also announced they will be holding a nationwide live tour which will start on April 1st at Marine Messe Fukuoka. You can check the schedule for the live tour here. (The schedule is subject to change).

Stay tuned for further details on their new single and album!

don't know why JE/ Avex toned down their image and made a 3/4 separation but i want fierce Kisumai back, Fire Beat & Tension should be in this album

will try to make a mega-post when the rest are out by Wednesday the latest (six more left)
I actually found them all, but some douche password blocked them and another on youtube butchered them with voice distortion and color screwing....idiots

If in 2007, manga was like a foreign movie star who had arrived on American shores to make it big, the last four years have been like watching that star run out of roles, run out of money, sell their house, go into rehab, and end up barely limping along in infomercials.

Dropping Sales
Manga sales in America have dropped 43% since 2007, an even bigger drop than domestically produced comics and graphic novels, suggesting that more than the bad economy is to blame. A few doomsayers like Toren Smith had claimed for years that the market was headed for a bust since publishers were glutting the market with too much junk.

Maybe the reduction in the amount of anime shown on American TV from the heights of 2003-2005 was another factor; licensed shows like Sailor Moon, DBZ and Pokémon planted the seeds of fandom in millions of minds, but as American TV producers saw all the money they were making, they decided it was more profitable in the long run to create their own anime-esque TV series like Voltron Force and Speed Racer: The Next Generation, so they get all the rights and don't have to censor panty shots. Mr.Children has announced that they will simultaneously release a new single and a live DVD/Blu-ray on April 18th!

Their new single, titled “Inori ~Namida no Kidou / End of the day / pieces“, will be their first in about 3 years and 7 months. “Inori ~ Namida no Kidou” and “pieces” are the theme songs to Ikuta Toma and Yoshitaka Yuriko’s upcoming movie, “Bokura ga Ita“.

Meanwhile, the live DVD/Blu-ray, “Mr.Children STADIUM TOUR 2011 SENSE -in the field-“, will feature the Nagai Stadium performance from their nationwide tour last year.

Mr. Children will be celebrating their 20th anniversary this year with the theme, “POPSAURUS 2012″. Previously, the band announced that they will simultaneously release two best-of albums and will embark on a nationwide tour. They have just revealed that the limited edition of both best-of albums will come with a DVD containing video clips.

Additionally, the dates and venues of “MR.CHILDREN TOUR POPSAURUS 2012” has been announced. The tour will kick off on April 14th at Kyocera Dome Osaka, and will wrap up on June 6th at Nagoya Dome. You can check out the full details below!

And it's a Dome Tour! How I wish I can go. Also a 3A-side single! And another SENSE DVD! Plus the 2 best albums in May! One of the big boys are returning with a bang, I'm more than happy! XDDD

MELBOURNE, Jan 23 (Reuters) - Kei Nishikori blazed a trail for Asian men’s tennis in the modern era on Monday when he became the first Japanese to reach the quarter-finals of the Australian Open in 80 years.

Nishikori stunned French sixth seed Jo-Wilfried Tsonga 2-6 6-2 6-1 3-6 6-3 to emulate countrymen Ryosuki Nunoi and Jiro Satoh, who made the last eight in 1932, and now faces Andy Murray for a place in the semi-finals.

“Hopefully I can be like Li Na for the men,” the 22-year-old said with a grin in reference to China’s Li, who became Asia’s first grand slam singles winner last year at the French Open.

“Honestly there’s a lot of good players in Asia and I am happy to get to the top from Asia,” added the 24th seed.

I was really surprised when I watched the match today. Tsonga is a strong man, but Nishikori was amazing, and I was really happy when he won. I feel like rooting for him for the next matches now ^^
I wonder if he'll inspire Konomi-sensei for The Prince of Tennis, if he hasn't already xD 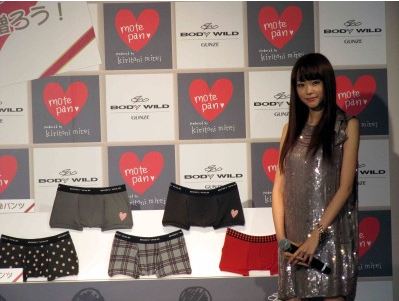 “Body Wild” is Gunze’s underwear brand that both men and women can enjoy. Aside from Kiritani being chosen as the new image character, Gunze decided to produce a special limited edition Valentine’s Day underwear.

Kiritani commented, “I was very honored to receive the news about becoming the image character! Shinohara Ryoko-san, whom I’ve looked up to, was the first image character, so I’m very happy to become the 11th.”

She continued, “Men who think about the fashion of their underwear are wonderful! I want to support things like that. To celebrate the Valentine’s season, we made underwear as gifts. We made both ‘honmei’ (real) and ‘giri’ (obligatory) underwear!”

It’s been announced that Arashi will be releasing a new single titled, “Wild at Heart” on March 7th! The song is being used as the theme song for member, Matsumoto Jun’s ongoing “Getsu9″ drama “Lucky Seven“.

According to the Johnny’s website, the single will be released in two editions; a limited edition that will include a DVD, and regular edition.

Below is the details that were released on the upcoming single, and further details will be announced later.

the new single will be released February 22

........L-O-V-E Jamosa but two albums, lol she and avex are being dumb and overambitious, anyway this song is flawless, makes us all forget the atrocity with flop-Kissv
Collapse