On January 26th, Akanishi Jin and Kuroki Meisa’s agencies released official statements regarding the recent rumor about a possible relationship.

News outlet Sponichi (or ‘Sports Nippon’) broke the news about an alleged date at Tokyo DisneySea and possible romantic relationship between Akanishi and Kuroki on January 25th. Naturally, all of the outlets now tried to get an official statement from both of their agencies. Sanspo was one of the first to publish their statements online.

Lol, let's just hope this is a good publicity for their albums/projects. This time the stage is Okinawa!
The golden combination of poison-tongued butler Kageyama and lady detective Reiko are back, to solve their most difficult mystery yet!
Kageyama's poison-tongue will also get a special power up!
Not to mention, a surprise love romance!?
"Pardon me..., but are Ojousama's eyes Mensore?" (Mensore=Welcome in Okinawa dialect)
( Collapse )

First the "Blackboard" drama announcement and now this? Poor Sho-kun is going to be busier than usual. I hope he gets enough sleep!
I wonder if this means that NazoDi will have a chance to get a Season 2... I want answers to my questions such as "Why is Kageyama a butler?" and "How did Kazamatsuri become a chief when he is so incompetent?!?", etc. But, regardless... Yay Sho!!!\(^o^)/

The Motion Picture Producers Association of Japan (also known as Eiren) released its annual report on the movie industry on Thursday. Box office revenue in 2011 fell nearly 18% from the previous year, due to various factors, particularly the devastating Tohoku earthquake and tsunami.

The industry’s box office gross had reached a record high in 2010 at ¥220.7 billion, but in 2011 that figure dropped by 17.9% to ¥181.2 billion. For the first time in 18 years, the number of screens in movie theaters dropped, down by 73 screens to a total of 3,339. It is reported that 40 of those were in theaters closing or being suspended due to the earthquake and tsunami.

The number of movies released in 2011 actually increased from 716 to 799, but the relative lack of big hits (such as “Avatar,” “Alice in Wonderland,” and “Toy Story 3″ in 2010) resulted in a lower box office gross. Attendance dropped by approximately 30 million, down to a total of 144.7 million tickets.

For the 4th year in a row, domestic films beat out foreign films, making up 53.6% of the total box office gross. However, the top three films of the year were all foreign films, and the highest-grossing Japanese film was Studio Ghibli’s “Kokurikozaka Kara” at #4, earning ¥4.46 billion. This is the first time since 2000 that no Japanese film has reached the ¥5 billion mark.

HEAD PHONES PRESIDENT has announced plans for a new album and US tour this spring.

The tour will kick off with HEAD PHONES PRESIDENT headlining at MTAC Omega, the biggest anime convention in Nashville, Tennessee, from April 6th to 8th. Then a full US tour will follow. Further details on the tour have yet to be announced.

In addition, HEAD PHONES PRESIDENT will also release their first full-length album in five years this spring. This album marks the band's move to the label Radtone MUSIC, the international rock label of Media Factory. A special version of the album has been slated for a US release. More information on the album will be revealed in the coming months.
Source: jpopasia via intuned.com

K-Pop darling IU will soon be making her Japanese debut! Koreaboo reports that the singer is due to release a Japanese version of her hit song "Good Day"!

The single will come in different versions, and will also include a Japanese version of "Rain Drop".

IU, who recently signed on to EMI Japan, is set to make her splash in the Japanese music industry come March 21st!

don't know her,she is kinda a cross between Taylor Swift and Meada Atsuko As reported earlier, Matsushita Yuya will be releasing his 2nd album on February 22nd. Recently, new details on the release have been revealed, including the album’s title.

Check out the new details on Matsushita Yuya’s “2U” below:

A bit dissapointed 'coz Dream on Dreamer isn't included. But still...I want both limited edition. Need to find ways to grow money on trees :3 This spring, singer JUJU will perform on the show “MTV Unplugged” in the U.S., it has been learned. Although many Japanese artists have performed on MTV Japan’s version of “Unplugged,” JUJU will be only the second Japanese artist to appear on the U.S. show.

“MTV Unplugged,” which showcases popular artists performing acoustic versions of their songs, has been on the air since 1989. Hirai Ken became the first Japanese artist to appear on the show in 2003, but no others have been on the show since then. Her performance is planned for this spring in New York, but no specific date has been announced yet.

JUJU once lived in New York, moving there at the age of 18 to study music. It is even said that she was there at the studio where Hirai Ken performed his “MTV Unplugged” set.

Basically those "unknown" needing more love artist no one bothered to post about....
The first for this year^^
though honestly, either i didn't look hard enough cuz i only like around 2 :/ On February 22nd, R&B singer Shimizu Shota will be releasing his new single, “Kimi Sae Ireba“, which will feature singer-songwriter Oda Kazumasa as a special guest.

The collaboration was put into effect after Shimizu appeared on the TBS annual Christmas program, “Christmas no Yakusoku“, back in 2009. Shimizu directly approached Oda, whom he respected both as a singer and a person.

“Kimi Sae Ireba” was written and composed by Shimizu himself. Meanwhile, Oda was in charge of the production and arrangements. The bonus DVD for the limited edition will contain footage of the two in the recording studio.

Shimizu commented, “It’s a really simple song that I made while feeling the greatness of ordinary music. It’s a very positive song. I pray that it will reach the hearts of many people.”

Additionally, the single will include a cover of Nakajima Miyuki’s “Keshou” as its coupling track.

Prior to the CD release, “Kimi Sae Ireba” will be available in Chaku-Uta form on February 1st.


source
if they do some dumb typical J-ballad pv with them not in it I will scream
anyway can't wait!

sad T__T went from 200k to 5k in 3 years, they are good I dunno why Japan won't LOOOOOOOVE THEM
doubtful, hopefully avex promotes this like crazy and they gain new fans or they are gonna face the same fate as Day After Tomorrow 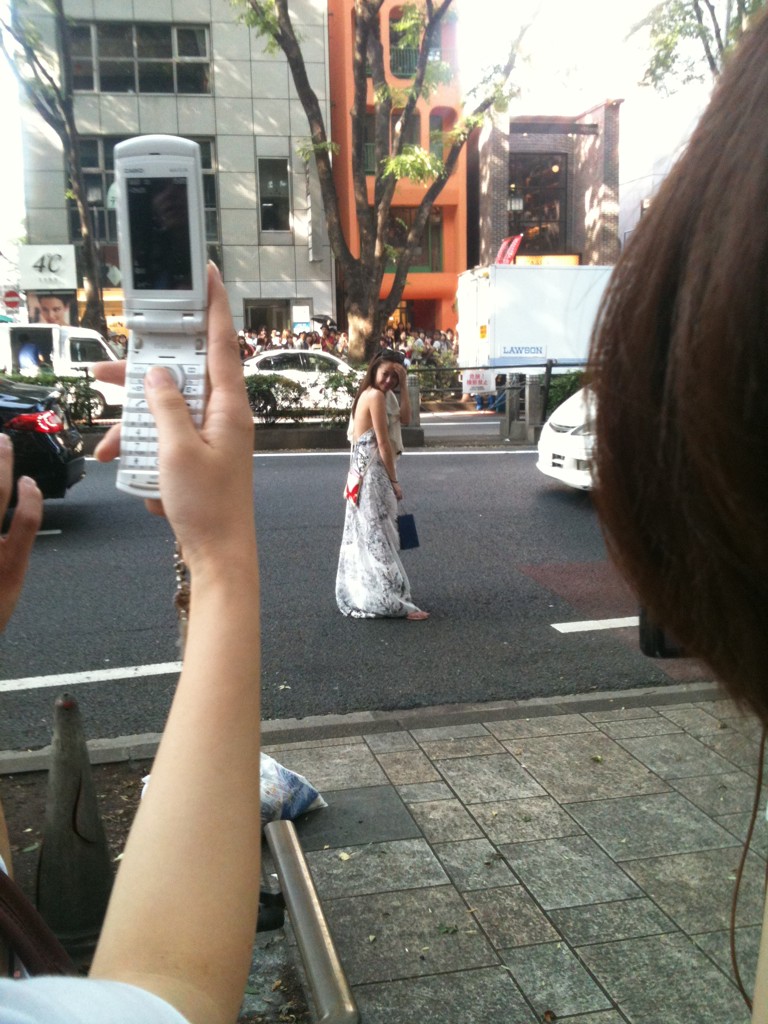 The colorfully candid and always audacious Sawajiri Erika was recently caught out for the shopping in Harajuku. The starlet-slash-sweetie pie wowed throngs of onlookers as she walked through the streets, giving fans a tantalizing taste of her mega-watt star power.

Donning a flowing, floral frock, Sawajiri gracefully galloped through traffic, causing both pedestrians and drivers to stop and gaze at her effortless elegance. Fans could barely control their excitement, snapping picture after picture of the amazing display. Pictures taken by onlookers flooded Twitter and other social media sites, causing the appearance to become a hot topic recently.

Fans reportedly took particular notice of Sawajiri's hair, with some commenting that it looked like she had just gotten her hair relaxed. The mesmerizing mogul is famously half Algerian, and her African roots usually give her a more natural, ethnic look, but onlookers were impressed by the silky texture of her recent hair relaxing treatment.

No, Thank You!!! not only has the best name for an ero game aimed at females ever, it also has a unique feature: An "On/Off" choice for arm hair during sexy "event scenes".

So, if a lady player likes macho Maki, but hates his hairy arms, she can select a smooth armed version of the brawny hunk. No thank you, indeed.

Boys Love game No, Thank You!!! goes on sale for Windows sometime this year.

Open to: All, detailed results viewable to: All. Participants: 572