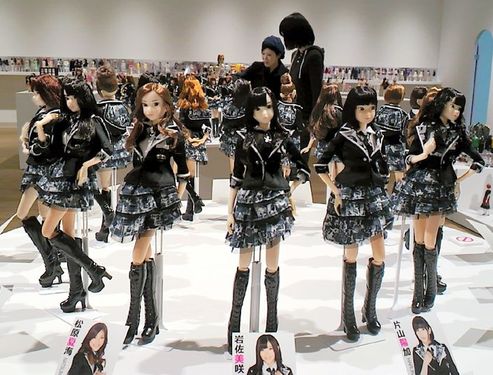 Creating an icon of an idol is never an easy task--the slightest details are scrutinized by fans--let alone trying to create 48 of them.

But a Japanese design company has gone ahead and done just that, and the dolls--designed to resemble each of the 48 members of female idol singing group AKB48--are a hit at an exhibition at the Kyoto University of Art and Design. 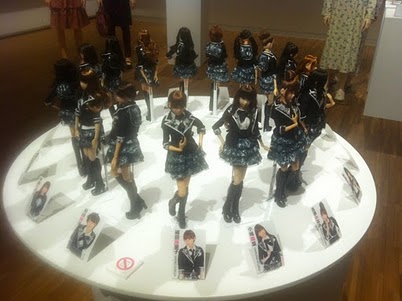 DBSK fans have caused an interruption in the production for the movie Changmin has been shooting alongside Japanese actor Tsumabuki Satoshi.

RnB star BENI is releasing a cover album of popular Japanese songs sung by male singers, the interesting twist  here is that she will be singing ENGLISH covers of these hit tracks, so far the tracks to be included are "Sakurazaka (Masaharu Fukuyama)," "Hitomi wo Tojite (Ken Hirai)," "Robinson (Spitz),", LA LA LA Love Song (Toshinobu Kubota) and "TRUE LOVE (Fumiya Fujii),".

will be released March 21.

With all the reports of Kuroki Meisa and Akanishi Jin floating around these days, it’s hard to avoid talk of the couple if you are a fan of either of them. But in actuality, it seems that Meisa wanted to get with Jin’s good friend Yamashita Tomohisa at first.

Last yr, she was rumored to have stolen Kobayashi Kamui from Abiru Yui but she realized that he wasn’t the one and dumped him faster than one of his cars.

2011 alone, she was rumored to have been with 5 men. Kis-My-Ft2’s Kitayama Hiromitsu, actor Shinoda Mitsuyoshi, some elite banker, her co-star Itou Hideaki and Kobayashi Kamui.
( Collapse )

I normally hate Furage, but I like her version of it.

MomoClo just keep getting better and better. Not enough love for them, tbh. Release date is 03/07, btw.

Have not made a post in all of LJ since forever so I can't bear to know that news of real musicians goes unnoticed and unmentioned forever. I didn't even know this until when I randomly decided to go check out their website just now.

Looks like Kobukuro is (kind of) back from their hiatus!!! And their new digital single Mitsubachi (Bee) has been released on Renchoku on January 27!!! Its CD release date has yet to be decided.

The song Mitsubachi, a song about the importance of the connection between people, is the CM song for NTT West. It was released digitally along with a guitar version of "Ryusei" on January 2011. Mitsubachi's ringtone has been available for download since December 14, 2011.
( Collapse )

Johnny’s fans probably know by now that a part of Marching J’s proceeds are going towards renting two pandas from China. Well, make that 5 billion yen worth of proceeds from their various charity events and donation boxes are going towards that cause.

Fans have been really displeased with that decision, some even accused the agency of fraud. There have been various speculations on why so much money is going towards renting pandas. (I can’t deny that they’re damn cute… but what does that really do for the disaster stricken areas?) Some fans are going as far as boycotting any future charity events unless they promise to put the money towards something more productive.

One is that Matchy was put in charge and this was just him showing the world that he has power within the agency. We all know Old Man Johnny is going to keel over sooner or later and a heir has not yet been decided, and Matchy seems to be part of the candidate list for taking over.

Another reason is that JE is looking towards expanding to other Asian countries in the coming years and this is all part of the grand plan to build up a good image for their potential markets. So really, the money wasn’t spent for the good of the Japanese people, but for the good of the company.

Either way, people are hoping that future proceeds won’t go towards such projects and instead be put towards rebuilding.

Rock band SPYAIR has revealed the PV for their new song, “My World“!

Spyair haven't got their own tag D: Colour me shocked...
Collapse