“Yokomichi Yonosuke,” a novel by award-winning author Yoshida Shuichi, is being adapted as a theatrical film by director Okita Shuichi. The movie will star actor Kora Kengo with actress Yoshitaka Yuriko as the heroine, bringing them together for the first time since “Snakes and Earrings” in 2008.

Yoshida is well known for several works that have also had movie adaptations, including “Parade,” “Christmas on July 24th Avenue,” and “Akunin.” “Yokomichi Yonosuke” was originally serialized in The Mainichi Shimbun between 2008 and 2009, and it won multiple awards when it was released in book form in 2010.

For the movie adaptation of “Yokomichi Yonosuke,” director Okita is handling the screenplay, together with playwright and author Maeda Jiro. The story is set during the 1980s, following the life of a good-natured college student named Yokomichi Yonosuke (played by Kora), who has come to Tokyo from Nagasaki. Yoshitaka plays his girlfriend Yoko.

Principal photography is scheduled to start in late March. Theatrical release is slated for 2013. It’s been announced that actress Nagasawa Masami will star in a new TV Asahi drama called ‘Toshi Densetsu no Onna‘!

Nagasawa has taken up the the role of ‘Otonashi Tsukiko‘, an unconventional female detective for the MPD’s Criminal Investigations Division 1. Otonashi has a mania for urban legends, and only became a detective because she wanted to prove or bust the legends. Somehow, she always manages to find a connection between unresolved cases and various urban legends, such as the legend behind the head tomb (‘kubizuka’) of samurai Taira no Masakado.

Nagasawa expressed that she’s always wanted to try out the role of a female detective. Moreover, she personally loves urban legends, and so there wasn’t much hesitation on her part when she received the offer for this role.

“Urban legends are exciting and fascinating,” Nagasawa commented. As for the ‘urban legends’ (or rumors) related to the actress, Nagasawa said, “Most of them aren’t true, but I don’t take them seriously and just think to myself, ‘Since people are enjoying them that much, why try to take away the fun?’”

She continued, “This time I don’t want to hold back anything and add a lot of ad-libs and many little jokes.”

Nagasawa will be supported by Mizobata Junpei, who will play a guy from forensics who’s completely taken in by Otonashi’s charms. Furthermore, one of her superiors will be played by Takenaka Naoto.

Mizobata revealed that he loves urban legends related to history. He promised future viewers that,  “I will devote myself to this drama, so that it will help people to loosen up at Friday night after another long and tiresome week.”

Starting in April, TV Asahi will air ‘Toshi Densetsu no Onna‘ every Friday night at 11:15 p.m. Each episode will feature a new case and its solution.

It's been announced that Fuji TV's popular drama, "Ninkyo Helper", will get a movie adaptation!

"Ninkyo Helper" revolves around a Yakuza member named ‘Tsubasa Hikoichi' (SMAP's Kusanagi Tsuyoshi), who suddenly gets ordered by his boss to work as a caretaker in a senior citizens' home. The drama grabbed viewers' attention immediately, since Kusanagi, who's known to have a "good person character", was cast as a cruel Yakuza. In the Kanto region, it pulled an average rating of 15%, with the highest being 17.8%; its special episode, which aired in January 2011, also pulled an average rating of 12.5%.

Though the story was technically completed with the special episode, fans sent in a flood of requests for a sequel. Therefore, it was decided that the drama would return as a movie. The movie will pick up from the end of the special episode with many new action scenes.

Director Nishitani Hiroshi will return to the set for the film adaptation, but most of the original cast members will be replaced. Kuroki Meisa and Kusanagi will be the only cast members retained. Fans can also look forward to new roles picked up by Sakai Masaaki, Kagawa Teruyuki, Yasuda Narumi, Kaho, and Kazama Shunsuke.

The movie version of "Ninkyo Helper" will be released in November.

Apparently, there's no #5 in album's rating this week according to the official site lol.

I don't think any album will reach 100k next week, and I do think it will be pretty tight between Tokyo Jihen and chatmonchy for the top spot. And while it's another 48 onslaught in the singles chart, pretty surprising to see Ieiri Leo ranking in the NINKI. Also, it'd be interesting to see how Meisa will do. 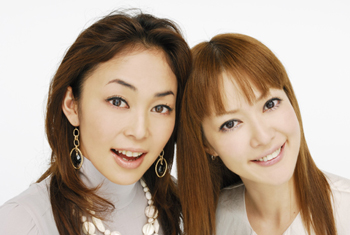 Nakajima Tomoko has been absent from the entertainment industry since last April. Last week, news leaked that she has accumulated a staggering amount of unpaid rent. But her mental problems are more worrying than her financial woes.

“Her contract dictated that she doesn’t earn a dime during her rest, which can’t be helped but the reason behind all her recent troubles is the illness that caused her hiatus. She can’t live a normal healthy life because of it.” Says a person closed to Nakajima.

A friend who visited Nakajima recently said that she was totally unresponsive and had tape all over her face during the visit. When the Fukuyama Masaharu rumor broke, reporters were outside the building for a whole week hoping to get a scoop. Since Nakajima and Fukuyama live in the same building, they were thinking they’ll catch a glimpse of her too. But she never went outside the building, not even once.


love her even her last single grew on me so much,this album is gonna be good !

I’m not saying that I overtaxed myself in previous relationships but I think I may have been trying too hard at some points.
Being able to relax completely means I can be completely honest around him. That’s definitely also because he loves me sincerely and openly.

When we’re together and when we’re apart, my heart grows warm and my mind feels at ease simply by feeling him. Feeling this at home every single day made thinking about marriage only natural.

Our life together has only just started. I want to continue sending “songs of love” to everyone while spending my life fostering love together ♥

omg she is so sweet ;@;
happy early Valentine's Day o/

As you know, the nationwide tour started on January 18, and we really appreciate the many hearty messages and meaningful opinions about it we have been receiving through the questionnaire survey.

Also we are very pleased that we are receiving a lot of new applications and renewal applications for the official Fan Club "Bigeast" every day. Thank you so much.

In consideration of the above situation, we have decided to add one extra show for each of Tokyo Dome and Kyocera Dome Osaka in April. In total, they will have six Dome shows (three days each)!

We hope as many people as possible have a chance to see Tohoshinki's performance on this occasion.

This will be the biggest nationwide tour in the Tohoshinki's history (26 shows across 11 cities nationwide, aiming to have 550,000 people).

We hope you will enjoy the last shows of the tour to be held in Tokyo Dome and Kyocera Dome Osaka!!

Please note that the tickets for the additional shows will be on sale beginning on February 9
(Thu) at 15:00, the same time as for other Dome shows.

We would appreciate your further support for Tohoshinki. 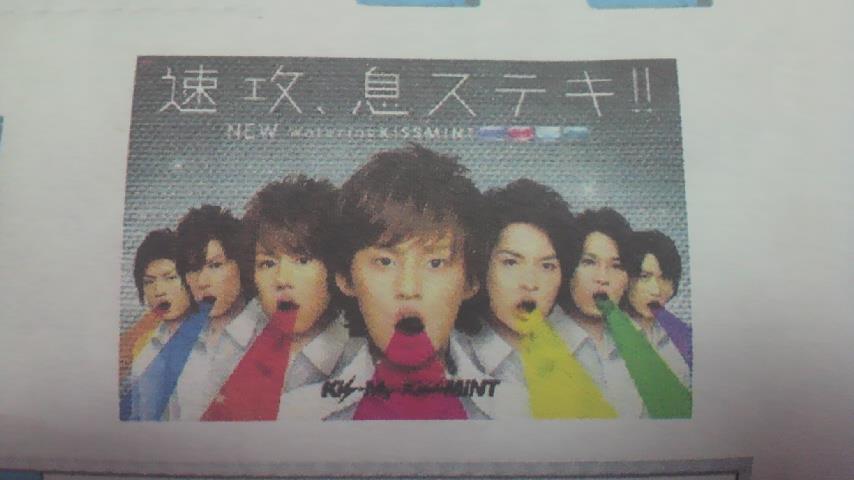 Kis-My-Ft2's first album, "Kis-My-1st" and 3rd single, "SHE! HER! HER!" will be accompanied by a special promotional campaign throughout the coming months. The campaign was announced by avex and Johnny's Entertainment and became a hot topic recently.

A special favor will be included in each single, allowing fans to enter a raffle for special events that will occur accompanying each tour date. The events, "Kis-My-Party" will be held in every city for fans to enjoy.

For those buying both the single and the album, they will receive an invitation to join a lottery for access to the special "Cho Premium! Secret Event" that will occur at a later date. Details on the special party have yet to be announced.

The boys will also be promoting special mints, called 'Kis-My-Mint.' A photo of the advertisements that will accompany the new hot product has leaked recently on Chinese fansites.

omg I need these mints!

the full song is actually catchy.
but uhhh Pi, you sure it was really necessary to go solo for stuff like this? What's also the point of transferring to Warner Music? They're giving you the same boring debut(post-NEWS) PV as Jin. At least I did dig Daite Senorita & Loveless before, even One In a Million is addicting.