After the first installment, I decided to continue on. But this time listing the notable celebrities that are gyaru, are influence by gyaru and who influence gyaru. As for my intentions? Well I plan to give a little idea of how some of these women are considered gyaru. I know I stilll have more ground to cover, does anyone want to make a request? 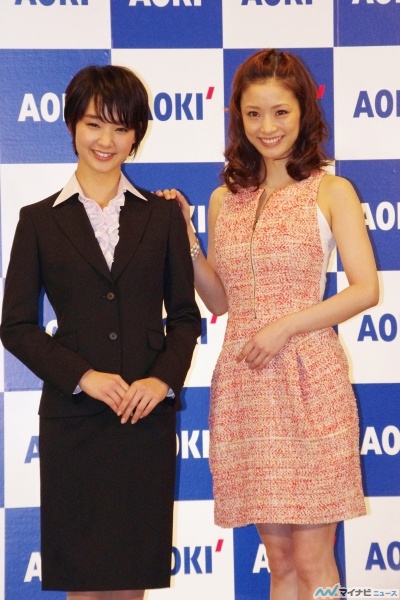 Actress Aya Ueto (26) is happy to have a 'sister' for the new ad campaign for clothing brand AOKI.

Ueto and Ayame Goriki (19) who belongs to Ueto's agency, will be appearing in the new TV commercial campaign, wearing suits.

"A lot of people have told me that Ayame looks like me,” Ueto said. "It's like I'm looking at me a long time ago." Goriki gushed: "I'm so happy that I look like Ueto. I feel like we are sisters." 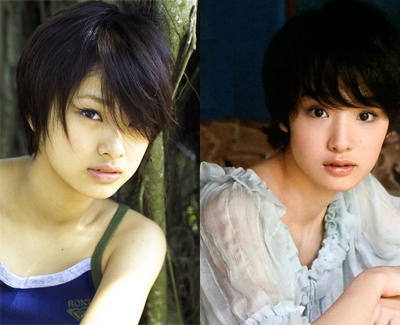 Open to: All, detailed results viewable to: All. Participants: 231

Do they look alike? 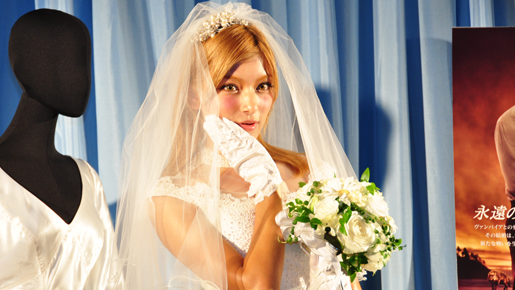 On February 13th, popular model Rola (21) attended a female-only private showing of “Twilight Saga: Breaking Dawn Part 1”, which is scheduled to be released on February 25th.

As there is a wedding ceremony scene in this particular movie, Rola showed up in a wedding dress at this event.

Although she denied having a boyfriend, Rola admitted that there is a guy who is interested in her right now. Regarding this fact, she confessed, “I think he is a nice person but I am a bit troubled.” Then she was asked by one of the reporters, “If you do begin a relationship, would you report that to your agency?” In response to this inquiry, she smiled and said straightforwardly, “I would since I am scared of what might happen.”

Wasn't expecting them to ask that question, tbh. 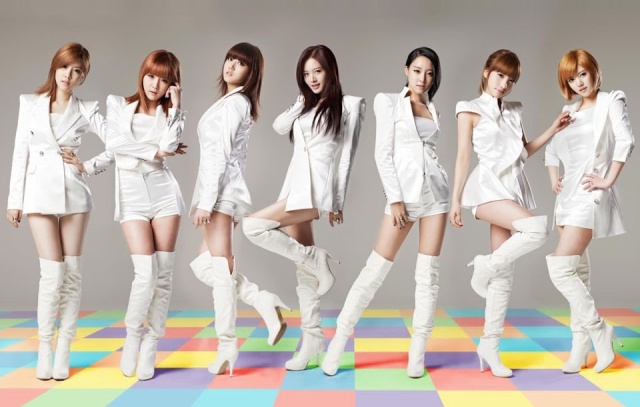 You can pre order it in CDJapan: 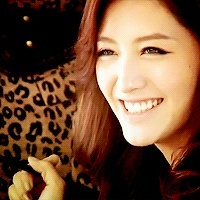 I really like it! this is Rainbow's first Japanese original song and is superb :3

she slayed them, her voice sounds amazing
can't wait for the album

It is no secret that AKB48 bans its members from having boyfriends (although that doesn’t seem to deter some of the members) and the rumors of Oshima Yuko and Eiji Wentz have been swirling for the past year. Apparently, the two are more than just friends, and during the new year vacation, Yuko and Wentz went on vacation together to a hot spring in Ishigawa, along with their respective families.

Apparently Eiji and Yuko have known each other since they were little, and even though Yuko is extremely busy during the year, their relationship is still going strong. Even though their agencies claim that they’re just really good friends, people can’t help but wonder if things are really that innocent between the two. With Yuko being one of the most popular members of AKB, being in a relationship can potentially damage the group’s popularity.

Actor Tamayama Tetsuji (31) announced on his official website that he got married on Valentine’s Day, February 14. He stated that his wife is a non-celebrity whom he had been dating for a while. He further revealed that they are already expecting a child, though he did not say when the baby will be born.

Because his wife is not in show business, Tamayama stated that he does not plan to reveal her name or show photos of her. He also said that he does not have plans for a press conference regarding the marriage.

Tamayama was previously rumored to be in a relationship with actress Kuriyama Chiaki, but they broke up during the fall of 2010.

Aya Ueto graces the cover of the 4th issue of the fashion magazine MandW! 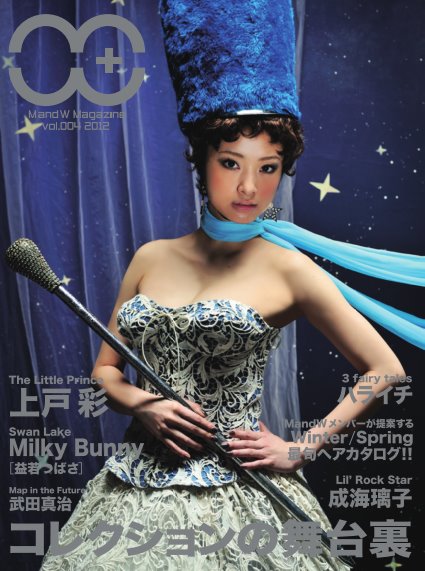 wow this rox, i luv it

LJ pic is not working for me, so I had to use imageshack to upload the pics. Sorry to those who can't view them.

Anyway, congrats Laruku (though I'm not a fan of the album), PG, THE BAWDIES, NMB and NAOTO INTO RAYMI! Also happy to see ayaka and Sonar Pocket staying strong, and EXILE especially for surpassing 7th week's sales of the previous album yet again! :)

TV Asahi has just announced that they are going to adapt the mystery masterpiece ‘W no Higeki‘ into a prime time drama series next season, starring the young and busy actress Takei Emi.

‘W no Higeki‘ is based on a mystery novel of the same name by Natsuki Shizuko, which sold over 2.5 million copies. It was already adapted into a movie starring Yakushimaru Hiroko in 1984 and a drama special starring Kanno Miho in 2010. For its first adaptation into a drama series, scriptwriter Terada Toshio (“Koshonin”) is going to make a few changes to fit it into the present-day society and to create an all-new exciting viewing experience.

For Takei this will be her first starring role in a prime time drama and moreover it’s going to be a double role. She commented, “I’m looking at the double role as a great chance to gather more experience and to test my own acting abilities. It’s just great to be able to play two different roles at the same time.”

Takei is going to play the roles of ‘Mako Watsuji‘, the daughter of a very wealthy and powerful zaibatsu, and of ‘Kurasawa Satsuki‘, a girl raised in an orphanage with a desire of revenge burning inside her heart. Due to the fact that they both look absolutely identical, they decide to change places in order to experience each other’s completely different lives. Their little experiment is followed by various tragedies and other incidents.

She commented, “The daughter of a major zaibatsu and a show club dancer. I haven’t played anything similar to both roles so far. The producer told me that he wants to me show my evil side as best as I can, so I think that I’ll have a lot of fun showing everyone a new side of me. Personally I’d love to discover an unknown side of me as well! (laughs) I hope you will look forward to the drama and my performance. I’ll do my best!”

Sayumi also produced her own bunny character “Sayu Usa” and gave away chocolate as a present. She commented that she’s wanted to make a cute character and that doing a collaboration with Cinnamonroll is like a dream.

This summer in August will be Morning Musume.’s nation-wide tour and before that, leader Niigaki Risa will be graduating from the group in May, so Sayumi feels that her time is now (to be leader) and really wants the position.

Do you think she will be the next leader?

We posted last month that AKB48's Producer Akimoto Yasushi was considering hiring lyricists to help with the songwriting for the 48' groups. In the same article were hints of things to come - Cultural Festival, Art Club, and more.

On Wednesday February 8th, he announced on his Google+ that an AKB48 Art Club will be established, with Katayama Haruka as the President, and called for member submissions of their art. He has also "accidentally" leaked in a subsequent post that there will be an AKB48 Art Exhibition in June 2012.

More information was revealed on a post on Thursday. Yasusu is planning to rent a space in Tokyo, and ask experts in different fields of Art to come in and give lessons to the members. Eventually the artwork created by the members will be published in a monthly art magazine Bijutsu Techouu (美術手帖). Many members have submitted their creations and there are enough pieces for the time being.

Shukan AKB will be another interactive channel for the Art Club. He then said maybe the Art Club will be asked to design CD covers, concert posters, costumes and more. He is also considering calligraphy and photography.

On the 13th, Akanishi spoke from the Grammy’s concerning his marriage to Kuroki Meisa. ”I’ve extremely sorry for the trouble I’ve caused” he said, apologizing. “From now on I’ll do my best, so please keep supporting me.” Akanishi was also enthusiastic about his current work. ”I would like to continue coexisting in both Japan and America” he stated.

So far, Akanishi has always been Johnny Kitagawa’s receiver of affection, but at the announcement of his marriage, Kitagawa made the statement to several magazines concerning Akanishi’s penalty “I must consider something”, he said, and with this, the existence of the ‘Akanishi Troop’ has also began to rise to the surface.

Years ago, the members of Johnnys who were known to have began partying with Akanishi in the heart of Roppongi include Nishikido Ryo and Yamashita Tomohisa, and outside of that Shirota Yu.

The Akanishi Troop themselves are supposed to be a group with “blessing” but with the current marriage, it seems unmistakably at this rate the troop is headed towards a breakup.

With Johnny’s Jimusho being informed of Akanishi’s marriage through the newspapers, Yamashita and Nishikido were given the warning through the phone to “not get close to Akanishi anymore” and that the two would “suffer penalties” if the they were caught “going out together with Akanishi”.

Speaking of Yamashita, his drama “Saikou no Jinsei no Owarikata ~Ending Planner~” has garnered unexpected low ratings and whispers are flying of it being cut. In Nishikido’s corner, a lot is being expected from his activities with Kanjani8 and his life as a solo actor. The two have both had their fair share of scandals involving women, but it seems the Jimusho management sees Akanishi as the main source. Indeed, it seems that Yamashita and Ryo’s relationship with Akanishi might be broken off. Yet, even though the troop may be dissolved, it feels as though this will not better the current situation.

first post on arama! ^_^ i just joined arama a few days ago but i've been a lurker here for a looong time

I can't at how gorgeous she is in this and her body is amazing, the covers dear lord FIRE HIM/HER whoever made this