So cute<3
luv her voice, the song & PV and she is just soo cute and young!

As we know earlier , Mr.Children will release new single for the first time in 3 years and 7 months

Now ,they have revealed the cover of new single yet
【34th Single】
「Inori ~ Namida no Kidou / End of the day / pieces」 
Besides ,This is CM for their coming Dome tour POPSAURAUS 2012

Ah ,Can't wait for their stuffs and their concert ..so excited !! XD 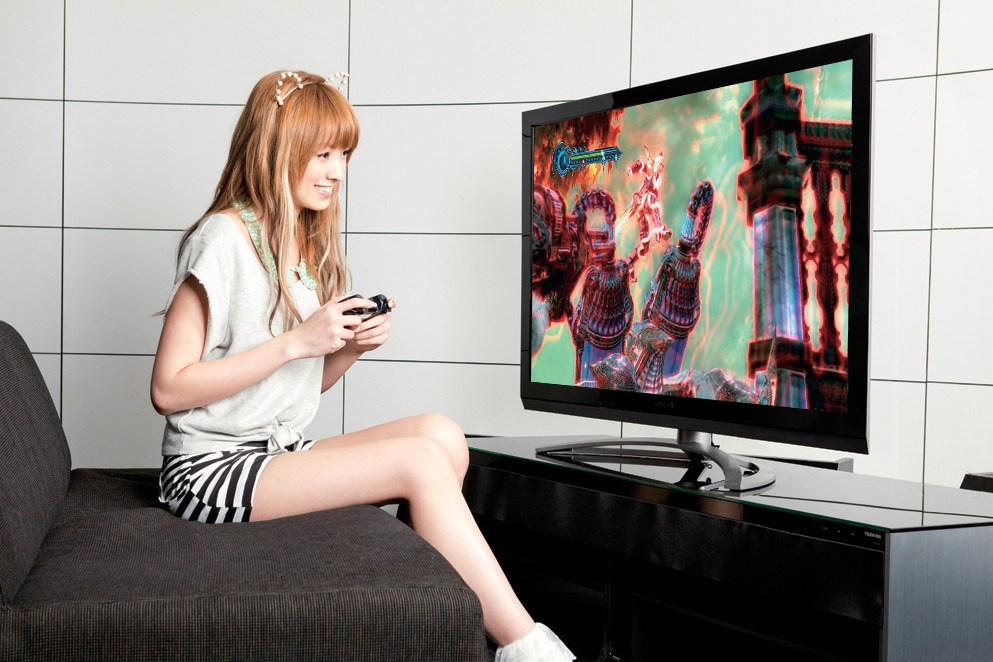 In a DengekiOnline interview focusing on Toshiba's Regza television set Akina, who is a notorious gamer, demonstrates its capabilities by playing the PS3 game "Blaze of Time".

To be released March 14
Cover(s)  & Tracklist


I luv the chorus!

Recently, Docking48, one of NMB48's variety shows from KTV, broadcasted a very interesting challenge they had to do under Challenge48.

Challenge48 is a segment in the variety every week where the NMB girls take turns to perform various challenges such as bowling, baseball, basketball, volleyball, roller coaster, haunted house and etc normally associated with the number 48.

For this week, they had a brand new challenge, and they were given 48 minutes to learn up the steps and the tricks as demonstrated by a pro group, B Tribe, while skipping/jumping rope. This steps involved some footwork, cartwheels, stunts and basically like a dance, but it is incorporated while skipping rope. If they failed to perform the challenge after the 48 minutes, they would have to do a forfeit.

Will these 3 girls be able to perform this difficult challenge?

Watch their attempt below!

Wowww this did look very tough!!
But really, BEST. CHALLENGE. EVER.
At least it is more interesting than the usual stuff yaknow ;)

On the special episode, Mr. Children will make their appearance which will be the first time in 3 years and 3 months since they last appeared on the show back in December 2008. It was also announced that Rihanna will make an appearance, and show her live performance on the show!

Check out the guest line-up below!

More details will be announced later.

Kinda random for Rihanna, when was the last time she was in Japan? Umbrella-era? And with the rice cake incident too?

Last month, we looked at the unique way in which Valentine’s Day is celebrated in Japan. Women give “giri” chocolates to their male friends and colleagues at work. “Giri” refers to obligation or duty. When Japanese people receive gifts, they feel they have to pay back the kindness or give something in return.

In the case of Valentine’s Day, that means guys have to return the favor on White Day, which falls on March 14.

Young women tend to prefer sweets as a return gift from men. In the past, they would be pleased to receive Godiva chocolates or some other high-end brand. However, recently, women appreciate handmade sweets as well. Media such as J-Cast and Nikkei Women have been reporting on the latest trend.

For guys who are proud of their sweets-making skills, there is a competition called “White Day Daisakusen: Ikeotoko eno michi” (White Day Strategy: The way of cool men). Find out more about the contest at http://www.choco-recipe.jp/milk/recommend/ikedan_cp/index.php

Both the 1st & 2nd CM's are interlinked with each other & this makes Nouna Survivor the 3rd song of BREAKERZ to be used to promote Cardfight!! Vanguard , the 1st 2 being CLIMBER x CLIMBER & GO respectively .

Trigger warning due to the topic of suicide.

The number of students who committed suicide last year in the country hit a record figure of 1,029, up 101 cases or 10.9 percent from the previous year, the National Police Agency said Friday.

It was the first time that the number exceeded 1,000 since the NPA started recording statistics in 1978.

Of the students, the number of university students who killed themselves rose by 16 to 529 from the previous year while the number of high school students who did so increased by 65 to 269, according to the NPA. The combined figures accounted for about 80 percent of the total number of students who committed suicide.

By age group, the number of people 19 or younger who committed suicide rose by 12.7 percent to 622 from the previous year, and the figure for those in their 20s increased by 2 percent to 3,302.

Of the students, 140 committed suicide due to academic underachievement and 136 did so due to worries about their future after leaving school, the NPA said.

By age, suicide victims in their 60s numbered 5,547 and formed the largest group among all age brackets, though the figure was down 6.1 percent from the previous year.

Among the reasons given for 22,581 people committing suicide, the largest portion, 14,621, or 65 percent, left indications that they had killed themselves due to health problems. The reasons were found in suicide notes or other evidence.

Those who committed suicide because of economic problems totaled 6,406, those who did so due to domestic problems numbered 4,547. School issues accounted for 429 cases, according to the NPA.

Meanwhile, 56 people killed themselves for reasons related to the Great East Japan Earthquake in the period from June 2011 through January this year, according to the Cabinet Office.

Regarding reasons for the disaster-related suicides, health issues and economic woes were cited as the main reasons for 16 victims respectively.

It's been one year since the great disaster in Japan last March 11. There's still a long ways to go in terms of recovery, and for a lot of people, life is still constantly a struggle. This is why it's still crucial that we show our support and continue to keep the affected people and areas in our hearts.

A friend of mine came up with the idea of changing the lyrics of I Love You & I Need You Fukushima (http://www.youtube.com/watch?v=3CQJuAN2BEY) to apply to all of the affected areas of Japan, and create a music video for it including people from all 50 states of America. We quickly got permission from the original band, and a student of acquaintance from the Tokyo College of Music began arranging our own version of the song almost instantly. Over the past two months, my friends and I have worked to contact people living in each of the 50 states, and from there, we taught everyone how to record the song and video, and they sent them in when they were done. Once all the parts were sent in, I mixed them and the video, and now...we have our project.

It's the anniversary now in Japan, and somehow our video is public on time. The only thing we're trying to accomplish with this project is expressing our support: showing people that support is still coming from all over the world, and that we haven't forgotten.

I think this kind of thing isn't done on Arama that often, but this is a great community full of people who really care about Japan, so I hope this post will go through and that y'all will check it out, and share it as much as you can, because we want to spread our support to as many people as possible!


(Mods, I'm sorry if this kind of thing isn't allowed, seeing as it's not really entertainment news, but I hope at least you guys will check out the video. And as for the tags, I had no idea what would be appropriate, so I picked the few I thought MIGHT POSSIBLY apply. Please let me know if I should change anything here... Thanks so much, guys!)

Nakayan was one of the 13,000 people who entered the 3rd Generation AKB48 audition in December 2006. She passed the audition and debuted with Team B on stage in April 2007. She was moved to Team A following the team shuffle in August 2009.

Since Nakayan entered AKB48 6 years ago, she did not rank within the Top 40 in any of the 3 Senbatsu Elections. In the autobiography she describes her feelings regarding the situation, and how she managed to eventually look at this and find it "amusing".

Even without being a Senbatsu member in AKB48, Nakayan has already distinguished herself through voice acting for an animated version of Moshidora, as well as Neptune MK2, a role-playing game on Playstation 3. She will also be a voice actor in AKB0048, an animation about AKB48 in future.

The book also describes the difficult life of an Idol behind the scenes, and how Nakayan was able to find a comfortable place for herself after overcoming the hardships. The central theme of the book is "Send a positive message for all the 'Non-Senbatsu' people in real life".

Too many amazing people on one stage, tbh. The DVD is going to be awesome.

this song is old, it just got a pv now because she is releasing a dvd set of all her pvs called Utau Inu 4 on March 21.
not sure why this one got a pv, fan choice or something? On March 9th, pop duo group MAY’S, who went hiatus last year due to vocalist Katagiri Maiko’s poor condition, held their comeback live ‘THE FACTORY presents MAY’S RETURN LIVE ‘39′”, which marked their first live since September of last year. At this event, Katagiri stated, “I’m happy I was able to come back as my energetic self,” and performed thirteen songs including their new song, “SKY”, at this live.

She stated, “Since it was my first time being away from the stage for so long, I felt a lot of stress,” and honestly explained her experience. Katagiri also revealed that in December last year, she had gone to London to take some language courses there. She felt that, “Rather than doing nothing in my free time, I thought it would be good to go out and experience for a little bit, and use that experience to connect with my music.” She added, “I want to show that I did not change despite my throat condition.”

This will be forever one of their most flawless songs.
first time hearing JUMP BAND's Midnight Train. falling in love w/ Takaki's voice. I just fear one day Yuto's gonna drop those drum sticks he's so fond of twirling.

They also performed their new song, Cheeky dreamer, in the event. Their goal right now is to major debut. Avex also announced another idol audition for Street Sei. This will be their 3rd generation.


Documentary of the group formation

Honestly ,i don't expect in this serie but Supporter Seiyu is  really interested !! ..Sawashiro Miyuki !!

As announced earlier, Fairies will be releasing their 3rd single titled “Beat Generation/No More Distance“, which will be another double A-side single on April 4th. Now, details on the upcoming single including the track lists and cover jackets have been revealed.

The single will be released in two different editions.  Check out the details on both editions below! 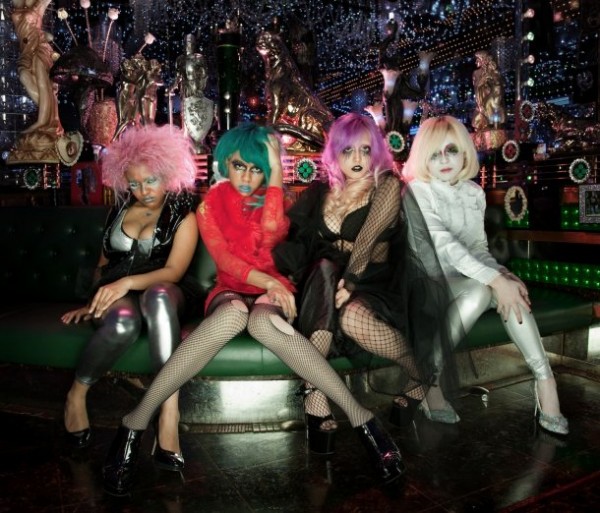 Mysterious rock band Ziyoou-Vachi has revealed the title and release date for their second album!

Ziyoou-Vachi’s new album will be titled “Hebihime-sama” It is scheduled for a May 23rd release. The theme of the album is ‘destruction’ and it will feature a total of 8 tracks.

The band is currently in the middle of their one-man tour, ‘Kujaku Fujin‘. They’ve already added one new date to their tour, on June 1st at SHIBUYA-AX, this new live will be called ‘Kamen no Utage Dainiya‘.

Here is one of their older songs:

The drummer and lead singer, Luli-chan and Avu-chan (17 and 19 respectively), are siblings of African-American and Japanese descent.