lol @ the awkwardness of it all. Aya looks so beautiful in motion tho <3

For those who don't know, Nice Girl Project! refers to a group of artists produced by Tsunku. At the moment, it consists of THE Possible and Tokki. Their releases are under TNX, Tsunku's record company.

THE Possible consists of Akiyama Yurika (19), Hashimoto Aina (19), Morozuka Kanami (22), Okada Robin Shouko (19), and Goto Yuki (18). All were former Hello!Project Eggs and graduated in 2007. This is their live single Kibou to Seishun no Hikari ~Come On! Pika! Pika!~

NGP/TNX has some of Tsunku's best singers, and in my opinion, most of his best songs go to them. Probably because releases are more sporadic and he has more freedom to what he wants musically. It's sad that he doesn't spend as much time on them. The members also show up on Tsuntube, Tsunku's TV show, fairly often. Most of them do gravure magazines and DVDs as well. Tokki is their most popular model, but I don't have anything of her to share right now.

On March 15th, AKB48’s Itano Tomomi appeared as a secret guest at BIC CAMERA’s Yurakucho shop for an event being held for the release of E Access’s high speed service, “EMOBILE LTE”.

Itano appeared wearing the same mini skirt she wore in the CM, “The service is very user-friendly, because it is fast you don’t have to wait”.

When asked how she felt about everyone seeing her CM on so many screens she commented, “It was uncomfortable, or perhaps I should say, it was quite embarrassing.” On March 14th, actress and former Morning Musume member, Ichii Sayaka, attended an interview regarding her film Asu ni Kakeru Ai. The film will open in Japan on the 31st, and starting in April it will also be released in 700 theaters throughout China in commemoration of the 40th anniversary of friendly relations between Japan and China.

Ichii plays the role of a fashion designer whose grandmother (Yachigusa Kaoru) was a Japanese World War II orphan left in China. Ichii’s character is also a single mother, something that strikes Ichii close to home as she was in the process of divorcing her husband when the filming began last May. Ichii is the mother of a seven year old girl and a five year old girl.

When asked about her private life, Ichii responded that she dances to AKB48’s hit songs with her eldest daughter and that her daughter said, “Mom, you look like Shinoda (Mariko)”. However, when asked if her daughter listened to Morning Musume she replied, “MoMusu? It seems like she knows who they are, but right now she likes AKB.”

The new Johnny's group Sexy Zone will soon be added as regular members to Fuji TV’s variety show “Sennyuu! Real Scope.” The show is undergoing a renewal this spring, when it will be renamed “Real Scope Z” and get a cast change.

This will be Sexy Zone’s first time as regulars on a variety show, not to mention their first in a coveted “golden time” (7pm-10pm) slot. The group debuted last November and currently consists of five members with an average age under 15 years old.

The new “Real Scope Z” will continue in the same Saturday 7:00pm time slot, starting on April 7. The show will still have Bibiru Aoki, Kamiji Yusuke, and Sekine Mari as regular cast members, but they are being joined by Sexy Zone, Yanagihara Kanako, and announcer Kato Ayako.

It has also been announced that Sexy Zone’s next single, “Lady Diamond,” will be the show’s theme song. The single will be released on April 11.

In separate announcements, it was revealed that Sexy Zone members Nakajima Kento and Kikuchi Fuma will appear in television dramas on Fuji TV this spring. Nakajima has been cast in the series “Mirai Nikki -ANOTHER:WORLD-” (starring Okada Masaki), while Kikuchi has been cast in “Kazoku no Uta” (starring Odagiri Joe).

It’s been revealed that talento Rola will be making her solo CD debut!

Rola made her debut as a singer in October of last year in ISSA × SoulJa’s single, “I Hate You“. Although she’s usually known for her silly personality, Rola gained a lot of attention as a artist through this song. The music video has even reached over 3 million views on YouTube.

Rola will sing the CM song for the cosmetics brand, “BRIGITTE“, and will also challenge herself to an English song by a foreign producer.

The release date, title, and other details on the single has not been revealed at this time, but it will be released from Universal Music International. Rola, who will become label mates with Lady Gaga and Madonna, commented, “I like singing, so I want to make it a cheerful pop song that will deliver my feelings. Right now, I love Madonna, Jessie James, and M.I.A.“.

yes, Japan's actor-->singer usually suck but their models--> singers are usually amazing
and her voice is actually good

You Guys Need To Know How Awesome MiChi Is .

When Japanese people are ordering food, how many times do you hear them asking for "oomori" (large size)? It's the equivalent of asking for "supersize" in a U.S. fast-food joint.

My guess is that it is only relatively recently, over the last 20 years or so, that oomori has even been a common option in restaurants and food outlets in this country — perhaps someone reading this can tell me when they first heard it.

E-Girls will be releasing their second single "One Two Three" on the 18th April, this time with two new performers Kizu Rena and Suda Anna. (More info here).
The single will come in two versions: CD+DVD and CD Only.

It has been announced on the 16th that Fukuhara Miho will debut as an actress in Fuji TV's new and upcoming drama "Kaeru no Oujo-sama", starring along with lead actress Amami Yuki! And Miho was recommended by none other but Amami Yuki-sama herself.
( Collapse )


There are some new members, including one familiar face!
( Collapse )

Of course, there are the other Kenshuusei as well.


( Collapse )
The setlist was also posted on the website. Songs only, though, not performers.

Which members are your favourites? Do you like any of the new four girls?

Also, are there any audition finalists who didn't make it that you'd like to see become a Kenshuusei? 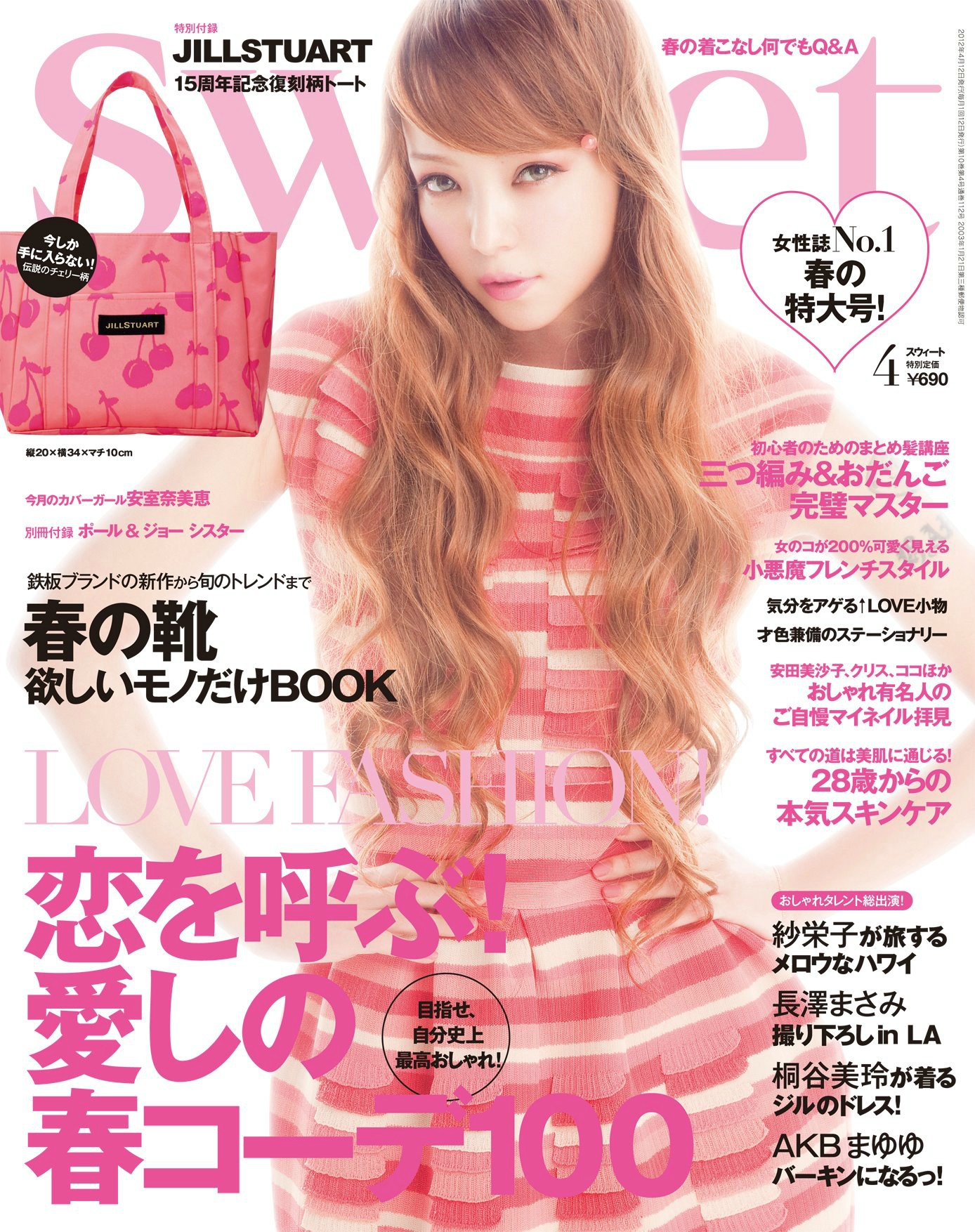 Happiness' 4th single, which was initially rumored for a 14/3 release, has been announced! The single will be released on 2012/05/16. It will come in two versions: CD+DVD and CD Only. A while ago it was reported that MIMU would be taking a hiatus from the group and as such will not be featured in the release. On another note, the b-side of the single, "I'm for you" is currently the theme song for 03GIRL (a cosmetics brand).

【DVD】
We Can Fly Music Video

I don't really follow Infinite, but this is one of the better remakes I've heard.

Chikipa are shown practicing songs, playing around, and viewing their poster in this video uploaded on the official iDOL Street Project youtube.

They're so precious, I can't handle it.

Tbh I didn't even know they would have a PV for this release. I just found it today by chance. I wonder why it wasn't posted anywhere. Maybe it's because it sucks? Ha... yeah, step up your game capsule. We want another JUMPER. But the visualizations are nice, I guess.

As most of you know Miho is doing a duet with Leona and the song is scheduled for a June release. Below is a picture of the two recording their duet in studio! imagine how awesome it will be, them great voices *__*

On March 15th, it was revealed that child actress Ashida Mana (7) is going to release her second single called “Zutto Zutto Tomodachi” in May.

Last year the adorable young actress made her singing debut together with fellow child actor Suzuki Fuku (7). Their single “Maru-Maru-Mori-Mori!” sold over 533,000 copies, and ranked eighth on the Oricon weekly charts. Moreover she became the youngest person ever to perform at NHK’s annual music show “Kouhaku Uta Gassen“.

Ashida’s solo debut with the single “Suteki na Nichiyobi ~Gyu Gyu good day!~” (fourth place on Oricon) in October of last year was a great success as well. Now, seven months later, she’s preparing her second single “Zutto Zutto Tomodachi”, which also will be used as the ending song for the upcoming TV anime ‘Jewelpet Kira Deco!‘ (first episode airs on April 7th) as well as the theme song for the upcoming anime movie “Jewelpet the Movie: Sweets Dance Princess” (opens on August 11th). The former will also use the single’s coupling song “Happy Lucky ☆ Go!” as its opening theme.

The ‘Jewelpet‘ series is very popular among girls of Ashida’s age. Moreover she, herself, is said to be a big fan of the series and was very happy when she received the offer to sing the theme song. The recording for the new songs took place recently, and the young actress was said to be brimming with energy. “It became such a nice and feel-good song,” she commented. “I hope that everyone will sing along with it. Please continue to look over me!”
“Zutto Zutto Tomodachi” will be hitting the store shelves on May 16th.
Source
Collapse