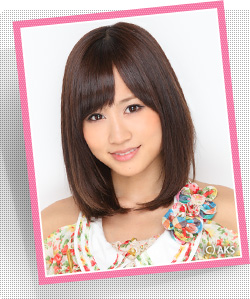 Maeda Atsuko, the face of AKB48, has announced her graduation tonight on the final day of AKB48's [Gyoumu Renraku. Tanomu zo, Katayama-buchou!] concert in Saitama Super Arena. No graduation date has been announced at this time.

I am a first-generation member and have been here since I was 14. This was my life. It was a big decision. And I will make a second important decision. I am going to graduate.

I have caused some troubles because of my mood swings, but thanks for everyone's help, I am here today. To perform in Tokyo Dome was a dream since I was 14.

Now this dream has come true, at 20 years of age, I have to work hard towards my next dream.

I have worked hard for the past 6-1/2 years. I have to move onto my next dream at the age of 20.  I am anxious and worried because I don't know what will happen. But for the kouhai, I have to take the first step towards this.  No details have been decided.

No graduation date has been announced, but it will most likely be at the end of the AKB48 Tokyo Dome Concert since she said it was her goal. The date for that has not been announced either. It was not mentioned if she will still take part in the AKB48 Senbatsu election this year, but she will still be part of the 26th single [Manatsu no Sounds good!]


I am just at a loss for words. I didn't expect Acchan to graduate yet. She's only 20, and still has a lot of future for her in AKB48. I was expecting one of the older members like Mariko to graduate first because of her age, but definitely not Acchan. I guess it is inevitable, graduation is part and parcel of idol groups. But AKB48 will be very different without Acchan. She might not be my oshi, but she is among the people I respect the most in my life.


Quoting a line from her solo single Flower

一番美しいFlower
(The most beautiful of all flowers)

Audio from the announement

In the Japanese dubbed version of the film, Tsuchiya will voice the character ‘Raikes’, who is originally played by singer Rihanna.

Tsuchiya, who claims she’s a fan of Rihanna, commented, “I used the voice I would use if I was acting, so it was easy to do.”

In the film, there are a handful of scenes that required Tsuchiya to let out a shout. “I’ve been training my muscles, so I thought I could do it,” she said confidently, and shared her training method saying, “I laughed so much that I gained a six pack. It’s good to laugh from the heart because you use your whole body.”

Tsuchiya showed interest in acting overseas, but shared that she doesn’t have the language ability to do so. ”It’s something I want to experience in my life. But I can’t speak English. Now if only there was a role where I could just let out screams…“, she joked.

“Battleship” will open in theaters in Japan on April 13th.

It’s been reported that Sexy Zone member Sato Shori will be participating in the “15th Annual Ford Island Bridge Run 10K“, which will be held in Hawaii on April 7th.

This was decided by Johnny’s Entertainment president Johnny Kitagawa after seeing Sato take first place in the marathon for Johnny’s Jr. baseball tournament earlier this month. The other members of Sexy Zone are expected to accompany Sato as the cheer group.

The “Ford Island Bridge Run” is one of the biggest 10K runs on the island of Oahu. Participants will race across the bridge to Ford Island in Pearl Harbor, where usually only military personnel are allowed. They can also enjoy the scenic and historic sights of Hawaii.

During this event, pop duo Yuzu sang their popular birthday song, “Okuru Shi“, for Ayase, who will be turning 27 years old on March 24th.

In tears, the actress expressed, “I think this will be a memory I will never forget.” She also showed aspiration for the new year saying, “I want to work in dramas and movies with more ambition. I also want to grow as a person.”

‘Mirai Souzou Project’ is a comprehensive insurance program by Nippon Life Insurance that took 6 years to develop. To commemorate its launch in April, its new CM series, ‘Mirai Souzou Monogatari’, will air starting March 24th. The company will also release a new product called ‘Mirai no Katachi’, and a new CM series to promote this product will broadcast starting the 26th.

Ayase will star in the ‘Koete Iku Chikara’ version of the ‘Mirai no Katachi’ series. In the CM, Ayase leaps over objects while Yuzu’s new song, “With you.“, plays in the background.

VAMPS announced the venues for their live tour this year. The tour is a country-wide series that begins in June and lasts through September. The band has scheduled to stop in 10 cities and has a total of 49 live performances for the tour. See the schedule below.

Karin, Mia, Reina and Ayami
Earlier this year, Avex revealed a new girl group of theirs, Prizmmy☆. They're cute, aren't they? I think so. Prizmmy☆ is a four member girl group, all of the members attends Avex Artist Academy and Avex Dance Master. They originally started out as a 3 member group, Prism Meitsu until the foruth member, Ayami was added in. Then their name was changed to Prizmmy☆.

The members of the group are Karin, Mia, Reina and Ayami. All members are currently in elementary school.

With Oguri Shun and Yamada Yu’s recent marriage, its supposed to be a happy occasion… but unfortunately some new rumors have arisen regarding Oguri’s cheating.

Oguri, known for his inability to keep away from women, was allegedly caught frantically hitting on a popular idol in the waiting period for his marriage.

The popular idol Oguri made advances on was Oshima Yuko (23) of AKB48.

Oguri, who apparently has the hots for Oshima, got his actor friend ‘T’, who has worked with Oshima before, to set up a get-together. Allegedly, Oguri was very insistent on his demand. Its said at the get-together, between both of them was a good atmosphere.

Yamada Yu is said to know about Oguri’s womanizing very well but has abandoned hope on the matter, but if it comes out he cheated with a national idol, things won’t go well…

It is unknown exactly what intent Oguri had with being set up with Oshima Yuko, although its possible… it was that kind of intention. It looks like the married Yamada Yu is in for some hardships.

ugh please stay away from the flawless kween yuko

Kim Jong-un, the newly appointed leader of North Korea following the death of Kim Jong-il, has created a special division within his regime to crack down on foreign media, including Japanese adult videos (AV), reports Shukan Jitsuwa (Mar. 15).

In an effort to prevent the circulation of undesirable foreign music, films, and publications within the country, Pyongyang created Unit 114 in January.

Kim Jong-un is reported to have said that the influx of South Korean pop culture, particularly television dramas, is not tolerable. “It is to such an extent that it is the source of corruption for the impure relations between of men and women,” the leader is quoted.

Not only do open markets in North Korea sell South Korean dramas on DVD, smuggled from China, they also peddle Japanese AV flicks and Hollywood films. 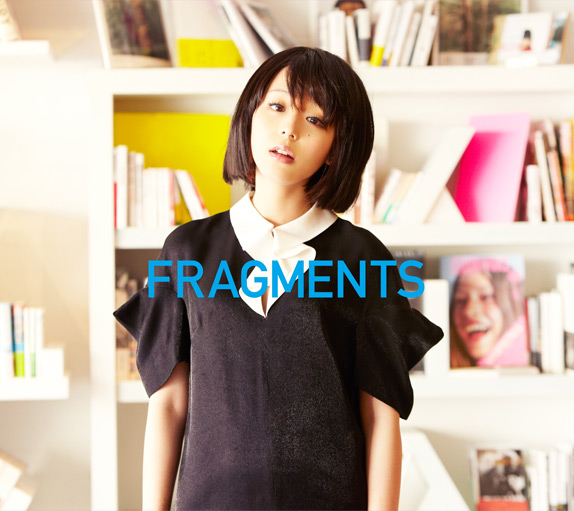 Voice actress Aya Hirano announced on Thursday that her new album, FRAGMENTS, will be released on May 23. The singer and voice actress appeared as a guest star at a music event at the Tokyo-Shibuya WOMB hall. FRAGMENTS will be her first musical endeavor in a year since the release of her album Aya Museum in 2011. She previously announced that she was working on a new CD last month.

It has been 14 years since Lenny Kravitz has had a solo performance in Japan. Starting in April Kravitz  will start his Japan tour “LENNY KRAVITZ – BLACK AND WHITE JAPAN TOUR 2012”.

Among those performances, MIYAVI was chosen to be the opening act for Kravtiz’s April 6th performance in Tokyo. The Lenny Kravitz and MIYAVI combination is expected to be great.

you can also listen to the full song, and the b-sides, SHUT UP, ONE and JET SETTER :D

being a popular and prolific feature artists, AK-69 is slated to be collaborating with BENI on her 16th single "But I Miss You/未定 feat.AK-69" dropping May 25.

the  b-sides are soooo much better than the A-side wow and so proud of BENI, her cover album is slaying ! 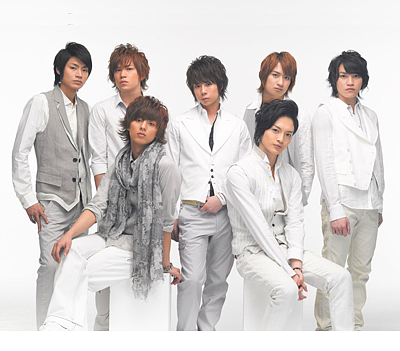 The song "SHE! HER! HER!," which is featured on their 3rd single of the same name, serves as the theme song to their new commercial for Watering KISSMINT by glico. The CM features the 7-member group dressed as gorgeous females and has become a hot topic.

The song features a "KISS" theme, and its fresh lyrics and catchy melody, which stays in your head, and it sprung to the top of Recochoku's chaku-uta charts on the day of release.

Preorders for the group's hotly anticipated first album, "Kis-My-1st," which will be released on Wednesday, March 28, has already been overwhelming Recochoku's online shopping site, "Recochoku shopping."

The ranking can be seen below:

omg! they're still #1 on Recochoku, proud of these perfect boys! 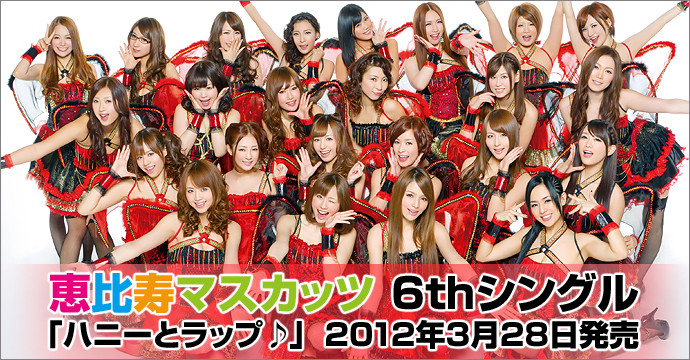 Ebisu Muscats recently were featured on Melodix to promote their new single, "Honey Trap♪"! They are seen wearing the single's outfits, and in this particular episode they are given objects that they must use in creative ways to seduce the MC with! Hallyu star Jang Keun-suk will release his first full-length Japanese album in two months, according to his agency YTree Media.

A press release from YTree announced on Friday that Jang, who recently unveiled his Team H’s mini-album, will reveal his studio record titled “Just Crazy” in three different editions on May 23.

“Just Crazy” is composed of 11 tracks including the title track “Crazy Crazy Crazy,” his Japanese debut single “Let Me Cry” and other songs including “Bye Bye Bye (album version),” “Rain” and “In My Dream,” which he performed during his arena tour last year.

The firm also released a teaser poster of Jang for the first time which will be included in his upcoming album.

Jang officially kicked off his singing career in Japan in May last year with the release of his single “Let me cry” which had topped Oricon’s chart upon its release. He has been recognized for his singing talent in Korea as well by singing soundtracks to his dramas.

They will release their 1st Japanese album on March 28.