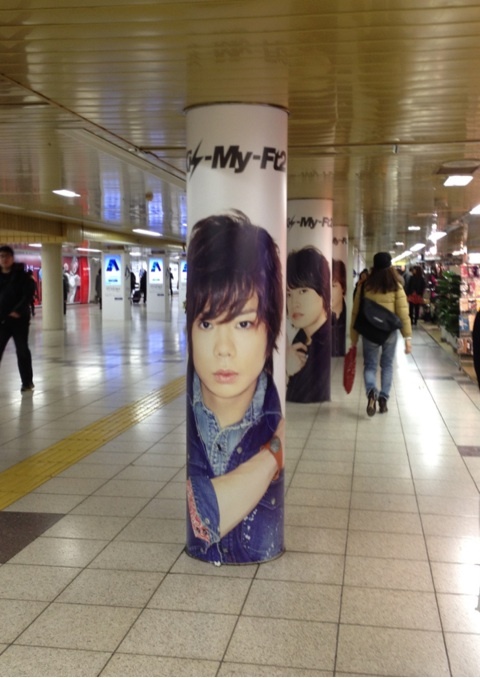 In conjunction with their recent releases, the images of members from Kis-My-Ft2 have been plastered across Japan from March 26. The images, which are the same design as those found in the "SHE! HER! HER!" first-press edition single, have been scattered across parts of Tokyo's Shibuya Station (JR and Tokyu Den-En-Toshi), Shinjuku Station (Tokyo Metro), and Osaka's Namba Station (Midousuji line).

With "SHE! HER! HER!," Kis-My-Ft2 has recently received the honor of having three consecutive #1 singles since their debut, which was last year. Their album was released on March 28, and all songs were released to Chaka-uta sites. Also, the announcement of their first TV show, "Hamakis" was made public. The show will feature a "variety school" concept and comedy duo Yoiko's Hamaguchi will serve as the teacher for the boys.

With their music, dramas and variety shows, Kisumai is gainging lots of attention.


clip from their concert


source 1, 2
honestly i was hoping it would be the one they performed at sc. oh well whatever keeps nyc away!!

Japanese Prime Minister Yoshihiko Noda stirred up a long-simmering dispute between his country and Korea with comments Tuesday about a Korean statue in honor of the so-called comfort women forced into sexual slavery during World War II.

The Sankei Shimbun on Tuesday reported that Noda at a session of the Diet told lawmakers that wording on the statue saying "comfort woman forced into sexual slavery" is "far from accurate." His comment came in response to a question by lawmaker Eriko Yamatani from the conservative Liberal Democratic Party.

The statue was set up in front of the Japanese Embassy in Seoul, and the legend reads, "This peace monument reflects people's genuine desire to learn from history and remember the past on the occasion of the 1,000th weekly protest against Japan's atrocities by comfort woman forced into sexual slavery."

Noda also stressed that he asked President Lee Myung-bak during a bilateral summit in December to remove the statue.

The Korean government and civic groups here want Japan to offer a sincere apology and compensation for forcing women into sexual slavery for its troops during the occupation of Korea from 1910 to 1945. But the Japanese government maintains that the women were not forced into sexual slavery but volunteered to make money, and that all compensation was settled under a 1965 treaty that normalized relations between the two countries.

A Kanon/Meimi duet? Interesting. Also can't wait to see if they actually dance in those heels and if Kana can keep up. Those are insane. Outfits are qt, though. And Kanon has gotten so beautiful lately, omg.

Recently, Shinoda Mariko held a presscon for her CM for Covert Affairs. During the question section, a reporter decided to ask her about Maeda Atsuko who announced her graduation recently. And Maritroll shocked the reporter with some of her responses.

Interviewer: Did Maeda-san confide in you about her graduation?

Shinoda: You thought it would be me didn’t you?

Shinoda: Looking at it terms of age and whatnot, you would think I would be the one to graduate first among all the members, but as long as I can move and have fans I’ll be here. But hearing Acchan’s graduation…she had been talking to me about it for a long time, and at that time I kept on saying ‘Don’t leave. Let’s keep doing this forever’ But this decision was something that Acchan came to herself, and even up until the last day I kept on saying ‘Don’t leave’, but in the end, the decision was hers. 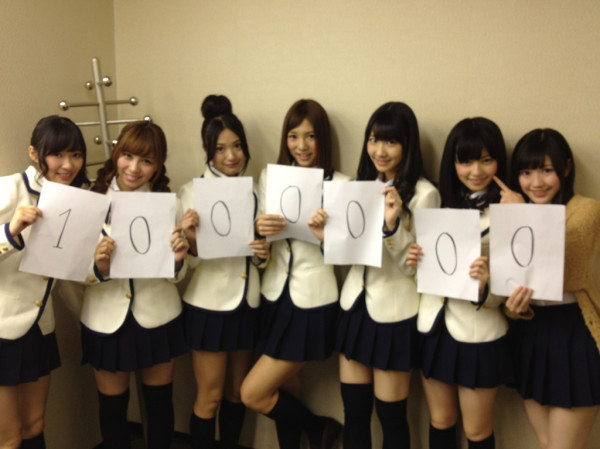 “Happy Song” will be used as the new opening theme song for “Mezamashi TV” starting April 2nd. At the moment, there are no details on when it will be released on CD.

In celebration of their 20th anniversary, Mr. Children has many exciting things in store this year for the fans.
They have already announced a new single, a live Blu-ray & DVD, 2 best-of albums, and a nationwide tour.

and latest news! ,They will broadcast their live concert on  May 10,2012 at Osaka Kyocera Dome to WOWOW ! too


Slow albums week? And boring singles week, with the exception of B'z, who's gonna rock and dominate yet again. And what a week for TEENTOP to release an album, but we'll see...

Dan Mazeau trying to avoid what happened to live-action Dragonball

Wrath of the Titans screenwriter Dan Mazeau discussed his upcoming projects, including the live-action adaptation of Tite Kubo's manga Bleach. Mazeau explained that both getting the rights and the scriptwriting itself were a long process for Bleach: "But early on we set down withTite Kubo the creator and the publisher of the series, and we had a long meeting, making sure we're respectful to the property. Nobody wants to, well… Let's just say that if you enjoyed [the live-action] Dragon Ball Z movie, that's great, but I thought it was a noble effort that ultimately didn't succeed. That's what we're trying to avoid. We want to make sure this movie lives up to what the manga is."

He added, "I'm currently working on Bleach and the idea is to set it in Japan and really be respectful to the source material. It's an amazing story. I've been shorthanding it as an 'action-adventure Sixth Sense,' but obviously on a bigger canvas than that. So I'm incredibly excited about that. It's a good one.”

Thanks to Daniel Zelter for the news tip.

somebody kill this abomination before it sees the light of day On March 30th, EXILE’s ATSUSHI released a cover of the nursery rhyme, “Furusato“.

ATSUSHI had originally planned to gift this song to a married couple friend he knew since his junior high school days as a baby gift. He explained, “It represents the excellence of Japan, it’s a song I want to deliver to the future generations.”

ATSUSHI first sang “Furusato” on ‘EXILE Tamashii’ back in January when guest Miwa Akihiro requested the song. Miwa praised ATSUSHI saying, “He’s a wonderful vocalist who can properly sing the heart of Japan.” His performance also attracted such a great response from fans that it was decided to be released.

“Furusato” will be used as the CM song for the hair care brand, ‘Ichikami’, which will star actress Nakatani Miki.

ATSUSHI expressed, “In Japan right now, there are people whose ‘furusato’ has been hurt from the earthquake and nuclear power stations. I think there are many people who are coming to cherish their ‘furusato’ once again. For people like them, I want to carefully continue singing from the bottom of my heart.”

“Furusato” is now available in both Chaku-Uta and Chaku-Uta Full forms.

Check out the song below!