you forgot or never heard of him, check out this post

he has a nice voice,kinda typical weird Jrocker vibe and he makes a pretty girl 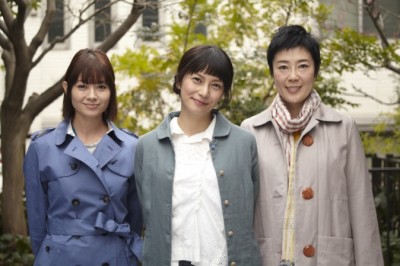 Gentosha publishes Masuda's four-panel manga Suu-chan, which follows the daily lives of women who deal with their anxieties regarding love and work. The josei (women's) manga series has sold over 280,000 copies.

After successfully finishing his Europe tour together with 砂月 (Satsuki) and with the final of his Vampire Requiem tour coming up next month, Kaya is already busy with a new release!

His new single is scheduled for release on June 20th and will be called SALOME. Further details are unknown as of now, but it’s already up for pre-order on HMV for 1,890 yen. Kaya will participate at the Tokyo Decadance DX special White at Christon Cafe on March 31st. Tickets to the event cost 4,000 yen. Attendants who follow the dress-code (white) will receive a 1,000 yen discount.

Furthermore, he will participate at D’s Mad Tea Party vol. 25 at Yokohama BLITZ on April 8th. Tickets are 4,200 yen and other participating artists include D, Versailles, Dolly and Lc5.

that long, drawn out whine you're hearing is gackt's toupee quivering in fear.

During the first program, which begins on Monday, Kawashima talks about her husband and how she uses cosplay to help him with his medical condition. Her husband, Toshihiko Yoroizuka, 46, is a famous patissier who suffers from obstruction of the central retinal vein, affecting his left eye.

Kawashima says she is relieved that he has cut back on drinking alcohol and is taking his medicine. “When he feels depressed, I cheer him up with cosplay,” she says.

She says she wore a sexy apron with headgear on Valentine’s Day and added that “cosplay treatment” makes him laugh.

Listen to it here on Fairies Unofficial Fansite

I love it!  It gives me the Exile vibes XDD

By now, Victoria Yoshimura expected to have a successful career in public relations or marketing for a multinational in London. Instead, she puts in 18-hour days, seven days a week as bo-mori, or spouse of the head priest, at historic Jodo Shinshu temple in Kyushu.

But, she says, there are quite a lot of similarities between the two careers. “I do a lot of event management here, I am always coming up with ideas on how to market the temple, our mausoleum—where we are selling lots, by the way—and giving speeches”, she said. 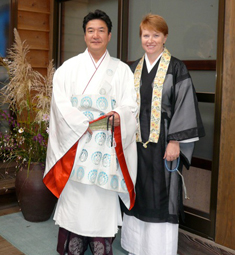 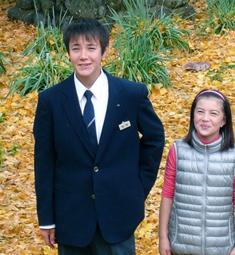 Victoria with her husband + her children

Add to that her language classes at nine schools in and around Takachiho-cho, funeral and memorial services, ensuring that the temple and family home are clean and maintained, and caring for their three children, and it is clear why she has to get up at 4:30am most mornings.

Posting this because I know arama likes reading posts about foreigners being successful in Japan. 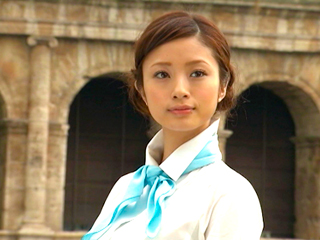 Softbank will release a new CM for the White Family series filmed in Rome. The CM is a parody of the film ‘Roman Holiday’, in which Ueto Aya imitates Audrey Hepburn, showing a princess-like smile in the CM.

Titled “Aya’s Holiday“, the CM has Ueto vacationing in Rome. All filming was located in Italy, and they reproduced famous scenes from “Roman Holiday”. The highlights in the CM are Aya’s neat and classic Anne princess style outfit, and the scene when Aya eats gelato at Spanish Steps and rides off with a guy on his scooter around sightseeing spots in Rome.

The filming was very large scale with Japanese and Italian crew as well as around 100 extras. They shot at 10 spots including Trevi Fountain and Bocca delle Verita.

Co-star Higuchi Kanako stated, “This is my second time visiting Italy, but it was my first time in Rome so I was looking forward to being there. Since filming was early in the morning, there were no other people and it seemed like we reserved those spots for us. It was a really luxurious time. I also tossed a coin into Trevi Fountain wishing to come again Rome. I took a picture with Aya-chan, and Oto-san, who also came with us on the plane, was very hyper [Laughs].”

I love duets and this is perfect

Everyone gets a line. I like the instrumental a lot, but the actual chorus/verses are kind of falling flat for me. It'll probably a good live song, though.

Based off the horror anime/novel Another comes a live-action version of the film, directed by Takeshi Furusawa and based on the novel by Yukito Ayatsuji. 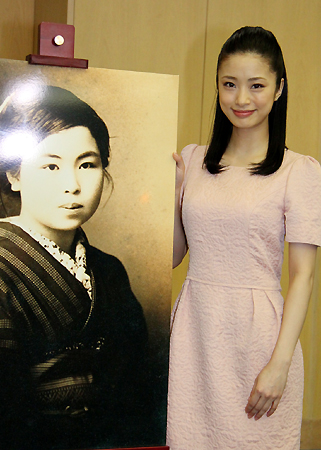 TBS announced on March 29 that it will be producing a special drama based on the life of poet Misuzu Kaneko in which actress Aya Ueto (26) will portray the late poet.

Born in 1903, Kaneko, who experienced a resurgence of fame in the aftermath of the 2011 Tohoku earthquake and tsunami through the use of her poem "Kodama Desho" in an AC Japan PSA, began writing poetry at a young age and published 512 poems before passing away at the age of 26 in 1930.

Commenting on the public's fascination with Kaneko's poetry, Ueto stated, "Her (Kaneko) verses were heard on television often after the disaster." "She was a very gentle and ladylike soul who you could tell had witnessed the sadness of life", she continued. Ueto added that she wants to make the role, which will call on her to deal with the subjects of death, illness, unemployment and other hardships, her best work yet by saying, "I will do my best to not have any regrets."

The drama will be produced by "Wataru Seken wa Oni Bakari" producer Fukuko Ishii, who also produced the 2001 Misuzu Kaneko biopic starring Takako Matsu. "There are still stories to be told. I want to step into that world one more time. I had my heart set on Ueto for the role and we waited until her schedule opened up to get the ball rolling" explained Ishii.

Cast in the role of Kaneko's brother Masasuke Ueyama is one-half of the Tackey & Tsubasa duo, Tsubasa Imai (30). "I'm thrilled to be a part of this wonderful project. I will do my best and I hope that this role will help me grow as an actor" commented Imai. This is the first time Ueto and Imai will be starring opposite each other. Upon hearing that it takes Ueto a week to learn her lines, Imai brought some laughter to the press conference by confessing he needs "at least a month".

The drama is tentatively scheduled to air in September.

The Sankei Sports newspaper reports that Dream Morning Musume member Nakazawa Yuko (38) is getting married. According to the newspaper, she will register her marriage today (April 1) and then hold her wedding ceremony this June.
Last December, the newspaper reported a rumor that Nakazawa would be getting married this spring, but nothing was officially confirmed at the time.
Nakazawa has been dating the president of an IT company since around August of last year, after being introduced to each other by a friend. The man, who is said to be around the same age as Nakazawa, is based in Fukuoka but spends about half of the year in Tokyo for work. The two apparently are already living together, at least for the time while he is in Tokyo.
Nakazawa was once the leader of Morning Musume and is currently the leader of Dream Morning Musume. According to the Sankei Sports’ previous report, Nakazawa plans to move to Fukuoka, which may make it difficult for her to continue as the group’s leader. However, it is said that she plans to continue working in show business.

The marriage was pretty much confirmed by herself on radio. Pretty sure she also mentioned that she would cut back on her activities. But either way, I'm so happy for her!

Ex-KAT-TUN member Akanishi Jin (27), who recently married Kuroki Meisa (23) without informing his agency prior, announced March 31st that he has officially resigned from Johnny’s Jimusho.

Akanishi said in an issued statement, “My time with the agency has been an amazing experience and I have learned many important things, but I am now ready to proceed on my own. For me and my family’s sake, I will continue to do my best. Please continue to support me in my future activities.”

The Jimusho has also released a statement, “We are sad to see one of our precious talents leave, and we wish him the best in his future projects.”

It is not clear how this event will coincide with Akanishi’s punishment issued by the Jimusho only days earlier, in which Akanishi’s Japan Tour was cancelled and was ordered to pay the cost of the cancellation fees.

The album will contains 14 previously released singles like, "Gazen Yeah!", "Torokechou dandy", "Evo Revolution", 2 new songs and a bonus track for a total of 17 tracks.

TBS just released new 30 seconds CM for Kanjani8's Nishikido Ryo upcoming drama "Papa Wa Idol". In the said comedy-drama that will start on April 19th, Nishikido Ryo will play as himself who got married to a single mother with three kids. Playing the role of his wife will be Yuka, while his kids will be played by Umika Kawashima, Yuki Imai, and Kanon Tani.

The 30 seconds CM also featured other members of Kanjani8 who will also play as themselves. Moreover, Arashi's Sho Sakurai and Satoshi Ohno will also guest in this new drama as themselves as well.

I'm not sure yet if I'll watch this or not. Am I the only one who thinks it's slightly odd for actors to act as themselves??
Collapse