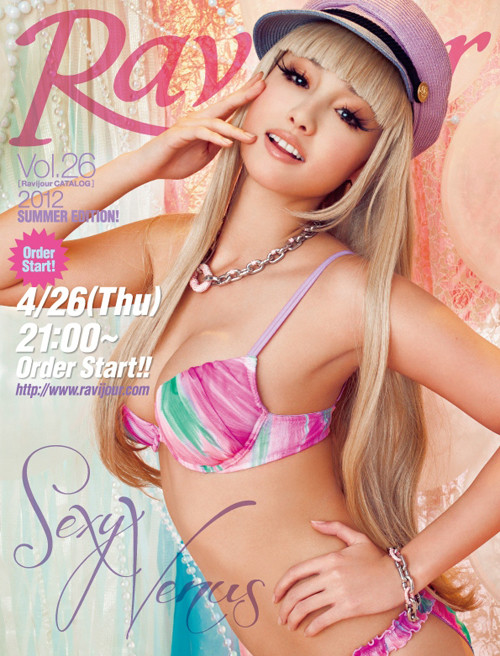 after a brief hiatus after hitting record low album sales, Thelma is back with a new single with SPICY CHOCOLATE and Ryo the Skywalker, her new single 君に会えるから... drops May 16.


I love her voice,her career trajectory  is so sad, but hopefully this becomes another hot digital single she needs so badly

NMB48, the youngest sub-unit of AKB48, have managed to rank first in Oricon music first week sales for three consecutive times since their record debut. However, NMB48's quest for four consecutive number 1 single might be put on hold with Johnny's Entertainment Arashi announcing the release of their "Face Down" single on May 9th.

The girls of NMB48 have topped Oricon weekly ranking for their past three singles- "Zetsumetsu Kurokami Shōjo", "Oh My God!", and Junjou U-19". Those singles sold more than 200,000 for the first week. But the girls will soon face their biggest hurdle with popular boy group- Arashi. Arashi's "Wild at Heart" managed to snag the top spot with more than 550,000 sales for their first week.

However, rumors have surfaced that NMB48's 4th single "Nagiichi" will contain ballots for the upcoming Senbatsu election on June 6th. If it were true, then this battle for the top spot might be not one sided at all.

NMB48's "Nagiichi" and Arashi's "Face Down" will both be released on May 9th.

Who do you think will reign supreme on May 9th?

When Tomohisa Yamashita forgot his glasses at a bar, it turned the place into a tourist attraction, reports Shukan Josei.

It has been reported the members-only bar in Ebisu, Tokyo, is a favourite of many Japanese celebrities.

“Yamapi is a regular there, apparently he comes by at least once a week. (Comedian) Lasar Ishii is one of the bar’s owners. Yamapi comes here a lot with his friends. Not just other celebrities, but also his own friends,” said one source.

It has been reported Yamapi had forgotten his glasses at the bar after a night out with friends.

“One night around mid-March, at about 10pm, he came here with his ‘Texas project’ team. Everyone was drinking a lot, especially Yamapi who had at least 10 shots, but it did nothing to him. He was asking whether the bar had anything stronger,” said one customer.

Apparently the glasses have not been picked up by the talent yet, and have now been placed on the bar’s mannequin.

Kanjani8 will star in their first movie ‘Eight Ranger’, a Sentai parody corner performed at their concerts.

The movie is scheduled to hit the theater on July 28th, and their trailer was released on April 4th. In the trailer, 7 costumed members make up “Eight Ranger”. The theme song by Kanjani8 is titled, “ER” (Eight Ranger).

Check out trailer of “Eight Ranger” below! There was nothing to disappoint Hideaki Takizawa and Tsubasa Imai fans at the duo’s event in Yokohama on April 1, reports News 24.

The “Tackey & Tsubasa 10th Anniversary Special Event” was held in Yokohama Arena, where 15,000 fans had gotten invited after winning a lottery open to those who had bought the duo’s latest concert DVD. It has been reported as the fans had walked into the arena, Tackey & Tsubasa welcomed them by holding a talk show in a specially-set-up booth.

The event included a Q&A session and games, giving fans a chance to interact with both talents, and in turn a chance for the duo to talk to their fans.

“Yokohama Arena was the first stage we performed at, and it was the place we held our debut press conference. It’s great to be able to hold our event here, it’ll be another special memory,” Takizawa said.

“There must be people here who have supported us since our junior years, before our debut. It’s amazing, I’m so grateful,” Imai said.

It has been reported on stage the two performed six of their hit songs including “Ai wa Takaramono”, and a few old songs from their Johnny’s Junior years.

“I’d never thought I’d be singing songs I performed when I was a teenager now when I’m 30,” Imai said. 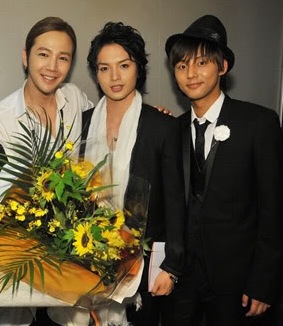 On the April 4, 7-member Japanese idol group Kis-My-Ft2 (기스마이훗토쓰) released their debut album, "Kis-My-1st" in Korea. Originally released on the 28th in Japan, the album jumped to the top of the Oricon charts the moment it was released, securing the #1 spot.

The album features 21 songs, including the smash chart toppers, "SHE! HER! HER!" and "Everybody Go!" as well as their #1 song "We Never Give Up!"

nowhere and no one is safe from the sexiness of KISUMAI

On April 1st, Ayako Hara was crowned Miss Universe 2012. During mid-March, the final week photos was released. Each contestant has a pair of pictures. The left picture is the photoshopped/final version, but the right picture is pre-edited/first version. As well, there are two cms for medical leggings for beautiful legs. While A.B.C-Z will go down in history as the first Johnny’s group to make a DVD debut, they are now struggling to keep sales up, reports Cyzowoman.

A.B.C-Z’s DVD “Za ABC ~5 stars~” made its debut on the DVD charts at No.1 in February and their debut event had attracted more than 15,000 fans in Tokyo.  A bright start, but a Cyzowoman source paints a not-so-bright journey of the group’s activity since.  Even though the group had started at the top, the DVD has only sold about 56,000 copies so far.

“They’re going around Osaka, Sendai, Nagoya, Hiroshima, Fukuoka, Sapporo right now.  Following on from the Osaka leg, it had been decided to squeeze in a hand-shaking event at every other venue.  Of course admission isn’t free, only the people who buy a copy of the DVD at the venue get to take part.  You get a free A.B.C-Z hand towel as well, but it looks more like a desperate act to boost sales.

“Of course, choosing a DVD debut was probably favoured over a CD debut.  Right now the group does not have what it takes to compete against other artists.  But even so, these sale numbers are disappointing…  After the Osaka event, sales did go up a little, but I doubt they’ll go over the 100,000 mark.  If they were to make a CD debut, I think they would be the worst-selling Johnny’s group to date,” said one source.

It has been reported a number of Johnny’s fans like to buy the debut single of groups other than the one they support, a kind of way to say congratulations.  In this sense A.B.C-Z should have a large number of supporters since they have been back dancers for a number of Johnny’s groups.  But if the sales to date include the copies bought by these supporters, what is going to happen next?  But most importantly, asking fans to buy several copies of a product might not be the best way to open up a future for A.B.C-Z.

The solo versions are each girl singing the entire song herself, not just the usual closeup with her only singing her own parts.

On April 4th, vocalist Ochi Shiho’s solo project Superfly was streamed in a live broadcast via UStream and Nico Nico Douga, where she announced she will be releasing her new album, ‘Force’, on September 19th.

Rock group THE BACK HORN has announced that they will be releasing their 9th album, “Liv Squall“, on June 6th!

This will be the group’s first album in a year and 9 months with their last being, “Asylum” back in September of 2010. Aside from their charity song, “Sekaiju ni Hanataba wo“, and their latest single, “Sirius“, the album will contain 11 brand new songs written by the members themselves.

Check out the jacket cover and track list below!

J-Pop superstar May’n will be making her return to the U.S. for two live performances in California this June.

As part of the ‘ROCK YOUR BEATS World Tour’, May’n will perform live with her band and dancers in Los Angeles and San Francisco. The event will also be followed by a special autograph session for VIP ticket holders.

After being discovered through HoriPro’s Talent Scout Caravan and becoming known to anime fans all over the world as the voice of ‘Macross Frontier’s Sheryl Nome, she released her album ‘HEAT’, which debuted in the Top 10 on the Oricon.

Check out the ROCK YOUR BEATS tour dates in California below!

On April 6th, female rock band STEREOPONY will be holding a live concert at the anime festival, “Sakura-Con“, in Seattle, Washington. It’s been revealed that this concert will be broadcasted live via niconico.com and Nico Nico Namahousou!

After their appearance at “Sakura-Con”, the girls are scheduled to hold their first U.S. tour. Upon completion of their U.S. tour and their return to Japan, they will hold their tour, “More! More!! More!!!“, which will wrap up on April 22nd at Shibuya CLUB QUATTRO.

Additionally, it’s been revealed that STEREOPONY’s new song, “stand by me“, will be released as a single on May 30th. This song is the ending theme to the anime, “Eureka Seven: AO“, and will come in 3 different versions: Limited Edition (CD+DVD), Regular Edition (CD-Only), and an Anime Edition.

Check out the details on the live broadcast below!

It was announced that Oshima Yuko is dubbing the role of Merida in Merida to Osoroshi no Mori, also known as Brave, a Disney and Pixar 3D computer-animated fantasy adventure film.

Merida, who loves freedom and is always inquisitive, grew and realized her position as a princess. Yuko was picked to dub this role as she is deemed to fit the character perfectly, Yuko said, "I will work my hardest to get into the role of Merida, and I hope to be able to cheer up the audiences watching and give them courage. I hope they look forward to this film."

When ask about her favourite characters in Disney/Pixar films, Yuko, who is a huge fan of their works, said, "There are just too many to be named. My favourite is Toy Story 3, I'd cry every time I watch it."

Merida to Osoroshi no Mori will be in cinemas in Japan starting from 21 July 2012. Actor and singer Ken Tanaka held an event in Tokyo on April 5th to commemorate his 40th anniversary in show business and to also announce his first record in 29 years.

During his time, Ken Tanaka been a singer and actor and is probably best known to us all for his role in Nemuri Kyoshiro. Ken Tanaka is also an actor that Gackt looks up to.
( Collapse )

The Foreign Ministry said a bilateral civil nuclear cooperation accord with Russia will take effect May 3, providing all necessary procedures have been completed.

The pact will pave the way for domestic companies to export nuclear technologies to Russia and help Japan secure uranium enrichment services from the energy-rich country.

don't know how to tag it

“When you look at high school students, you can see that the girls are more mature than the boys. I think I figured out why after reading some shojo mangas. Girls are able to imagine what love is really like, but next to them are a bunch of boys reading ‘Dragonball’ mangas. Of course there’s going to be a difference (laughs).”