One day Barbie Lips was performing and a young fan twice crashed the live by running on stage during the same song .On the second time of the run in, the group decided to have some fun and let the out of control young fan take center position in the song.

Kyarypamyupamyu will include a new version of "PONPONPON" in her new album coming up this May titled "BOMB BOMB BOMB", and will feature none other than Perfume! Check the PV preview below!

Haaa, just kidding! April Fool's! Yes yes, April Fool's was over like a week ago. But like, hear me out. Electronic band The Aprils, released this parody of Kyarypamyupamyu on April Fool's Day! They're known to do this almost every year, they've also done other parodies with the likes of Perfume and capsule. So this year, they decided to parody Nakata Yasutaka's new act, Kyary! The reason why I posted now it's because I was waiting to post this on April Fool's Day, but when April Fool's Day was over in Japan, The Aprils made this video private. So it was too late. But not anymore, so yeah, better late than never. If you're interested in their previous parodies, click here. HAPPY EASTER GUISE!

Back in the beginning of March, we reported on the site raphael.jp, which held a mysterious countdown. The countdown ran out today and many fans’ suspicions were confirmed: after 12 years, Raphael is holding two-day revival lives this autumn!

The band made their major debut in 1999 and had a special live at Budoukan in March of 2000. However, to great sadness, guitarist 華月 (Kazuki) passed away in October of the same year. Raphael went on hiatus in January of 2001. April 7th is Kazuki’s birthday, making the date of this announcement all the more special for fans of the band. The words Kazuki 13th memorial are placed next to the band’s name on the site’s header.

The lives will be held on October 31st and November 1st at Zepp Tokyo. First floor standing tickets are 6,000 yen, while second floor reserved seats are 6,500 yen. Tickets can be pre-ordered through Raphael’s site from April 9th to April 22nd.
( Collapse )
Source: 1 2 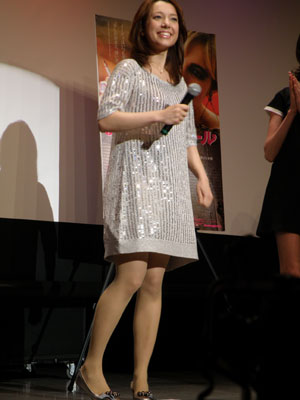 On April 3, Nippon TV’s announcer Hayama Hélène (29) announced her April 1st marriage. Hayama, the host of NTV’s ‘Sukkiri’ program (Monday – Friday from 8AM), made the announcement during the live broadcast of the April 3 show.

The beautiful half-Japanese Hayama’s sudden announcement of her marriage during the morning tea portion was both refreshing and surprising. She announced with a face full of joy that, “For April Fools, I completed my marriage registration. I am no longer a Hayama.”

Earlier this year Buono! had a concert in Paris,France, in the mythical Moulin Rouge, they also released an special Best album called "Buono Paris Collection" that could be bought outside the venue, here is the entire presentation: