Arashi is chosen as the main personalities for NTV’s annual fundraising telethon, 24Hr TV. At the same time, the members are also busy in other projects like movies and dramas.

Amidst all of this, it seems their management agency is also keeping a very close watch on their talents…

“Matsumoto Jun is good friends with Oguri Shun, who is known for being a playboy. Because of this, the agency have told him to stop interacting with his good friend. Ninomiya Kazunari is also banned from going to drinking parties with his comedian friends. Ohno was told to be more careful after tabloids found out he was dating AV actresses.”

However, that doesn’t stop the men from selling close to 10 billion yen in merchandises this year. This is why J&A is even more severe towards them. Even though they gave them smart phones as presents, it seems that the agency also uses those smart phones to track their every move using a GPS app. This way, they know where the 5 guys are 24/7. And it seems that the guys know nothing about such a tactic. With such a popular group, tabloids are keeping close tabs on the guys to see if they’ll slip up, but J&A might’ve gone too far with the GPS tracking.


In my opinion this is just insane!! o.o Please stop this Johnny, this are human beings and not dogs or something :(

It has been revealed that the theme song for Aiba Masaki’s new drama ‘Mikeneko Holmes no Suiri’(NTV) will be Arashi’s new song “Your Eyes“.

After Ohno Satoshi’s Fuji TV drama “Kagi no Kakatta Heya” announced that their theme song would be Arashi’s new single “Face Down“, fans were left wondering what would be the theme song for Aiba Masaki’s new drama and were pleased to know it would Arashi’s new song. The release date or any other information of “Your Eyes” has not been decided yet.

This drama is adapted from the popular mystery novel series ‘Mikeneko Holmes’ by Akagawa Jiro.
The story features a detective, Katayama Yoshitaro(Aiba) with a lot of weak points, solve mysteries with Mikeneko (a cat with fur of different colors).

As co-stars, Ohkura Tadayoshi from Kanjani8, Fujiki Naohito, Omasa Aya, Matsuko Deluxe and Omi Toshinori will appear in the drama.

Check out the preview of “Your Eyes” below playing in the background after the 1:07 mark.

our boys is very active ne....

Nintendo have released the debut trailer for Pokémon Black and White 2, featuring gameplay footage and a few of the new characters.

Time to save my money! 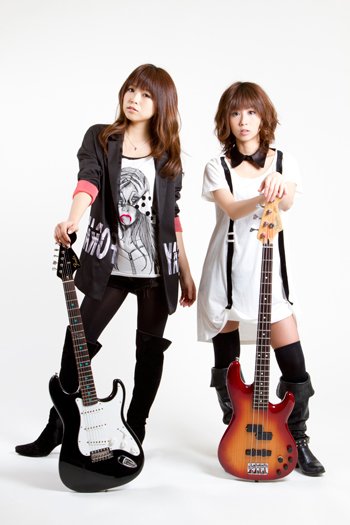 Girl band ZONE has announced that they will be releasing their new single, “treasure of the heart ~Kimi to Boku no Kiseki~“, on June 6th!

ZONE reunited in August of last year, which marked the 10th year anniversary since releasing their single, “secret base ~Kimi ga Kureta Mono~“. Since then, the group announced that they would be continuing their activities in 2012. After member TOMOKA (Vo, G) left the entertainment industry last November, ZONE has been active as a 2-member band with MIYU (Vo, G) and MAIKO (Vo, B).

“treasure of the heart ~Kimi to Boku no Kiseki~” will be ZONE’s first single in 7 years. It will be featured in HBC’s (Hokkaido Broadcasting) ‘Keppare! Gohan‘ starting April 25th. The members are also scheduled to make an appearance on the show.

As its coupling track, the single will contain “Yume no Kanata“, which will be the theme song to the golf tour, Sun Chlorella Classic 2012 , from July 26th to the 29th on TBS.

A portion of the proceeds from this single will be donated to disaster-stricken areas to aid in recovery from the Tohoku Earthquake.

In addition to their new single, ZONE has revealed that they will be holding a live tour called ‘Futari ni Narimashita Kedo… NANIKA?’ in June. For this tour, the girls will travel to Hokkaido, Miyagi, Tokyo, Osaka, and Aichi.

Actress Kuroki Meisa (23) was rumored to be pregnant when she married singer Akanishi Jin (27) back in February. On April 14th, she sent a fax to several media outlets, officially confirming that she is currently 4-months pregnant!

Kuroki started the message with a brief apology, “After I had pregnancy symptoms, I suffered from poor health frequently. It was my first time experiencing this, and it was a time of uneasiness.” She explained that after getting advice from the doctor, she waited to announce the pregnancy until she was in her stable period.

Kuroki continued, “Right now, I’m both mentally and physically stable. I’m happy and I’m filled with a sense of responsibility for this new life that I’ve been blessed with.” While she is due in mid-October, the actress expressed her joy of becoming a mother saying, ”We want to combine our powers as husband and wife, and pour all our love into this child.”

According to her agency, Kuroki is scheduled to star in the play, ‘Miyazawa Kenji ga Tsutaeru Koto‘, on May 12th and 13th at Setagaya Public Theater. Thereafter, she will go on maternity leave. Kuroki plans to return to work after childbirth, while carefully considering her condition.


CONGRATS AND BEAUTIFUL BABY FOR BOTH OF THEM.

When entertainers speak, the world listens, and one message they’re delivering lately is profoundly disturbing to at least one leading obstetrician – namely, that giving birth relatively late in life is okay. It’s not, Kyoto Medical University professor and infertility expert Nobuhiko Suganuma writes in Shukan Bunshun (April 12). Suganuma has a message of his own: “If you want children, have your first before you turn 30.”

The influence of celebrities on matters remote from their talents is a remarkable fact of life. When Mariko Shinoda of the girl band AKB48 mused in January about getting married around 40 or 50, Suganuma took notice – he could easily imagine young women listening starry-eyed and thinking, “Me too.”

Suganuma has been treating women for infertility since the dawn of the artificial insemination era more than 30 years ago. His own patients over the years number some 5,000. He has seen the numbers soar nationwide during those decades – and no wonder, he says. Ovaries, wombs and hormones, in his view, are in prime condition before 30. A first childbirth then can prolong the reproductive peak, but starting after 30 “entails risks” – of Down’s Syndrome or other diseases in the child at worst, of miscarriage, or simply of infertility. “There are no firm statistics,” he writes, “but the rising number of women marrying late and then being unable to conceive is an undeniable fact.” Moreover, “the success rate of infertility treatment starts dropping at age 30 and plunges past 35.” Visual Kei band SID has unveiled their PV for Nokoriga which will be released on May 2. They will also be releasing another single, S, the week following Nokoriga's release on May 9.

“Nokoriga” is the April theme song for NTV program ‘Sukkiri!‘, and “S” is theme song for the upcoming horror movie, ‘Sadako 3D‘.
Both songs were performed at their "emergency" live concert at Zepp Tokyo on March 16th, exciting the crowd of 2,700 fans. Sadako also made an appearance during the live, startling the fans who were present.

The warning signs were there, but a number of people, including those with mental disabilities, still died in isolation at their homes in the Tokyo area.

Authorities are trying to prevent these “solitary deaths,” but their efforts have been hampered by a lack of communication and confusion over responsibilities.

In some cases, officials are simply unaware that people are in need of help.

“Many do not want to tell about the family members with disabilities,” a Yokohama city worker said.

In one recent case, the bodies of a 77-year-old woman and her 44-year-old son, who had polio and a severe intellectual disorder, were found in a residence in Yokohama’s Asahi Ward, Kanagawa Prefecture, in December.

Police said the mother had refused support from others.

However, she seemed to have been signaling that she desperately needed help at home.

(For lack of a relevant photo)

So I decided to do a compilation of some of the foreign born celebrities in the Japanese entertainment business. I know for sure that I didn't get everyone, so feel free to add in anyone you know. On what grounds did I make this list? Well the celebrity just had to be born in a foreign country and have a career in Japan. That's why people like Hikaru Utada is on it, despite the fact she was born to two Japanese parents, she was born an US American national, she then went to Japan to start her career. I tried to put in a wide range of people, not just talento (some foreign talento make a career out of feeding to the stereotypes about foreigners in Japan). I was going to add in people who tried, but basically flopped like Beckii Cruel and the Cruel Angels (I guess I can do it in another post). For a list of mixed entertainers in Japan: Notable Mixed JPN Entertainers