The princess of AKB48.

The four members kept the fans in suspense by talking nonsensical stuff before finally making an official announcement. As reported earlier, Keiichiro Koyama said something about a new single and Best of Album. (lol, Koyama announcing it early is actually untrue) Now, aside from the NEWS' new single and Best of Album, the Johnny's talents will also be having a concert tour.

Moreover, in order to show their love for the fans who have waited for them for more than a year, fans can participate in their Best of Album. Fans can vote for their "Top Four Favorite NEWS songs" on Johnny's Entertainment site starting Apr 18th at 12nn, JST.

Are you all excited? Vote for your favorite song now!

OMGGGGGGGG!!! Now, this is a COMEBACK.
currently addicted to Party Time so I'm gonna vote for it

TVXQ (Tohoshinki) has certified their status as legends in Japan with their latest performances at the Tokyo Dome.

From April 14th through the 16th, TVXQ held their ‘TVXQ Live Tour 2012 – TONE', at the prestigious Tokyo Dome. The three day concert recorded over 165,000 audience members in attendance, a feat that hasn’t been achieved in 11 years!

Japan’s Sankei Sports reported, “The only foreign artists to have held concerts for three consecutive days at the Tokyo Dome were the late Michael Jackson and the Backstreet Boys. TVXQ has become the third name to make the list by achieving the record for the first time in 11 years.”

TVXQ performed a total of 25 hit tracks, and reporters were quick to point out that the boys looked extremely grateful for the support their fans showed. Yunho had stated, “We’re going to work even harder from here on out. We ask for your continued support.”


I knew the regular ed. looked familiar
I hope someone can find bigger and clearer versions...

On Tuesday, Fuji TV announced its plans to begin uploading several of its shows to its official channels on video site YouTube, allowing users to watch for free. According to the announcement, the network aims to spread its contents globally and to attract new viewers, while also increasing its online advertising revenue.

The “Fuji TV Anime”channel, which currently includes “Thermae Romae” and “Kuchu Buranko,” is limited to viewers in Japan, but the other channels are available worldwide.

The “Idoling!!!” channel will include original contents in addition to videos from the group’s television show.


waiting for VS Arashi

On April 17th, Johnny’s Entertainment announced that TOKIO’s Matsuoka Masahiro was taken to the hospital after falling ill at a sauna.

According to the agency, Matsuoka visited the sauna on the 17th at around 9:00 am. About 2 hours later, he started to feel sick and was rushed to the hospital, where he was diagnosed with dehydration. He returned home at about 3:00 pm after receiving treatment from the doctor.

Consequently, Matsuoka was absent from a press conference for his stage play, ‘Haiiro no Canary‘, which was held later that day at 1:00 pm. Newest Johnny's group, Sexy Zone have achieved their 2nd consecutive no.1 single with "Lady Diamond." It has been 4 months since the last time a debuting group achieved 2 consecutive no.1 singles with Kis-My-Ft2 in December last year ("We never give up!"). For a group in their teens, the last time this was achieved was in June 2008 with Hey!Say!JUMP ("Dreams come true"), 3 years and 11 months ago. The title track is currently being used as the theme song for FujiTV's "Real Scope Z", while the coupling song, "Kaze wo Kitte" is the ending theme for the NHK anime, "Nintama Rantaro."

Meanwhile, Domoto Tsuyoshi, one-half from Johnny's popular duo KinKi Kids, has grabbed the no.1 album spot with "shamanippon -Rakachinotohi-". The last time his solo album acquired the top spot was 6 years and 1 month ago with "Coward" under the name ENDLICHERI☆ENDLICHERI (released in March 2006). This is his 4th no.1 solo album.

In the music-DVD and overall DVD chart, Korean group Choshinsei have achieved their very first no.1 Oricon ranking with "Fan Meeting 2011 "For You" Concert DVD". They are only the 3rd Asian (non-Japanese) male group to have reached the top spot in this ranking after Tohoshinki and JUNSU/JEJUNG/YUCHUN. The fan meeting and concert was recorded in October last year at Saitama Super Arena before their leader, Yoonhak's enlistment into the military.

And in the Blu-Ray chart, 5-girls idol unit Momoiro Clover Z have also finally reached the top spot (either single, album or DVD) for the first time with "「Momoiro Christmas 2011 Saitama Super Arena Taikai」 LIVE BD", selling 14k in the first week. The combined sales of both DVD and BD version is 22k. The video was recorded from their Christmas live at Saitama Super Arena last year with a total of 27 tracks. Additionally they also performed their latest single, "Mouretsu Uchuu Koukyoukyoku Dai 7 Gakushou 「Mugen no Ai」" as one of the concert's highlights.

Also congrats to ClariS and Perfume and others!

On March 9th, Kanjani8’s Nishikido Ryo was seen at a bar in Tokyo attending a group date with KAT-TUN’s Tanaki Koki with pretty 20-something girls. On the 27th of the same month, he was seen at the same bar, in the same set of seats, hosting another group date attended by Arashi’s Matsumoto Jun.

“Koki was wearing casual clothes, and Nishikido was wearing a hat. Both of them didn’t try to disguise themselves and went upstairs to the second floor. Soon after, 4 girls followed them upstairs.”

The two Johnny’s appeared late at night on Friday, March 9th. Bar “B” is a hidden store that famous people often frequent. The bar closes at 2, and it doesn’t get a lot of traffic so people use it as a place to host secret group dates.

There was also another male present, so there were 3 males vs. 4 females at the group date. They ordered many different dishes, from pizza to meat dishes. They were afraid of being found out and so they were pretty quiet at first. The party got rowdier as they drank alcohol, and they were seen having a good time. 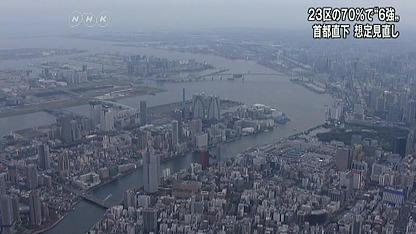 The Tokyo Metropolitan Government says 9,700 people could die in a huge earthquake hitting directly under the capital.

The government's first estimate in 6 years is based on a worst-case scenario of a magnitude-7.3 quake in the northern part of Tokyo Bay, with a focus closer to the ground than previously assumed.

The government says such a quake could collapse or heavily damage nearly 400,000 buildings. It says if the quake hits at around 6 PM on a windy winter day, fires could destroy about 200,000 buildings.

The government also estimated tsunami damage to Tokyo resulting from a magnitude-8 quake occurring at an underwater trough south of Tokyo.

It says a tsunami up to 2.6 meters high could surge into Tokyo Bay, but would be blocked by seawalls and floodgates. But it says if all the floodgates were damaged by the quake and could not be shut, 16 wards would be partially flooded up to about one meter, destroying or heavily damaging up to 2,500 buildings.

Female visual kei band exist†trace released today a preview of 'GINGER', their newest PV, in order to promote the upcoming album 'VIRGIN', which is going to be released on May 23rd. 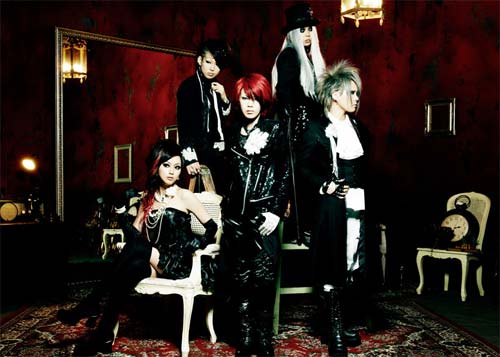 'VIRGIN' is the third album of their career, and the first one since they signed under the major label Tokuma Japan during last summer.

Sounds good! I'm so proud of how much they improved since their indies era!
Collapse