It was announced on Thursday that the "Dragon Quest-style" live-action television series Yuusha Yoshihiko to Maou no Shiro will be returning to Japanese television this October in a still-unnamed "chapter 2." The original Yuusha Yoshihiko series aired on the TV Tokyo network last summer, and was noted for its reminiscence to the Dragon Quest franchise, as well as its visibly low budget.
Yuuichi Fukuda (live-action One-Pound Gospel, Saru Lock) will continue to direct the series, and Takayuki Yamada (Densha Otoko/Train Man film, H2: Kimi to Ita Hibi) will once again play its main role. Haruka Kinami (20th Century Boys), Shin Takuma (live-action Touch), Tsuyoshi Muro (Ooku, Yatterman), and Jiro Sato will also reappear in the program. According to a producer at TV Tokyo, the series' "low budget" will not be changed, nor will its production be "scaled up."
The story of the original was set in an era when the entire country was still overgrown with verdant forests. A mysterious plague has spread across the land, and many have succumbed to it. Somehow, a pure young man named Yoshihiko (Yamada) was chosen to be a hero, and he embarks on a quest to save a village. He has another objective — his father never returned from his own quest to retrieve the cure, and Yoshiko hopes to rescue his father.
Source: 1 | 2


---
cleaned up the article a bit... I'm so excited for this crackfest! XD

On May 14th, the cast of ‘Hotaru no Hikari‘ attended an event to announce the completion of filming for their upcoming movie.

Actress Ayase Haruka claimed that she’s a ‘himono onna’ herself as she said, “I’m a himono onna. I tend to find things very bothersome. When I go home, I take off my pants and socks together.” Announcer Hayama Hélène responded, “How efficient.”

Why am I not surprised by Tegoshi's answer? xD Five most recent works by the same artist to monopolize the top 2 album rankings:

In the singles chart, popular Johnny's group, Arashi have achieved their 27th consecutive no.1 single since "PIK★★NCHI DOUBLE" (released in February 2004) with "Face Down", making it their 34th no.1 single overall. The title song is the theme for the Fuji TV Monday drama, "Kagi no Kakatta Heya" starring Arashi leader, Ohno Satoshi. Previously, their theme song for the Fuji TV drama starring member Matsumoto Jun which was in the same time slot also reached the top spot ("Wild At Heart"), making this their 2nd consecutive no.1 drama theme song in 2 quarters.

Meanwhile, visual-kei band, the GazettE celebrated their 10th anniversary of formation by clinching the no.1 spot in the music-DVD and overall DVD charts for the first time with "TOUR11-12 VENOMOUS CELL FINALE OMEGA LIVE AT 01.14 YOKOHAMA ARENA." This DVD was recorded at their Yokohama Arena final date which concluded their nationwide tour in 27 locations beginning October last year until January 14th this year. They performed 23 tracks including songs from their album "TOXIC" (released last October), to the excitement of 15,000 fans. The band's highest music-DVD ranking previously was "TOUR 2007-2008 STACKED RUBBISH GRAND FINALE [REPEATED COUNTLESS ERROR]IN Kokuritsu Yoyogi Kyougi Jou Daiichi Taiikukan" (released in August 2008) at 3rd place. In CD ranking, their highest position was 3rd in albums chart with "STACKED RUBBISH" (released in July 2007), and 2nd in singles chart with "PLEDGE" (released in December 2010).

Couldn't find the data for Mr.Children's first 2 best albums sold in 2012 only, so would appreciate it if anyone has it. Thanks in advance!

Go for that 2 million of albums, Misuchiru! XD And so glad to see that Yuzu are doing well too! LOL at top 3 albums from Toy's Factory. :)

SM Entertainment’s joint venture SM-Kraze, Inc. is set to expand overseas. According to reports in local news agencies, SM-Kraze intends to start operating a hamburger shop in Japan in September 2012.

Media speculate on the possible serving of “Girls’ Generation Burger,” “Super Junior Burger” and “SHINee Burger.” However, reports also say the burger patties will be developed especially for Japan, to appeal to the particular taste of its diners.

The first shop in Japan will be directly operated by the parent company and expansion plans look towards a second restaurant opening under a master franchise. The first store in Japan is said to be located in Omotesando.

Before this development, SM Entertainment has entered into a joint venture with Seoul-based Kraze Burgerto establish SM-Kraze, Inc. As earlier reported, the venture’s first offering is a concept pub in Seoul’s Cheongdamdong District, with Michelin three-star chef Darren Bonhayi directly involved in developing the menu. The store is set to open within the first half of 2012.

What do you think Girls' Gen/Suju/SHINee Burgers would taste like? Doesn't matter, nothing can touch MosBurger kinpira burger... 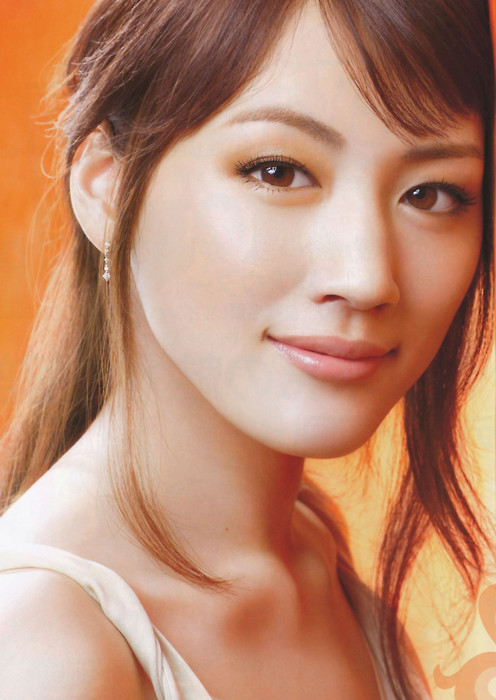 Based on their dramas, movies & CMs. Results published in Asahi Genou.

On May 15th, it was revealed actress Sawajiri Erika was on hiatus since mid-May due to poor health. Allegedly, she is suffering from symptoms close to that of multiple personality disorder, and told by her doctor to cease activities.

Since she has made a hole in her career, it’d be proper Sawajiri be criticized, however, these circumstances are different. According to a movie insider, “Lately she’s been strange. At one moment she’s highly emotional, the next she’s depressed… I thought maybe it was multiple personality disorder.” In the movie Helter Skelter, Sawajiri plays a model named Ririko who received plastic surgery on her entire body. In the movie, not only is Sawajiri to reveal her assumed F cup breasts, but she is also to take part in an extreme sex scene and a lesbian scene.

this is so fanfiction-esque. But the trailer for this movie looks pretty good, and it has Kiko in it!

It's a cover of TEAM H's "GOTTA GETCHA"

Kobayashi Susumu has passed away from cirrhosis of the liver. He died at 10:45 in the afternoon on the 16th. He was 58.

According to people close to him, Kobayashi suffered from illness for several years, and after the filming of “Odoru Daisousasen THE FINAL Aratanaru Kibou” this year in February, he received a diagnosis of a remainder of 2 or 3 weeks left and became hospitalized.

Kobayashi worked as an actor since the 1990s, and he famously played the role of Tsukushi’s father in “Hana Yori Dango”. Kobayashi also acted in roles in dramas such as “Long Vacation” and “Siberia Chou Tokyuu”.

When people who acted in dramas I watched a long time ago begin to die, it's only a reminder of how much time has passed, how much things have changed, how much I'm getting older. :(