Japanese group Hey!Say!Jump arrived today in Hongkong to over a hundred fans waiting at the airport. But Hey!Say!Jump left via the secret/VIP passageway. Members paused for a few moments to let fans take pictures, and give a friendly smile and wave to the fans.

All 9 members arrived together with A.B.C-Z. There are more than 30 staff and 10 security who were all fetched by the 2 24-seater car. Hey!Say!Jump will hold 4 concerts in 2 days at the Hongkong International Trade and Exhibition Centre.

edit: Johnny Kitagawa also came together with them [not in a wheelchair]

Two delegations of Japanese officials visited Palisades Park, N.J., this month with a request that took local administrators by surprise: The Japanese wanted a small monument removed from a public park.

The monument, a brass plaque on a block of stone, was dedicated in 2010 to the memory of so-called comfort women, tens of thousands of women and girls, many Korean, who were forced into sexual slavery by Japanese soldiers during World War II.

But the Japanese lobbying to remove the monument seems to have backfired — and deepened animosity between Japan and South Korea over the issue of comfort women, a longstanding irritant in their relations.

The authorities in Palisades Park, a borough across the Hudson River from Manhattan, rejected the demand, and now the Japanese effort is prompting Korean groups in the New York region and across the country to plan more such monuments.

“They’re helping us, actually,” said Chejin Park, a lawyer at the Korean American Voters’ Council, a civic group that championed the memorial in Palisades Park, where more than half of the population of about 20,000 is of Korean descent, according to the Census Bureau. “We can increase the awareness of this issue.”

Korean groups have been further motivated by a letter-writing campaign in Japan in opposition to a proposal by Peter Koo, a New York councilman and Chinese immigrant, to rename a street in Flushing, Queens, in honor of comfort women.

Mr. Park said that in the past week or so, his organization had received calls from at least five Korean community organizers around the country — in Georgia, Michigan, New Jersey and Texas — expressing interest in building their own memorials. These would be in addition to at least four memorials in the works in California and Georgia, he added.

The monument in Palisades Park is the only one in the United States dedicated to comfort women, borough officials said.

Tensions between Japan and South Korea over the legacy of comfort women were reignited in December when a bronze statue in honor of victims was installed across the street from the Japanese Embassy in Seoul, the South Korean capital. Japanese officials have asked the Korean authorities to remove that statue.

Japanese leaders have said that their formal apologies, expressions of remorse and admissions of responsibility regarding the treatment of comfort women are sufficient, including an offer to set up a $1 billion fund for victims. But many Koreans contend that those actions are inadequate. Surviving victims have rejected the fund because it would be financed by private money. The victims are seeking government reparations.

In Tomohisa Yamashita's radio program, Cross Space, he gave his listeners a chance to listen to his latest single, here is the full audio of "LOVE CHASE".

It was earlier reported that Tomohisa Yamashita's (YamaPi) latest single- "LOVE CHASE" will be used for anime "Toriko". Warner Music Japan recently released the accompanying tracklist for the said single that was produced by MONKEY MAJIK.

"LOVE CHASE" will be available in three versions on July 4th, here are the tracklist:

better than Ai Texas, but I still want another Loveless.
with the bunch of JE releases already announced for June & Pi for 1st week of July, that leaves the rest of the month for NEWS' comeback single. DXX

The rookie male idol group A-JAX has confirmed their participation in a Japanese concert called “A-Nation” before their formal debut in Japan.

On the 23rd, DSP Media officials announced “A-JAX will be taking part in japanese music festival called 'A-Nation' this coming August to be held in Tokyo”. A-Nation is one of Japan’s leading summer music festivals where Japan’s top artists attend.

A-JAX will be performing on the 1st day of the concert on the 9th as the opening act. Still not having their official debut in Korea, it is an exceptional achievement for A-JAX to take part in a large scale performance.

The concert entitled “Asia Progress M” will be held in Yoyogi Stadium in Tokyo where up-and-coming asian male artists and artists under the record label AVEX will be performing.

Various artists from different countries and record labels are expected to participate. Meanwhile, A-JAX will be appearing at KARA’s last concert in Japan as the opening act for KARSIA Saitama on the 26th and 27th. Their debut countdown goes on from there.

A-Nation+DSPBOYZ Forum (I can't find the original korean article, when i do I'll add it in!)

They performed the song for the first time during today's Girls Award Spring/Summer 2012.
The song is one of the a side from the upcoming double a-side single One・Two・Three/ The Matenrou Show.

EDIT:
Fan Recording of the Performance

It's a very good electropop song especially if you consider the fact that they are an idol group and came out with PyokoPyoko Ultra earlier this year.
Tsunku is finally starting to catch up with current music scene.

Recently, AKB48 were on Music Station to perform their latest single, Manatsu no Sounds Good.

Here are the perfs as well as talk segments from Music Station.

Just in case that link goes private/doesn't work, you can watch the full Music Station episode over here:
http://v.youku.com/v_show/id_XNDAyNDY5NTk2.html Lol wouldn't have noticed this if it wasn't for this screenshot.
SAYANEE (at back, 2nd from left)  = DERP FOREVER.

Edit: Oh and I almost forgot...to the lovely users of arama who are reading this, I'm taking part in an official 48related competition on Google Plus and would appreciate it if you could check out my post here on Yamamoto Sayaka (NMB48) and if you like it, +1!!
https://plus.google.com/110872815317078862858/posts/7DUWS9teX3y
User with most +1s win and gets a personal video from his/her favourite member!! Especially to Malaysians, I'm a fellow Malaysian Jpop fan so would you please help one in need? *shot* I know I sound pathetic now but it'll only take some of your time!! To anyone at all that's willing to help, all your support and +1s would be kindly appreciated!! Thank you!!  *Done with shameless self promoting. *Mods don't kill me :3* 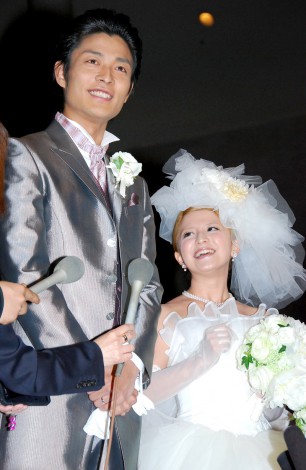 After holding their ceremony, the two held a press conference at their reception, where Nakamura expressed, “I was moved. Both our fathers cried from beginning to end, which made me cry. But as the groom, I think I was able to hold a successful wedding ceremony.” Meanwhile, Yaguchi revealed, “I’ve always lived at my parents’ house, so it really hit me when I thought about how I would be leaving.”

This gives me a lot of emotion, I love weddings ;A; They look so happy and in love
Collapse