lol poor Chinen kept on twirling on air while everyone's drumming
& no one warned me there's a HIPROLL in Boku Wa Vampire!

The first day of L’Arc~en~Ciel’s “20th L’Anniversary WORLD TOUR 2012 THE FINAL.” gigs at the National Stadium was held on the 26th May.

Having toured the world, the band played a string of ‘welcome home’ gigs at the Nissan Stadium and USJ. The band overwhelmed the audience with a jam-packed set list and large-scale staging, marking the grand finale of their world tour.

As the show opened, a marching band playing ‘Niji’ entered via the stadium gates. As the melody continued, the 4 members appeared on a float, greeted by enormous cheers and applause from the audience. The float made a journey around half of the stadium, eventually reaching the backstand. Once there, a fire was lit on the Olympic cauldron at the top of the stands as the crowd watched with excitement.

Electronic-rock group Boom Boom Satellites have finally released the (non-restricted) music video for their new single "Broken Mirror"! The single will be their first new release in nearly two years since To The Loveless. The group had moved studios when the earthquake/tsunami hit Japan which then delayed their productions.  This single is the theme song to episode 5 of Mobile Suit Gundam UC and is their 15th anniversary single~ Buy your copy of "Broken Mirror" on June 6, 2012!

Also, BBS is hosting a contest for its fans! On the single will be parts of a remix song that contestants can use to create a remix! Any program can be used for remixing! Applications will be accepted starting from the single’s release date on June 6 via Nico Nico Douga: Zero. In the first ten days of August, the members of BOOM BOOM SATELLITES will pick a winner.  The chosen fan song will be included in the group’s upcoming remix album, due out in September.

I can't embed facebook videos, but you can find the restricted-free music video here on their official facebook page! In the overall DVD and music-DVD chart, popular Johnny's group, Arashi have topped both charts simultaneously with "ARASHI LIVE TOUR Beautiful World". Their total DVD sales now have reached 6.144 million, making them the only artist to have exceeded more than 6 million of DVD sales. In 2nd place is Morning Musume with a total of 2.724 million of DVD sales. This is the 2nd best-selling music-DVD in the first week in history so far. At no.1 is Arashi's "ARASHI 10-11 TOUR "Scene" ~Kimi to Boku no Miteiru Fuukei~ STADIUM" (released in January 2011) with 618k copies sold in the first week. Arashi have now dominated the top 5 best-selling music-DVDs in the first week historically.

Go for the millions, Misuchiru! XD

Also congrats to NYC, GLAY, Yuzu, Kana and others!

Your click of vote will bring L'Arc～en～Ciel to your city!The cities for the next WORLD TOUR will be chosen by your votes from around the world!!!Voting starts on 6/1/2012 at 8:00AM (GMT)!

June 1, 2012 Marks the ultimate battle of Laruku's Fandom from Around the world in order to bring LARUKU to their Country xD

p.s. it starts at exactly 3 pm of June 1 in Philippines. Oh I really hope many Filipino fans know this!! (>o<) and if you wanna check out the exact time in which you can vote go HERE

Authorities in Japan have arrested a suspected video games pirate in the first case of its kind, according to Nintendo.

An amendment to the Unfair Competition Prevention Act, introduced in December, made it a crime to sell devices that circumvent security controls.

The games company said the case involved the sale of kit designed to work with its DS handheld console.

It said it hoped the case would discourage other illegal vendors.

Nintendo says police in the central Aichi region made the arrest.

When plugged into a console's cartridge slot the machine activates a special interface which then allows the user to select which program to run off a SD memory card.

( Collapse )
The man is trying to take all the joy from life ;A;
Source: BBC

Song is typical Mano but it's cute. 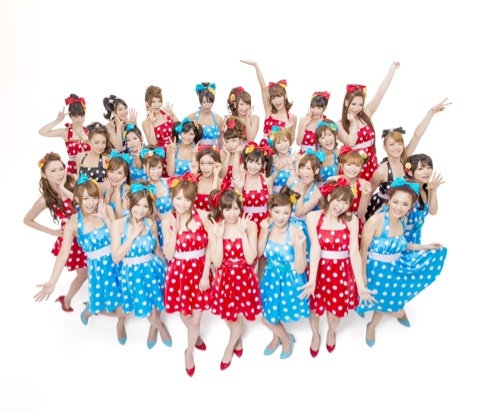 Recently, popular idol group, Ebisu Muscats announced their 7th single, set to be released on June 27th. On their official site, they revealed the name, track list and small covers of the album. The group currently has 31 members, including the 3 girls of black muscats, and 4 muscats units. The single, Oyafukou Beibe, comes in four versions of Limited Type A, Limited Type B, Limited Type C and Regular Edition. Each limited edition comes in the form of CD+DVD while the regular edition is CD only.

Please check out the track list below + BTS images. Nozomu Hayashi and Toru Higashioka of the The Asahi Shimbun report:

Territorial and historical issues are resurfacing to strain Japan's relations with China and South Korea, forcing scheduled visits of high-ranking defense officials from both countries to be canceled.

“Not all the countries get along perfectly well with their neighboring countries. We will have to work hard to overcome problems with certain backgrounds,” Genba told a news conference on May 23.

What is going on? I just can't...Anyway, kudos to Japan for giving the Syrian ambassador the boot. Waiting for you China...IDK about SK