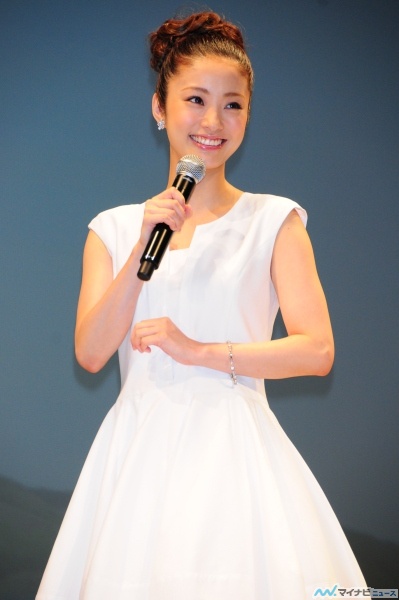 On May 29, actress Aya Ueto attended a press conference for the unveiling of the Softbank/Wilcom summer lineup.

Ueto, who currently stars in Softbank's "in Rome" commercial series, appeared on staged in a white dress. When asked about her Roman sojourn, she thanked CEO Masayoshi Son for arranging the trip and further commented, "It was so much fun. We spent three luxurious days there." Kanako Higuchi, who plays the role of mom in the series, also joined Ueto in Rome. "All of our sight-seeing and lunch breaks were synchronized so we saw each other at every spot we visited," she added.

During the press conference, Son unveiled the Pantone 5, the world's first smartphone equiped with a radiation detector. Actor Dante Carver and comedians Junior Chihara and Sugi-chan were also in attendance.

Aya will be on the package of this Pantone 5 cellphone. Legendary <3

Looking very much pregnant and already in her 5 months, Meisa Kuroki shows-off her baby bump at the recent press conference for the upcoming Taiga drama, "Yae No Sakura".

At the press conference last May 30th, Kuroki was seen wearing a white blazer, which did so little to cover her plump stomach. The singer-actress, who married Jin Akanishi last February, was often seen placing her hand on her stomach during the conference. Kuroki is expected to give birth by mid-October.

In the drama, Kuroki will play Nijiima Yae's rival, which will be played by Ayase Haruka. The NHK drama will start shooting this summer, but Kuroki won't be joining the cast until she have given birth to avoid any complications that might delay the shoot.

"Yae No Sakura" won't be released until Jan 2013, it will be a 50-episode drama that is expected to last for the entire year.

Her baby bump looks wide.  I think she's going to have a girl.  What do you think, arama?

Open to: All, detailed results viewable to: All. Participants: 461

Do you think Meisa is going to have a boy or a girl? 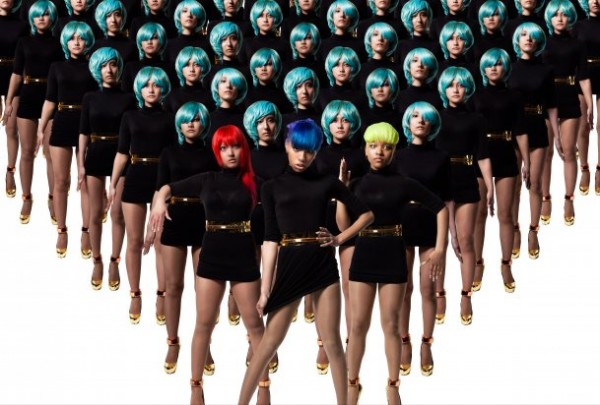 It’s been reported that rock band Ziyoou-Vachi guitarist Gigi-chan has left the band.

Just before the band kicked off their tour, ‘Kujaku Fujin‘, in March, Gigi-chan had complained about the poor condition of her right hand. After getting examined by a doctor, she was required to receive medical treatment over a long period of time. In order to focus on treatment, Gigi-chan decided to leave the band.

Ziyoou-Vachi will continue their activities by adding an unspecified large number of performers to their band. Their first performance will be their concert, ‘Kamen no Utage Dainiya‘, on June 1 at SHIBUYA AX. Arashi released their latest DVD ‘ARASHI LIVE TOUR Beautiful World‘ on May 23rd, and topped the Oricon Weekly DVD Ranking Chart for the week of June 4th by selling 572,000 copies in its first week of sales.

With this latest DVD, Arashi has sold a total of 6,144,000 copies of DVDs in their career. With this, they broke their own record of total DVD sales figure for an artist. Morning Musume is in second place by selling 2,724,000 copies of DVD’s, so it seems Arashi’s record won’t be broken any time soon.

BONNIE PINK has announced that she will be releasing her new album, “Chasing Hope“, on July 25th!

This marks BONNIE PINK’s first album since releasing “Dear Diary” a year and 9 months ago, and it’s also her 12th album overall. “Chasing Hope” will feature 12 tracks including “Tsumetai Ame“, the theme song for drama “Dirty Mama!“, as well as her latest single, “Machi no Namae“.

The limited edition version will come with a DVD containing footage from BONNIE PINK’s Tokyo concert of her 2010 tour.

Just as every other year, Japanese music and entertainment label Avex will be organizing "A-Nation" with its artists. This year, however, the label is set to organize "musicweek", spreading various artists across themed days.

Earlier this year, U-Kiss was already noted to have been added to the line-up but more recently another three Korean groups were revealed. SHU-I, a group which originally debuted in Korea in 2009 with "Bomb Bomb Bomb", is set to release its first Japanese full length album in July. A-Jax, on the other hand, has yet to release their Korean and Japanese debut, but were added nonetheless. Joining these boy groups, YG Entertainment's 2NE1 is set to perform on the concert as well.

2NE1 is set to appear on August 3rd, on "Verbal presents... 'Oto Matsuri'". The girl group already worked together with rapper Verbal (m-flo) before, assuming they'll be doing a collaboration stage on the said day. 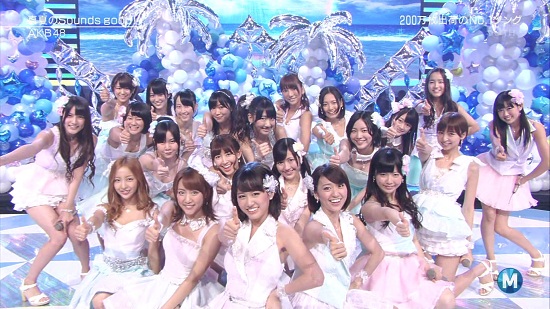 As we all know, AKB48’s 4th General Election will be held on June 6th at Nippon Budokan. The top 64 girls will be divided into 4 groups, ‘27th Single Senbatsu Members’, ‘Under Girls’, ‘Next Girls’, and ‘Future Girls’, with 16 members in each respective group. They will be in charge of the title and coupling tracks for the group’s 27th single.

On May 31st, it was revealed that AKB48’s 27th single will be used by several different companies, and the girls will be starring in their TV CMs. The ‘27th Single Senbatsu Members’ (girls ranked #1-#27) have earned tie in’s with ‘NTT Purara Hikari TV‘, ‘UHA Mikakuto Puccho‘, and ‘Apamanshop‘, and will be featured in their CMs. Meanwhile, the ‘Under Girls’ (#17-#32) will star in CMs for ‘Seven Net Shopping‘.

KAT-TUN have revealed the tracklisting for their upcoming single, "TO THE LIMIT". The said single will be released on June 27th in regular and limited edition.

The 5-member group decided challenge themselves with a new genre to conquer. Their latest single is a heavy-rock song that talks about the members being unsatisfied with the usual "status-quo". Thus, they go ahead in pushing to the limits of grasping their dreams and conquering their future.

It’s been revealed that AKB48’s new unit NO NAME will be making their CD debut with the single, “Kibou ni Tsuite“, on August 1st! This song is currently the opening theme song for AKB48’s tv anime series, ‘AKB0048‘.

Aside from the title track, the single will feature the anime’s ending theme, “Yume wa Nandomo Umare Kawaru“, and a brand new number for a total of 3 song. All song lyrics are written by producer Akimoto Yasushi.

Stay tuned for more details on NO NAME’s debut single!

On May 30, it was reported that Japan’s oldest movie director Shindo Kaneto passed away at 9:24 am on May 29 JST.

Shindo, who just celebrated his 100th birthday in April, never stopped making movies since starting his career during the pre-war period. He never lost his urge to create and his love for movies. He released his latest movie ‘Ichimai no Hagaki‘ at the end of 2011 at the age of 99, which earned him many awards.

According to the official statement, his granddaughter Shindo Kaze (a movie director herself), with whom he had been living, noticed that something was wrong and called their family doctor, but Shindo had already passed away before the doctor arrived. His last public appearance was at his birthday party on April 22. At the beginning of May, Shindo had become bedridden for most of the day and was only able to leave it for meals.

Shindo had lived a life full of ups and downs. In 1934, he entered the Shinko Kinema film studio and began to study under movie director Mizoguchi Kenji. After the Second World War, he started to work as a scriptwriter and made a name for himself by writing the script for Kinoshita Keisuke’s ‘Ojo-san Kanpai!‘ (‘Let’s Toast the Young Lady‘). However, when he was taunted for not being commercially successful, he founded the independent film company Kindai Eiga Kyokai in 1950 in order to have more freedom and not be pressured by big film studios.

As Japanese pop culture is increasingly dominated by insular subcultural groups with little interest in what's happening outside Akihabara's otaku haven or Shibuya's gyaru mecca, the news that electro-pop trio Perfume had moved to major label Universal and made its music available online to overseas audiences was a breath of fresh air that gave even the most cynical hacks at JT Towers a glimpse of hope for a long overdue international J-pop success story.

Despite (or because of) having pretty much the most distinctive musical identity in contemporary Japanese pop, Perfume could be well placed to avoid the mistakes that have seen so many others stumble.

( Collapse )
Another interesting article about Perfume's chance at making it internationally. There's been a lot of talk about them making an international debut but so far nothing's really come of it...
Source

I am in love with everything about this single and can't wait for it to be released! I can't wait to see the PV for the b-side 'Bathtub' as well! :D

Click here for the complete details on the single!

{Epic} rock band Abgindon Boys School's comeback is coming closer as recently they announced that their new song WE aRE will be the theme song to the upcoming release of Capcom's Sengoku Basara HD: Sengoku Collection! A promotional trailer for Sengoku Basara HD has been released, and guess what, you can take a listen to their new song in the video below!

Details on the new single will be announced soon on their official site!

As much as I love TMR, so effing glad ABS is back <3
Collapse