lol wtf. this is so lulzy and looks cheap v___v

The album will come in two versions. The limited edition will have 12 tracks, including their last five singles “FLY HIGH“, “Addicted to love“, “Let’s get it on“, “Be As One“, and “You & I“.

In addition, “Listen to the Rain” will be the lead track on the album along with six more new songs. The DVD will contain the music videos and the making-of videos for “Addicted to love”, “Let’s get it on”, “Be As One”, and “You & I”.

been waiting for their new album since forever. loving the song on the cm already

The song will be used as the theme to the upcoming Pokemon movie “Pocket Monsters Best Wishes! The Movie: Kyurem vs. the Sacred Swordsman: Keldeo“, which will open in theaters across Japan on July 14th.

The single comes in two different versions: a limited ‘Pokemon’ version featuring the main characters of the new movie – Satoshi, Pikachu, the character Rola voices (Marine), and other Pokemon; a regular version with Rola on the cover. The photo, different from what Rola fans are used to seeing, matches the theme of a kind, yet painful love as expressed in the lyrics.

the covers are soo plain...
& what happenend to Just a little bit!!!
though she sounds sooo good in memories kinda boring song though

Touming Magazine, a 4-member alternative rock band from Taiwan is signing a contract with EMI Music Japan. It has been announced that the band will make their grand debut in Japan with the release of their debut single Touming Magazine FOREVER on July 18.

Touming Magazine have been active in the Taiwanese music scene since 2006 and publicly state they have been influenced by PIXIES, WEEZER, SONIC YOUTH, SUPERCHUNK, CAP'N JAZZ, and NUMBER GIRL since their inception. The band's sound and global view have given the band its other name, the "NUMBER GIRL of Taiwan."

Despite the band's debut album Our Soul Music (released in their home country Taiwan at the end of 2010) is only available in Japan as imported CD, it has become much talked about among rock music fans who are quick to obtain information. The band released a Japan-only album with the same name but in Japanese (Bokutachi no sōru myuūjikku) in July 2011, which includes the music source they produced for the Taiwanese original. The band excited Japanese music fans with solid and showy live performance at their Japan tour in fall of the same year.

The single CD Touming Magazine FOREVER will be sold by EMI, the record company with whom NUMBER GIRL used to have a recording contract, and will have 4 new recordings including the debut single. In addition to this CD, a limited Japanese edition CD is also being planned and which will include 2 bonus tracks.

Touming Magzaine are scheduled to perform at the METEO NIGHT 2012 event to be hosted on August 5 by Less Than TV, an event that will be held at three venues in Tokyo, namely Shibuya O-WEST, Shibuya O-nest, and Shibuya 7th FLOOR, simultaneously. There are also plans for the band to do a Japan tour.


Now Check Out Touming Magazine MV for Hell (not sure, hopefully a taiwanese fan can reassure me or correct me)
directed by Kazunori Tetsuka
uploaded on July. 10, 2011 cuz i have no idea about the release date of this or if it's the latest one.......
with english subs as well

for those intrested in more of their music
Check out their official YT Channel : TOUMINGMAGAZINE

that first song isn't bad at all...

Aya Ueto (26) will star in a new NHK drama series in January 2013, it has been announced. The series, titled "Itsuka Hi no Ataru Basho de" (Someday, Somewhere Under the Sun), is an adaptation of the Asa Nonami (51) novel by the same name and its second installment, "Surechigau Senaka o". 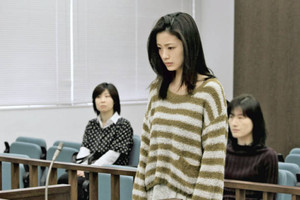 Ueto will play the role of Hako Komoridani, a college student whose affair with a man she is helping become a top-ranking club host plunges her into debt. In order to solve her precarious financial situation, she begins seducing men into following her to love hotels where she then drugs and robs them.

Komoridani is eventually arrested and sentenced to 7 years of imprisonment. At the women's penitentiary, she meets Ayaka Eguchi (played by Naoko Iijima), a mother serving a 5-year sentence for the murder of her abusive husband, who is in fact covering for her son's crime. After their release, Komoridani becomes a dog wear designer while Eguchi finds work in a bakery.

The series will tell the story of a friendship between two self-reliant women carrying the burden of a past they want to bury who find support and encouragement from each other.

Commenting on the casting of Ueto, a production member explained, "She can handle this type of multidimensional role with a natural spiritedness. She is also the perfect fit for this character who has all these men wrapped around her finger. Her love life after being released from prison will be interesting to follow."

Filming began on May 17 in Tokyo. In a press statement, Ueto comments, "I want my portrayal of this woman who reintegrates society after having committed a crime and whose new-found interactions with the outside world help her grow as a person to be as real as possible." "Naoko is sweet and tough," Ueto said about her co-star. "She feels just like an older sister to me."

Other cast members include Takumi Saitoh (30), comedian Shūsuke Fukutoku (28), and Atsuko Asano (51). Singer-songwriter Yumi Matsutoya (58) will provide the theme song for the drama.