ACE OF SPADES will release their 1st single 'WILD TRIBE' on the 22nd August , The first promo for the 2012 remake of the GTO: Great Teacher Onizuka Jdrama series starring Exile's band member Akira as the titular character. The series will premiere starting this July.

GTO: Great Teacher Onizuka follows the story of Onizuka Eikichi, a graduate of a third-rate University and the leader of a motorcycle gang and have a lifelong dream to become a teacher. After being hired by a seemingly eccentric director, Onizuka begins his unconventional way of teaching a hopeless group of troublemakers.

The series will premiere on the Fuji TV network this July 3rd, and will run every Tuesdays at the 10 PM timeslot.

It has been earlier reported that Kanjani8's superhero characters "Eito Rangers" will be releasing their first single titled "ER".

The said single will be used as the theme song for "EIGHTRANGER" movie to be shown on July 28th.

Sure, you might get a taste now and then if you're a hardcore anime otaku, but even then you're not getting an accurate feel for what's going on in the sweaty back alley clubs of Tokyo or Osaka. For that, you need to dig deep and have a passion for chasing down the ghostly hints of guitar feedback humming just beyond the horizon. Word of mouth from fellow fans is stronger than any billion dollar PR machine when that machine speaks a foreign language. 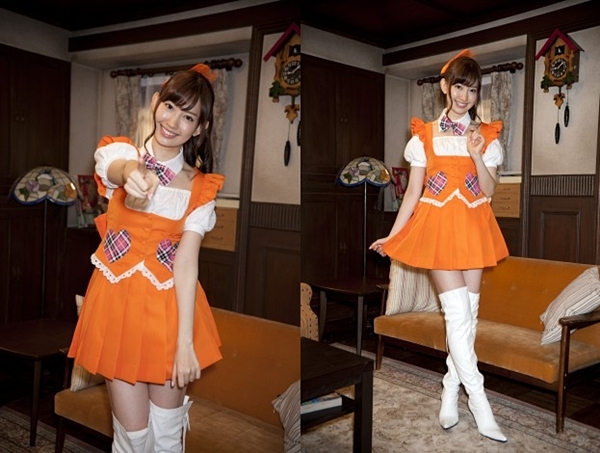 On July 2nd, it was revealed that AKB48’s Kojima Haruna will star in a late-night drama called ‘Megu-tan tte Mahou Tsukaeruno?‘ on NTV this coming summer season.

Kojima is going to play a mage-to-be called Megu, who is a total airhead and always gets treated as a poor student at her magic school. In order to get more practice, she gets dispatched to a boarding home in the human world called ‘Rokudemo Sou’, where she has to be a manager. However, her identity as a mage may never be exposed or she will never be able to return to her home world.

It’s been four years since Kojima’s last starring role in a drama. She commented, “Of course I’m nervous, but I’m not really feeling more pressure only because it’s a starring role.” People around her often call her a natural airhead, so you might think that this is the perfect role for her, but Kojima herself begs to differ. “I’m really not an airhead, which is why I’ll be able to portray this role accurately.”

profile of the girls are up on Puretty tumblr fansite

I hope this gets a performance, because i am luving the choreography and I actually like the song
since i found the song a bit annoying from the preview

Kyary Pamyu Pamyu is known for her energy and charisma, but now some disturbing rumors about the energetic pop star have suddenly risen to the surface.

It’s her business and her business only if she did have sex in high school or if she has sex PERIOD, but if she was using it to get ahead in the industry…

Their debut single Fallin' Love was used as the theme song for the movie Koukou Debut.
Their 2nd single, Lovers,  was used for the opening of anime Naruto and their 3rd single Bye Bye was also used for an anime, Kimi to Boku.

For their 4th single it seems No tie-up, BUT the B-side Niji Iro
has been used for "Support Project Fukuoka Softbank Hawks" Asahi beer CM
AND will also be used as the theme song for  morning program FCI Morning EYE!


7!! & Becky introducing themselves on FCI Morning EYE
BECKY WILL ALSO BE TAKING PART OF THE THEME SONG AS WELL
YEAH FOR SUBTITLES & Becky & 7!! in the same sentence!!!!!!

Niji Iro will be released on rechoku on 7/7. They will also be holding their first one man live the same day(July 7) at
Harajuku astro Hall venue. Days later they will join SCANDAL, FLIP, Stereopony and Dolls for another live at the SHIBUYA-AX: venue  on July 16th
they are probably all friends from all the lives they keep doing together XD

Listen to a preview of Niji Iro HERE only if you live in Japan cuz it's not available in other countries.....

SOOOO excited, by the title it's going to be a good one XD
also YEEEEEEEAHHHHHHH
my userpic FINALLY matches my post XD
showing some MAIKO & NANAE love<3 Korean band CNBLUE has revealed the track list and PV teaser for their upcoming single, “Come on“!

“Come on” is the band’s 3rd Japanese major single and it’s scheduled for release on August 1st. It will be available in 3 different versions: Limited Edition, Regular Edition, and a Lawson-only Edition.