NYC, why are you suddenly so active this year?

The verses are slow and boring, but the chorus is nice. The outfits are arguably better than the flimsy ones they had before. 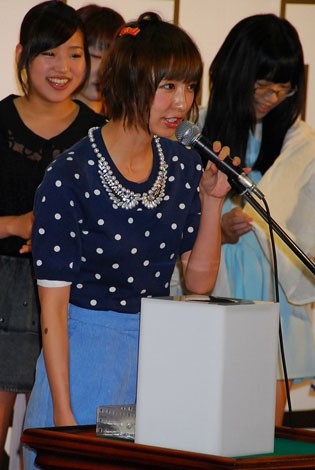 All 86 members who will participate the tournament drew lots. Watanabe Mayu(18), who won 2nd spot in the election is seeded for 1st round and will join the tournament from the 2nd round. Besides, her opponent that she will face in the 2nd round  already declared her withdrawal from the tournament, so Mayu will be selected for Senbatsu by just winning only one battle, the 3rd round. The member who declared withdrawal is Masuda Yuka (20). The reason for her move is because she wants to focus on her work for Miyamoto Amon produced musical "Whiz".
The last tournament's winner Shinoda Mariko (26) will join from the 2nd round and will face Ohya Shizuka (20), who is also in team A and also from Fukuoka, the hometown of Shinoda.
The final tournament will be held on Sep 18 at Nippon Budo-Kan.

Oshima Yuko to face the winner of the match between Kuramochi Asuka vs Kawaei Rina.
The only member who has participated in all singles of AKB as Senbatsu, Kojima Haruna will face Yamauchi Suzuran in the 1st round.

The only 4 members who won Senbatsu position both in past 2 Janken tournaments are Kojima Haruna (24), Kasai Tomomi (20), Sato Sumire (18) and Maeda Ami (17)

This year's tournament has total of 65 regular members from AKB48 (not including Masuda Yuka) plus Matsui Jurina and Watanabe Miyuki, as both of them have concurrent positions in AKB48. In addition, 8 members from SKE48, 6 members from NMB48 (Shinohara Kanna, Hikawa Ayame, Kawakami Reina, Takano Yui and Kotani Riho), 3 members from HKT48 (Eto Sayaka, Moriyasu Madoka and Nakanishi Chiyori) and 1 member from AKB's KKS will join this tournament, making total of 85 members will try their luck to seize their Chance no Junban!!
source 1, 2.
( Collapse )
I'm sorry if this is a mess but I tried to simplify things mashing up two articles D:

While marriage rates in Japan have been declining overall, a growing number of Japanese women seem to be giving up on their male counterparts and dating foreign men.

So what is it about foreign guys that draws Japanese women to them? Kanae Hara at Gow Magazine writes: “Just this year, I’ve had one friend get married to an American and another to an Australian. Both of them moved overseas with their partners. They both tell me that foreigners are more expressive with their love and make them feel happy to have been born a woman.“

Hara continues by sharing 10 ways foreign guys express their affection that make their Japanese girlfriends fall head over heels. We’ve translated the list below, so be sure to take notes if you’re looking for some pointers on how to woo a Japanese girl!

The debut DVD and single CD set Sekai no minasan e / shūgōtai of 19-year-old singer-songwriter Emiri Ota will be released on August 1.

Emiri Ota began creating songs from when she was in elementary school. In 2007 she won the grand prix at The 1st Music Revolution JAPAN FINAL, the biggest music contest in Japan, and went on to perform live mainly in the Kansai region. From her pretty appearance one would find it hard to imagine her eccentric performance and her talent in music expression. She is slowly becoming the hot topic among artists like Yuko Ando and Daichi Miura, musicians, and other music-related figures.


Her debut music will be released in the form of a DVD + CD set to allow people buying the set a visual and sound experience of her overwhelmingly powerful performance. The DVD will come with 5 videos of studio live recording by director Tetsuma Maki, while the CD will contain an arrangement title by Masanori Shimada.