Johnny’s group SMAP was able to clinch the top spot in Oricon Weekly for their latest single "Moment", which was released August 1st.

“Moment” is the group’s 48th single that is currently used as the main theme song for TBS coverage of London Olympics 2012 where SMAP’s Nakai Masahiro serves as the main caster.

“Moment” sold 137,000 on its first week. Their last single “Sakasama no Sora” was able to climb the top spot for its first week as well.

In lieu of this, SMAP has now become number one in the ranking of “Successive Top 10 Singles Release“.

Here is the present TOP 3 Ranking:

Furthermore, the group will be releasing their album “GIFT of SMAP" August 8th.

Doesn't surprise me in the least tbqh. Boys are staying strong and awesome single is awesome as glorious album is glorious. It's been a basically flaw-free year thus far and they still have the lives coming up <33

EDIT: big thanks to

apneatic_melody for pointing out the major mistranslation by the source, it's top 10 singles not #1, which actually makes much more sense considering their track record in their very early years |D Still flaw-free boys are flaw-free.

I guess the Japanese-esque part of it comes from the giant monster and the sadako-girl.

Fashion & beauty magazine ‘anan‘ is back again with their annual “sex special” issue. It’s been revealed that AKB48’s Kojima Haruna will be covering the special this year.

In previous years, big names such as Yonekura Ryoko, Yamashita Tomohisa, Mukai Osamu, and Darvish Yu has been featured in anan’s once a year project.

Kojima received a lot of attention over her sexy lingerie pictorials in the April 2011 issue of ‘anan’. This time, she’s challenged herself to even more sexy shots by wrapping herself in bed sheets and posing in lingerie with a mature expression. Out of over 1,000 cuts, 12 pictures were carefully selected for the magazine.
( Collapse )

Source
In case the links were removed: 1, 2

Why won't they let Sayaka be on this show every week ;A;

The percentage of Japanese high school girls and female college students who have had sex dropped for the first time in 38 years, a survey released on Aug. 4 found.

According to the survey, the percentage of college male students and female students who have had sex at least once stood at 54 percent and 47 percent, respectively.

The figures represented a drop of 7 percentage points for males and a decline of 14 points for females, compared with the previous survey in 2005.
( Collapse )

A very interesting downward trend...didn't realize the idea of soushokukei/herbivore was spreading to girls as well~ 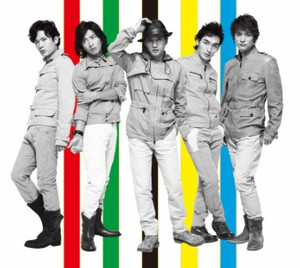 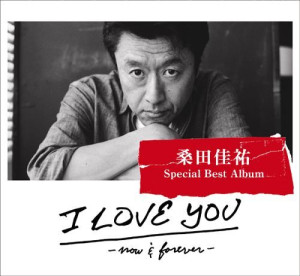 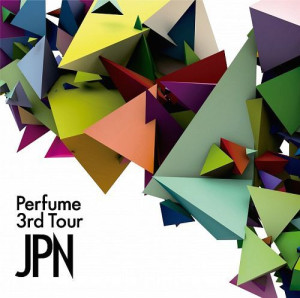 Popular Johnny's group, SMAP have topped the singles chart with "Moment", the theme song to TBS' London Olympic 2012 where SMAP leader, Nakai Masahiro is the caster. As for London Olympic theme songs, Ikimonogakari achieved the highest spot at 3rd place previously with "Kaze ga Fuite Iru." Starting from "freebird" (May 2002), this is SMAP's 15th consecutive no.1 single and 26th no.1 single overall. SMAP have also exceeded B'z's record of most consecutive top 10 singles with 48 singles starting from their debut single, "Can't Stop!! -Loving-" (September 1991). B'z have 47 consecutive top 10 singles so far.

Meanwhile, popular techno-pop unit, Perfume have managed to grab the top spot in the music-DVD and overall DVD chart simultaneously with "Perfume 3rd Tour「JPN」". They are only the second female artists to have topped the overall chart for 5 consecutive times since Utada Hikaru with "traveling", 10 years and 6 months ago. For a female group however, this is the first time. Their previous DVDs to have grabbed the no.1 spot in the overall DVD chart were "Perfume First Tour 「GAME」" (October 2008), "Perfume 「BUDOUKaaaaaaaaaaN!!!!!」" (April 2009), "Perfume Second Tour 2009 「Chokkaku Nitouhen Sankakkei TOUR」" (January 2010), and "Kessei 10 Shuunen, Major Debut 5 Shuunen Kinen! Perfume LIVE @ Tokyo Dome 「1 2 3 4 5 6 7 8 9 10 11」" (February 2011). The first week sales for "Perfume 3rd Tour「JPN」" has also exceeded the previous work, making it their personal best so far.

In the Blu-Ray chart, the dormant rock unit, COMPLEX formed by vocalist Kikkawa Koji and guitarist Hotei Tomoyasu have achieved the no.1 spot with "COMPLEX 20110730 Nippon Ichi Kokoro." The video was recorded last year on 30th July from their charity live for the reconstruction assistance to Japan earthquake, and has sold 20,096 copies in the first week. This is COMPLEX's first Blu-Ray release. The DVD version was released last year in November and entered the music-DVD chart at 3rd place (with 49k sold in the first week), with a total sales of 58k so far. The last time they reached the top spot in the video ranking was with the VHS release of "19901108" (February 1991), 21 years ago.

Congrats to SMAP and Nana and RAD and Perfume! Also congrats to Kuwata-san, again! XD

Pretty sure this has been out for a while, but I hadn't heard a thing about it :x</a>

The results are in for the 2012 top 10 male celebrities gay men don't want to sleep with: 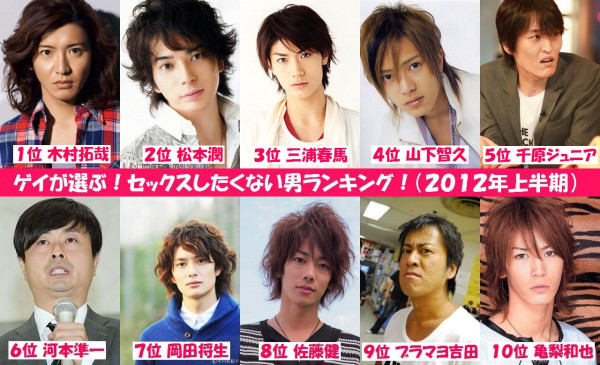 
Note :AP bank is a non-profit organization that provides lending for renewable energy and a variety of other environmental projects.This was settled by Kobayashi Takeshi ,Sakurai Kazutoshi [Mr.Children] and Sakamoto Ryuichi

「AP bank fes」 is the music festival for AP Bank that has been held every year on summer in Tsumagoi (Shizuoka perfecture) but this year they also visited at Michinoku (Miyagi) and Awaji shima (Hyogo). All profits from the event are used as seed money for lending to environmental projects and for ap bank's activity fund. The festival's highlight is the live music of the Bank Band, anchored by Takeshi Kobayashi and Kazutoshi Sakurai, who are joined by guest musicians.

Well, this is a post about Inoo Kei and Architecture.

As you may know/ do not know, Hey! Say! Jump's Inoo Kei is studying Architecture at Meiji University. Currently a 4th year student, he's preparing his graduation thesis. Uni life is private life, so school pictures are not very handy. But here's a rare picture of Inoo Kei in action:

[2012/8/7] As pictured, Inoo was helping the victims of the big earthquake that happened last year 2011, Also his university「Meiji」is supporting the disaster area through reconstruction of the buildings, They are getting help from students who belong to the Department of Architecture in the University who were very helpful in reconstructing the buildings.

Inoo Kei is also part of the Urban Planning Laboratory in Meiji University.

I don't know how he's doing/ going to do it, but I hope he makes it.
I want Chinen to enter uni next. LOLz at his modesty, but seriously he's effortlessly intelligent.

Uchuu Sentai Noiz is composed of Angel Taka, Masato, Kyo, Kotaro and Yamato. They were formed back in 1999 with former members Satt-On and Takeswiy and were known for their onstage antics and hardcore live performances.

The band has been having several overseas performances and made a short stop in the Philippines last year for a small live in Davao City for Mindanao Cosplay Summit as well as partaking in a charity event.

Uchuu Sentai Noiz will be back again in the country, this time not only in Mindanao but also in Manila. This was a surprise video made by the band before their Philippine tour. "Narda" is a song about the fictional comic character "Darna" who changes into a superhero after swallowing a magical stone. Her name is in reverse when she's in normal human form.

NGL, I couldn't help but sing along. In Angel Taka's accent.

My mixi refers to the 'friend list' on mixi.