AKB48's appearance on this week' Music Station was the last to feature group centre Maeda Atsuko, who graduates on August 27th.
During the programme, AKB48 reminisced on the groups history, including their first Music Station appearance to promote 'Skirt, Hirari' in 2006. They also performed a single medley of 'Flying Get', 'Ponytail to Shushu' and new song 'Yume no Kawa'. 'Yume no Kawa' will be Acchan's last song with the group, and the members were so overwhelmed they couldn't control their tears, with Acchan breaking down and crying during the performance.

During an interview on Nihon TV’s “NEWS ZERO” broadcast on August 16th, actress Sawajiri Erika talked about the reason for her return to the movie industry and the truth behind her sullen responses at a press conference back in 2007.

Sawajiri appeared wearing a white T-shirt and jeggings, and was accompanied by director Ninagawa Mika. When asked about her 5 year absence from the movie industry, Sawajiri replied “I wasn’t confident and I wanted to take clear responsibility.”

Her break from show business came about when Sawajiri responded in a terse and sullen manner to reporters’ questions at a press event for her starring movie, “Closed Note” in 2007, sparking a controversy with her behavior. Looking back, Sawajiri commented, “I bit off more than I could chew and was very high-handed and overbearing.” She also remarked laughingly, “In the first place, someone who’s persisting in the entertainment industry would never say something like that.”

Sawajiri returned to the movies with “Helter Skelter”, a production that’s talk of the town due to the bold nude scenes and intense bed scenes. It has since attracted about 1.3 million viewers and the box office is bringing in 2 billion yen.

It’s been announced that the Blu-ray and DVD versions of Karina’s movie “GIRL” will be released on November 21st. “Girl” struck a chord with women across a wide age range and became a great sensation in Japan. It is a movie about girl power and an alarming 99.2% of female viewers stated that they identified with the movie.

The female cast of Karina, Aso Kumiko, Kichise Michiko and Itaya Yuka gathered to answer questions posed by the male cast and the footage is included in the platinum editions of the Blu-ray and DVD release. The ladies answered questions such as, “What would you like a guy to wear on the first date?” and “What does one do to increase ‘girl power’?” The ladies gave frank answers, responding, “It’s also bothersome when the guy goes overboard with what he wears on the first date,” and “Doing your nails and putting makeup will bring up your mood!”

When asked “What kind of guys do you like, in regards to their fashion?” Karina replied, “I like a guy who appears stylish even in sweats!” Fans of Karina will definitely want to check out the contents of the Blu-ray/DVD release. The release is also packed full of contents that many will be interested in seeing such as the numerous stylish outfits and the dance scene by actress Dan Rei.

All 5 members passed HKT48’s 1st generation audition back in 2011, and have been active ever since. According to the announcement, the members requested to withdraw from the group due to “personal reasons“. No further details have been revealed at this time.

Produced by Akimoto Yasushi, HKT48 is the Fukuoka-based sister group of AKB48 that officially started their activities in 2011. Earlier this March, he selected 16 members to form Team H, and they also participated in AKB48’s ‘27th Single General Election‘ in May. Later in June, AKB48’s Sashihara Rino transferred to HKT48.

The 5 girls have become the first members to withdraw from HKT48. From here on, Team H will continue their activities with 14 members and 3 research students.

On the 17th, child actress Honda Miyu (8) performed at the pre-show for “Disney on Ice” at Yokohama Arena. She did a two and half minute routine to the tune of “Beauty and the Beast” that includes a double Salchow jump and a single axel. Honda has been skating since age four and practices five times a week even during drama filming.

Honda came to fame with last year’s big drama hit, NTV’s “Kaseifu no Mita”. She has also various awards under her belt with skating competitions held in the Kansai area. With her experience, she put on a fun performance during the pre-show and the parents and children present were full of cheers and applause.

Honda commented, “I thought I would be a little nervous but I’m really happy.” When asked about participating in the Olympics, she responded, “I’m not sure if I would be able to do it, but I would like to win the gold medal”. She also added, “Next time, I would like to do a double axel jump.”

She's so cute and talented.  We have a future Mao Asada here.

Japanese band B’z kick off their North American tour at the Warfield in San Francisco on Sept 17 to follow up on the release of their 5-song album in English on July 25 exclusively through iTunes.

The self-titled album includes the newly released single, “Into Free-Dangan-” featured in the video game “Dragon’s Dogma,” and has sold over a million units worldwide. The opening track of the album, “Love Bomb,” was originally titled “Ai no Bakudan” and was a number one hit in Japan for B’z in 2005. All of the songs on the album have been re-produced with English lyrics to coincide with the North American tour.

Formed in 1988, B’z are guitarist Tak Matsumoto and vocalist, Koshi Inaba. Over the span of 24 years, B’z have released 18 albums, and 50 singles, with 46 of those singles consecutively debuting #1 on Japan’s Oricon Single Chart. B’z have sold over 80 million CDs in Japan alone, making them the best-selling artist in Japan’s history.

“This will be our 4th US tour,” says Matsumoto. “We have always loved playing here, and felt it was time to release some English songs for the American audience.”

As a world acclaimed six-string virtuoso, Matsumoto joined legendary guitarists Jimmy Page, Joe Perry, Ace Frehley and Slash, to become the fifth guitarist in the world to have his own Gibson signature model guitar. Currently his model, the “Tak Matsumoto DC Custom Ebony” is available worldwide.

It’s been revealed that Mizuki Nana will be voice acting in the Japanese dubbed version of the film, ‘The Hunger Games‘.

The survival action film is based on Susan Collins‘ best-selling novel of the same title. Mizuki will voice the heroine Katniss, who volunteers to participate in the life-threatening game.

This will be Mizuki’s first time lending her voice for a lead role in a Hollywood film. “It’s a really wonderful film, so I did my best to liven up the story even more!” she expressed.

Mizuki also commented, “Katniss’ courage, wisdom, and quick-wittedness are manly, so the director advised me to ‘be more wild’.”

‘The Hunger Games’ will open in theaters across Japan on September 28th.

Matsui Sakiko from AKB48 will be making her solo debut as a pianist with the release of a classical album on October 3rd. Matsui is the only AKB48 member enrolled at a music college. She is currently a senior majoring in piano in the Department of Instrumental Music at Tokyo College of Music. She started playing the piano when she was four and has performed several times at AKB48’s concerts.

AKB48 has produced 5 soloists so far and Matsui will be the first to debut as a pianist. The supervisor for this album is Hattori Takayuki, who’s had a hand in the music for a number of TV drama series. Matsui’s album is comprised of 11 songs, including an original tune used for Nissin Cup Noodles’ CM, which Matsui and fellow AKB48 members also appeared in. The album also consists of piano arrangements of popular AKB48 melodies such as “Aitakkata”, “Heavy Rotation” and “Everyday, Kachuusha”.

Matsui expressed her aspirations to be like Matsushita Nao, an active actress and pianist, saying, “This is a happiness that I have never experienced. I would like to become a great pianist like Matsuhita Nao, who’s a senpai from my music college.”

Fans can look forward to being entranced by the melodies played by this first pianist from AKB48.

This “photo exhibition” will feature Maeda’s solo cuts that were used in magazines and other publications during her 7 years since she joined the group in 2005. A total of 150 posters will be displayed in 150 different areas of JR Akihabara Station.

‘Shuku! AKB48 Sotsugyou Kinen: Maeda Atsuko Poster-ten’ will open on August 24th, which is the first day of AKB48’s 3-day Tokyo Dome concert. It will run for 4 days until Maeda’s graduation on August 27th.

Acchan is one of those people you meet only a couple times in your lifetime.

Kame's voice is sooo sexy
this reminds me of their 2nd album tbh, the 2nd part of the song surprised me & i love it
i seriously can't wait for Koki's 'Black or White'

Be strong is track 5 on her upcoming album to be released Sept. 5

Good luck to TOKIO, ONE OK ROCK and FLOWER. And oh, I spot ACE OF SPADES! XD 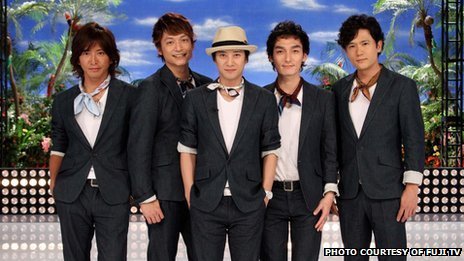 On Saturday the leader of one of Japan's most popular boy bands passes a key milestone - SMAP's Masahiro Nakai is turning 40.

To be fair Mr Nakai, who has been on Japan's screens and airwaves for two decades, doesn't look his age.

But he has certainly moved from the ranks of pop idol into all-round entertainment stalwart and icon.

He was also the main newscaster for the Olympic Games for Tokyo Broadcasting System Television (TBS), not only in London, but for the last four summer and winter games.

But it is as one-fifth of boy band SMAP that he is known above all. The group - whose four other members are also in their late 30s - are frequently seen in colourful costumes, singing pop songs on music programmes.

But the group stands out for maintaining top-level popularity for more than 20 years. So what's their secret?


Nice to see they even remember Nakai's birthday now, when just last year they were doing this ;P : 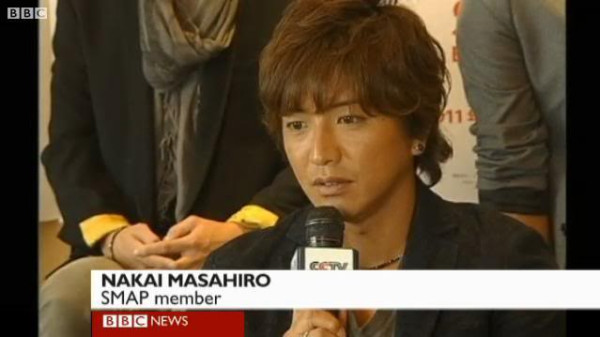 Several Japanese nationalists landed on Sunday on a rocky island in the East China Sea at the heart of a territorial row with Beijing, a move all but certain to fan anger in China and worsen ties between Asia's two biggest economies.

Tokyo and Beijing have been feuding for decades over the island chain, known as the Senkaku in Japan and the Diaoyu in China, near potentially huge maritime gas fields.

Tensions flared last week after seven of a group of 14 Chinese activists slipped past Japan's Coast Guard to land on one of the uninhabited isles and raise a Chinese flag.

Japan, keen to avoid a rerun of a nasty feud that chilled economic and diplomatic ties in 2010, deported the activists within days, but the dispute still rankles.

The renewed maritime tension with China has parallels with Beijing's other recent tangles with Southeast Asian countries over rival territorial claims in the South China Sea.

China's expanding naval reach has fed worries that it could brandish its military might to get its way.

Relations have long been plagued by China's bitter memories of Tokyo's past military occupation and Tokyo's concerns about Beijing's rising clout.