For decades, lonely women have been going to host clubs to be served by overly attentive men in a date-like setting. Shukan Jitsuwa (July 19), however, has found an entrepreneurial enterprise that has inverted the concept whereby “rental boyfriends” come to customers.

Osaka-based Eterna (エテルナ) allows ladies to select a man of their choice from its Web site. The agency will then send him to any location in Japan.

The hosts, who typically sport long hair and slick suits, are ranked according to popularity. Their height, weight, blood type, interests, and other basic information are provided.

“The majority of the customers are from the adult-entertainment industry, but now working professionals and housewives are showing interest,” says a newspaper reporter covering national news.

Basic fees begin at 6,000 yen per hour. Extended plans, which might include overnight trips, are also available at a rate of 40,000 yen for eight hours. Other expenses, such as transportation and dining costs, are to be borne by the lady.

Shukan Jitsuwa says that there are days where more than 30 reservations are made. The service has 33 men registered on its books, “including one who advanced to the finals of a handsome man competition,” says an individual affiliated with Eterna. “A woman can enjoy the feeling of having a date while dining or during a trip. Eterna means forever in Latin. As the agency’s name says, we want clients to enjoy soothing moments for an eternity.”

Naturally, the magazine assumes that sexual services are provided by the boy toys, but the agency prohibits such activities. Further, the establishment of a personal relationship with a customer is also not allowed.

The majority of the women are in their 30s and 40s. “One can become beautiful inside in a way that supersedes any available cosmetics,” says a customer.

Shukan Jitsuwa is a bit skeptical as a woman’s motivation for such a service.

“In this cold-cut society, women do not possess the skills nor the time to examine their eroticism,” says Jiro Harue, a researcher in anthropology. “There is no real reason to refuse an opportunity to rent out a good-looking man if it is available. This is especially true for those raised in the era of the convenience store.”

Harue goes on to say that female members of this generation have hormonal imbalances as a result of the nutrition they received while in the womb.

“Renting a partner by resorting to financial means is typically something men do,” says the researcher. “Women originally found excitement in being dominated. I know it is acceptable to have a wide range of businesses, but I feel a bit sad to see the tables turning.” (A.T.)

Nico Nico D@ance M@ster is an event for odorite (dancers), they are usually those who upload odotte mita on the site Nico Nico Douga. Odotte mita ("I tried dancing it"), is where users of NND do dance covers and upload the videos to the site. The event features the more popular dancers as they dance (and even sing) to popular songs.

Johnny’s Junior Jesse Lewis was chosen to play the lead role for the upcoming horror TV drama “The QUIZ“. A press conference was held last Aug 21st with fellow Johnnys’ Jr. Keigo Hagiya and Hikaru Iwamoto. Lewis, Hagiya, and Iwamoto will play as students from different Universities who will join the quiz show.

“The QUIZ” follows the story of a not-so-typical quiz show where 10 contestant will vie for the 100 million Yen prize. However, one contestant will be killed off with each question/round.

Lewis was full of enthusiasm when he attended the press conference, “I’m glad that I was chosen for the lead role, I hope to prove to everyone that I can handle this type of roles.”

Lewis previously starred in “Shiritsu Bakaleya” with his fellow Johnny’s Jr. talents and he is currently working with Hey!Say!JUMP‘s Yuri Chinen for “Sprout“.

The three Johnny’s Jr. were asked what they would do if they won the 100 million Yen prize in the fictional quiz show.

“I would have a cinema theater built inside our house and watch DVD's with my family,” Lewis shared.

“I would have my room sound-proof and a drum set and karaoke machine,” Hagiya said.

Lastly, Iwamoto said that he’ll use his designing hobby and build an apparel shop.

Maru is definitely the star for Aoppana! 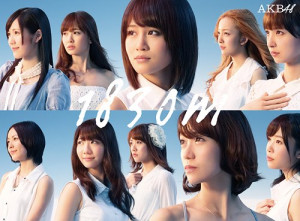 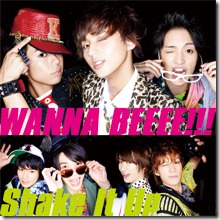 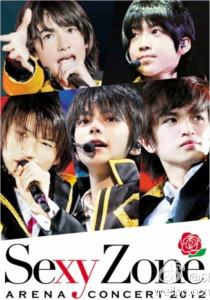 In the music-DVD chart, Johnny's group, Sexy Zone has achieved the no.1 spot with their first music-DVD, "Sexy Zone Arena Concert 2012." With the average age of 15.2 years old, they are the youngest male artists to have achieved this. Previously, the youngest male artist to reach the top spot were Hey!Say!JUMP with "Hey!Say!Jump-ing Tour '08-'09" (April 2009). The average age at that time was 16.8 years old. Sexy Zone's debut single in November last year, "Sexy Zone" also reached the top spot with an average age of 14.4 years old, making them the youngest no.1 male artists in CD singles sales. They have also topped the Blu-Ray chart with 9,182 copies sold, making the total of DVD+BD at 29,714 copies in the first week.

The Akabane Vulgars will be going on a tour titled "Return of the King Zero" in the United States.

"We're super excited to come back to America for this tour. Each of us in the band has grown up steeped in American music and rock and roll, and it's going to be so much fun to play for new audiences in these cities. We look forward to making as many new fans as we can!" singer Yumi Uchizono stated.

The Akabane Vulgars will also be busy preparing to record and release their first full length album on a U.S.-based record label later this year.

In addition to holding their first live performance overseas, they will be releasing their singles(Fallin Love, Lovers, Bye Bye, & Sweet Drive) including B-sides & instrumental tracks  in 19 countries

The artist's all tracks in 4 singles including new single "Sweet Drive" will be available for
International digital downloading (i-Tunes / Amazon) in19 countries Aug.21

ALSO
★ 7!! "Sweet Drive" VEVO channel «7!! VEVO»
http://www.youtube.com/SevenOopsVEVO
(※ is currently available for viewing in Japan, other than the United States of America)
Now available to watch 7!! Music videos on VEVO!
(We are sorry, but 7!! VEVO is currently only available in the countries besides Japan and the US)


Lastly Seven Oops will be performing their latest single on Music Japan Annex this Friay(Aug. 24)
Others who will join them-

It’s been reported that AKB48’s Maeda Atsuko parade through Akihabara scheduled for August 27th has been canceled.

The Olympics Medalist Parade was recently held in Ginza on August 20th attracting about 500,000 people to the event. As the police expected a large population to also gather at Maeda’s parade, they received instructions for cancellation due to security concerns.

Although the parade has been canceled, Maeda’s graduation concert will be held at AKB48 Theater as planned. This concert will broadcast live on Fuji TV’s ‘HEY!HEY!HEY!‘ as well as on AKB48’s Google+ and YouTube accounts.

Ah I'm excited, I hope they do Namida Surprise on that cake.

BANDO JA NAINON! was formed at the start of 2011 and made their debut with a live performance at the GARDEN in Shimokitazawa, Tokyo in February of the same year. The girls went on to perform at various events and have gradually attracted more and more fans with their unique "Twin Drums & Twin Girls" performance style.

Their grand debut CD BANDO JA NAIMON! to be released on October 3 will feature 7 songs, including 6 originals written by a team of songwriters such as HYADAIN (Kenichi Maeyamada) producing the lead track Pahipahi, Tomei Sounds (loco2kit + Konnie Aoki), Minami Tomoya, Yoshino Yoshikawa, and TSUTCHIE (SHAKKAZOMBIE), as well as the band's cover of Body dake lady, the opening theme song of anime "Kiteretsu Encyclopedia."

The band's official site that opened with the announcement of their grand debut will provide updates of future live performance schedules and other information. In addition, the band's self-introduction video showing the two excited girls talking is available on Warner's official YouTube site. BANDO JA NAIMON! will be performing at 4 events in August, which are the TOKYO IDOL FESTIVAL 2012, the NIIGATA IDOL SUMMIT 2012 Summer Festival Vol. 1, the MOSHIWAKENAITO@NIIGATA ~J-POP DJ MIX WIDESHOW~, and the PARCO SUMMER SCHOOL 2012 ~GIRL ROOM~, as well as the September 1 live event THE NANBA SHOW SOTO SHOGEKITEKINA SCHOOL POP!! Vol. 5 organized by Shiho Nanba herself. Go check them out at these events if you are interested!

so what do you guys think?