A week ago, a university student in Kanazawa accidentally left his iPad in a supermarket. When he went back to retrieve it, it was gone. Somebody had stolen it.

Luckily, the student was tech savvy and the thief was not. The iPad’s GPS feature was on, so the student was able to track its physical location. He called the police, who entered the home, found the stolen iPad, and arrested the 64-year-old man who had taken it.

The man acknowledged his guilt, saying that he had “wanted to look at the insides” of the electronic device. For a short period, he was also able to use the iPad, but was apparently blocked from using it further after locks were enabled.

it'd be awesome if every theif was caught. but just wow to technology
now if only i knew how to use it better....

The manga version will start with the story’s hero recalling childhood memories of his best friend who became different from him.

To celebrate the first run of “Pink to Gray” in ASUKA, a short interview of Kato is included. Kato talks about his memories while writing the novel and his impressions with Komikiraizu’s work.

On Aug 31st, 34 days since Kanjani8‘s 8th year anniversary movie “EIGHT RANGER” was shown in cinemas, it was able to breakthrough 880,000 cinema-goers.

Directed by Yukihiko Tsutsumi, “EIGHT RANGER” was originally a skit performed during Kanjani8′s concerts. When it opened in last July 28th at 155 cinemas nationwide, the movie was able to attract 122,160 movie-goers that earned them JPY 157,836,200 million in box office proceeds during the weekend opening.

The movie was able to attract more audience during the “Ladies Day” weekdays, and while most movie-goers are females, parents and children can also be seen since the movie is a hero-themed. Furthermore, it was regarded as a summer vacation movie so it was able to attract different age range.

To commemorate the immobilization of 880,000 audience, fans can get their EIGHT RANGER emoji/pictograms until Sept 28th. The emojis are for FREE and can be downloaded to any smartphones via EIGHT RANGER official movie site.

The emoji feature each ranger with “BLACK who decides action splendidly”, “RED drinks a beer”, “VIOLET with his sparkling vampire tooth” , “ORANGE says ‘yas san’ ” , “BLUE lovey-dovey blue” , “YELLOW sings 1 FOR ALL, ALL FOR 1″ , and “GREEN respectfully walks with the dog Don Saigou”.

next year would see a string of Johnny movies released one after the other, good thing a lot looks VERY interesting

Prior to the release of “Yokai Ningen Bem” which stars KAT-TUN‘s Kamenashi Kazuya this December, Kamenashi together with Fuku Suzuki and Anne, have been illustrated for “SD” or Super Deformation by yukky. yukky has been known for his works in “Aisatsu no Mahou” and “popopopon” who said it was an honor to draw supernatural creatures of the movie.

“It was lovely,” yukky said after the illustrations was unveiled. He said that he deformed the characters while retaining the delicate features of each of them, such as the sexiness of Bemu, the anger in Bela, and the cuteness of Belo. Despite the scary illustrations, yukky was able to expressed the feelings of sorrow and sadness with each character illustration.

Hidehiro Kono, Yokai Ningen Bem producer, was the one who commissioned yukky to draw the characters. Kamenashi reportedly “laughed so hard until his eyes becomes misty with tears” and asks, “are my eyes really shiny like this?” upon seeing his SD counterpart.

“Yokai Ningen Bem” will hit the theaters on Dec. 15th

I don't really think there's a part 2. Filming already ended, giving Kame a few days for DBS rehearsal w/ KT stuff in between. I just hope he doesn't become a walking zombie before the year ends. IDKY, but I'm doubly excited for the Ore Ore movie.

Source
Well, I don't know why SeungRi would imitate Acchan crying at the end of Heavy Rotation. Its just distasteful of him to do that, especially if he know Acchan cried because of her graduating. Tbh I still don't know why would he do that. 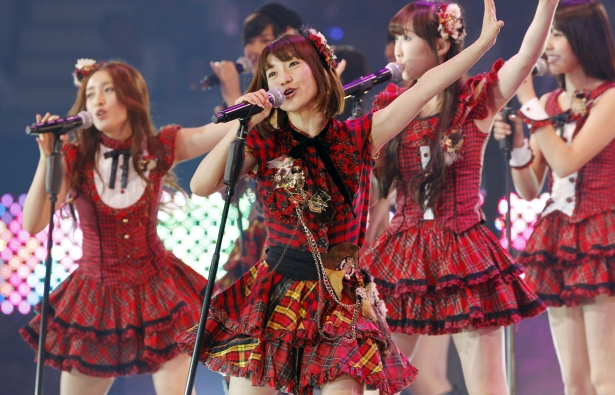 The 48-member Japanese girl-pop behemoth known as AKB48 will soon pass a big milestone in its already-huge career: performing three sold-out shows from Aug. 24 to Aug. 26 at the Tokyo Dome, the country's largest concert venue. But the coronation—further cementing the band's reputation as Japan's most successful pop export in Asia—also comes with a black eye.

Barring a reversal of fortune or clever marketing stunt, Rino Sashihara, a 19-year-old singer who's been involved with AKB48 since 2007, won't be part of the Tokyo Dome performance. Earlier this summer, a man claiming to be her ex-boyfriend approached popular Japanese tabloid newspaper Shukan Bunshun with half-naked photos of the pop star and lurid details of their supposed relationship. Sashihara, one of the group's most popular members, denied his allegations, but the damage had been done. She was removed from AKB48 and transferred to far-less-celebrated sister group HKT48 based on the other side of the country. 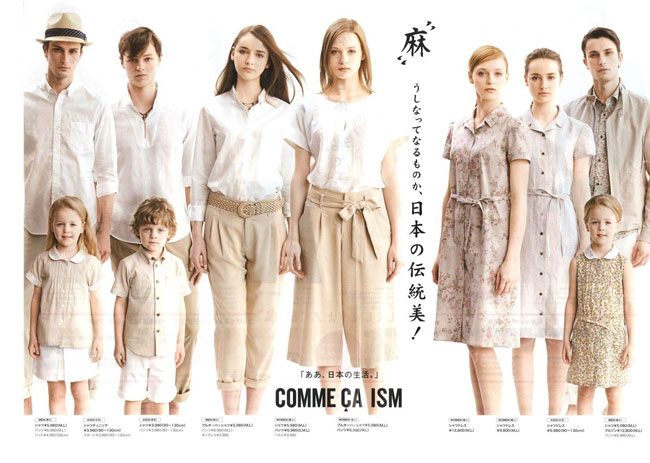 Japan is a homogenous country to be sure, but a recent advertisement from clothing chain COMME ÇA ISM boldly challenges this mistaken stereotype that Japan is full of Japanese people.

It all makes sense if you think about it. The business’ name is COMME ÇA ISM. Does that sound Asian to you? Not to mention a store would have to be crazy to run an ad featuring only white people to a nation full of Asian people – right?

The caption on the ad reads, “We should never lose Japan’s beautiful tradition, hemp clothing!” and at the bottom “Yes, Japanese Life.” Clearly, these statements describe the true nature of Japanese tradition and life – brooding Caucasian people with hemp.

Okay, clearly this is either some sort of ironic campaign, that few of us can understand, or perhaps, this is just a unfortunate juxtaposition as COMME ÇA ISM is well known for using white people in their ads.

KARA Collection is not there, but I'm sure it's because Oricon sent out the survey earlier than the mini album release announcement. But of course, rooting for Kobukuro and Kana all the way! It'd be great if Kobukuro's album can get another million but realistically, it might be a bit too much to ask in this age of theirs.

And go go go Eito! (Though I personally thought the NINKI is a bit too high since I don't think this single will sell much but who knows lol). Also all the best to EXILE TRIBE, YUI, abingdon boys school, and THE RiCECOOKERS! XD 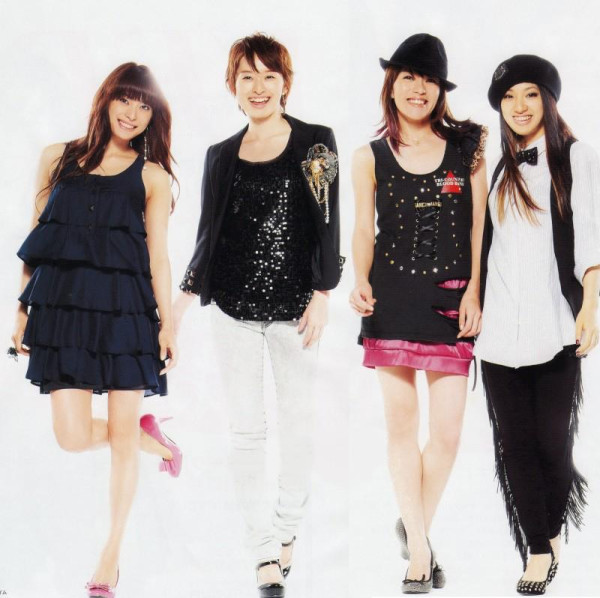 SPEED have announced that their new studio album will be called '4Colors'.

'4Colors' is the first studio album since SPEED came back on 2008 and will include 13 tracks, 6 songs originally released as singles, an album version of "PRIDE" plus 6 new songs.

"CANDY GIRLS!" PV was made just for the Zoobles DVD release.

Located in Otaroad, the mecca of Otaku in Osaka

We often see under-aged maid girls who serve their masters in Japanese anime and manga. But in reality, it's absolutely and unequivocally illegal even in Japan. On September 1, Naniwa station of Osaka prefectural police arrested a 61-year-old man who was the owner of "Maidream", a maid cafe in Naniwa Ward, Osaka, for employing three 14-year-old junior high school girls. The suspect employed the girls who were all 14-year-old at the time to entertain "the masters" as maids at his maid cafe "Maidream" on May 26, even though he knew they were under 15 (the Labor Standards Act in Japan prohibits to employ a child under 15 years of age). The girls who attended the same junior high school worked at the cafe for the one day only. But a teacher who was in charge of student guidance at their school immediately found out the fact and reported to the local police station three days later. The suspect has admitted his guilt.

"Maidream" is located in Otaroad, a street in Nipponbashi shopping district of Naniwa Ward, Osaka.
As the name shows, it is often called Osaka's equivalent of Akihabara. There are more than fifty
maid-themed cafes and restaurants in the area. "Maidream" has been infamous for its over-charged
service and foods, such as a 4,000 yen (about US$51.00) omelet rice or a 5,000 yen (US$63.83) cake set. 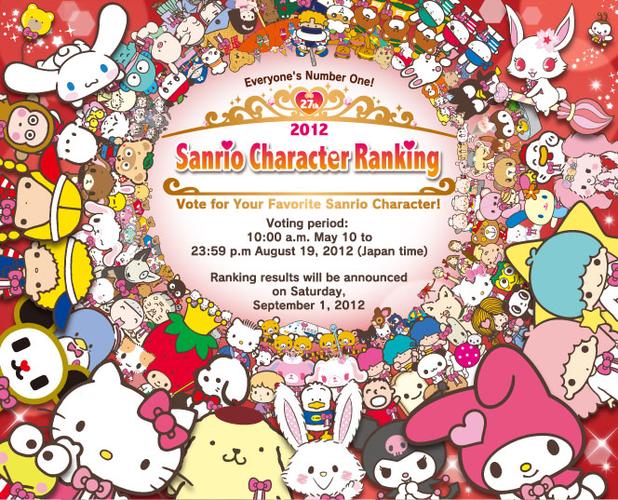 On September 1st, Sanrio, home of some of the cutest characters, released the results of the 27th annual Sanrio Character Ranking. The voting period ran from May 10th to August 19th, 2012. There were a grand total of 1,500,234 votes. It should be noted that this year's contest was more promoted than the previous year as far as online is concerned. I did the top 60, numbers 61 to 100 can be seen at the source.

Sanrio left this comment on the event site:
"Occurrences of mass automated voting have been detected among the votes submitted from overseas. These votes were judged to have exceeded the permissible range and were deleted.
We ask everyone for their kind understanding in this matter."
The number in the bracket indicates their placing last year, that can be seen here.