The first PV for “Yami Yami” was directed by Yamaguchi Takashi and features a cute and eerie animation of a girl and a ghost drawn by Yakushimaru herself. The other PV is titled “Lonely Planet (Post A)” and is one of the five different PVs that are included on the DVD of her latest single. This PV was made by the design studio ‘rhizomatiks‘ that also include the popular artist and designer Manabe Daito. It features various appearing and disappearing light particles.

all the awards <3 she needs more love tho :(

kinda cute, my theory still rings true that Japanese to English songs are too wordy, like too many lyrics idk


lol her boobs are kinda big,but I love that her robot thing has butterflies wings

NEW YORK — South Korean Foreign Minister Kim Sung Hwan said in media interviews Thursday that Japan should educate its people about its wartime past if it is to have good relations with its neighbors.

In an interview with The Associated Press on the sidelines of the assembly meeting, Kim explained Thursday why his people are so irate over Japan's claims to the pair of South Korean-controlled islets known as Dokdo in South Korea and Takeshima in Japan, saying, "We are victims of Japanese colonial rule."

That SK Minister got a point. Japan should teach their people about their "dark past" correctly and earnestly. A good apology is incomplete without admitting what exactly you did wrong. Though the rumor has it that it's kinda more complicated than it looks like... :3

( Collapse )
Looks like it's going to be a slow week next week. 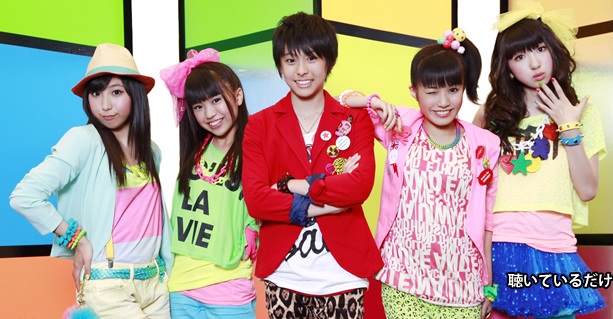 Recently, it was announced that Dream5 will release their 8th single (4th single for the year), 'Shekimeki'. It is set to be released on November 7th. The titular track, 'Shekimeki', has a CM tie up with brand, Ito-Yokado's 'Dancingood day' line.

The B-side is a cover of TRF's 'CRAZY GONNA CRAZY', while the C-side, 'Rock n Roll Kenchousozaichi' is a cover of the Moritaka Chisato song of the same name.

There are 2 versions of the release, a CD only version, and a CD + DVD version. Please look at the tracklist below and PVs below.

They're just too cute.

EXIT TUNES will once again be releasing a new compilation album. This one falls under their Ikemen Voice Paradise series. It will also be released on October 17th. As following with Ikemen Voice Paradise 1 through 4, this album will contain utaite, as well as utaite collaborations. The illustration is done by pixiv artist, MACCO. The release also comes with goodies such as: