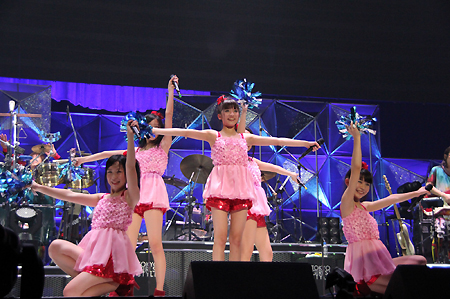 During the live, the members’ ages that were not open to public until now, were revealed. The members’ ages are as follows; the leader Yamabe Miyu is 16 Konishi Ayano is 15 Arai Hitomi is 14 Nakae Yuri is 15, an Shoji Mei is 15. Along with this surprise announcement, it was also announced that the group has become the youngest female group to hold a live concert at Nippon Budokan.

When the members thanked the audience of 6,500, they gave a glad shout for the girls.

The live started with “Limited addiction -Unlimited addiction Mirrorball Royal Mix-“, followed by several up-tempo tracks inclduing: “Discord“, “LolitA☆Strawberry in summer“, and “Bad Flower.” Then the girls performed popular tracks, “Kodou no Himitsu“, “Himawari to Hoshikuzu“, “Liar“, “Rock you!“, “Onnaji Kimochi“, and “Sparkle.” They also performed, “Futarikiri“, “Yakusoku“, and “Tsuki to Sayounara” which would be included in their upcoming 3rd album “Yakusoku” (to be released on January 30th), for the first time.

After the performance of “Attack Hyper Beat POP” as the last song, the members ran around the stage, and greeted the audience.

The official website for the anime adaptation of Otomate's female-oriented video game Amnesia began streaming the first promotional video with animated footage on Friday. The video features the opening theme song "Zoetrope" by Nagi Yanagi (Jormungand, Waiting in the Summer). (Ray performs the ending theme "Recall" after contributing to Waiting in the Summer and To Love-Ru -Trouble- Darkness.)

The story of the original romance game begins on the morning of August 1, when the heroine wakes up and discovers she has absolutely no memories of the past. A boy appears before her, and he introduces himself as a "spirit" named Orion. The heroine struggles to regain her memories under the guidance of Orion. She then gets a phone call, but she does not recognize the name on her mobile phone screen. She meets her apparent "boyfriend," despite not knowing his face.

MERRY KURISUMASU
Ayumi Hamasaki will be releasing her 14th studio album on February 8 as a part of her 5 consecutive releases in her 15th anniv. project. This album follows two mini albums and her classical album A:Classical set to drop Jan.8 and will come in 5 different versions with 14 tracks.

It'll be released with the following versions, all already up for pre-order at your regular shops and sites: 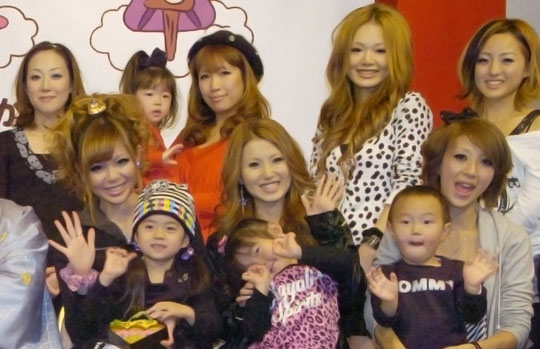 Switching to mama mode is not easy for today's gals

Bad news on the kekkon sensen (結婚戦線, marriage front) — hardly anyone's doing it. According to a government survey, more than 60 percent of single men and close to 50 percent of single women are not in relationships, nor are they particularly interested in dating. At this rate, Japan's already dwindling birth rate is expected to drop another couple of notches, accelerating the trend of chōkōreika shakai (超高齢化社会, super-senior society).

It's not that people don't want marriage, it's more that they don't want to wind up like their parents. For women, it's a familiar feeling. The more I talk to my single friends, the more I hear the phrase: "Jibun no hahaoya no yōni dakewa naritakunai" (「自分の母親のようにだけはなりたくない」"Anything is better than being like my mother"). And who can blame them? If they were smart, the legion of Nihon no okāsan (日本のお母さん, Japanese mothers) would have formed a union decades ago. Even a casual glance at a Japanese mother's job description reveals its thankless, long-suffering, utter doormat nature. A time-worn phrase goes like this: "Onna wa sangai ni ie nashi" (「女は三界に家なし」"In three worlds, a woman has no home"). Meaning that when she is young, she must abide by the law of her parent's household; after marriage, she's under the thumb of her husband and mother-in-law; finally in late middle age, she enters the household of her eldest son and must obey his wishes. By that time her elderly in-laws are in need of kaigo (介護, care and aid) which as the okāsan, she's expected to provide. "Bummer" doesn't begin to describe the life and times of a Japanese mother.

so, what, do they need to back to the old ways just so the marriage and birth rate becomes high again.... or....