As reported, Arashi was the host of NHK Kohaku Uta Gassen for the third year in a row.  They also ranked in the top of 2012 CM income rankings with 12 CMs for Sakurai Sho, 10 CMs for Matsumoto Jun, Kazunari Ninomiya, Masaki Aiba and 9 CMs for Ohno Satoshi.  ARASHI LIVE TOUR Beautiful World sold 714,000 copies amount to 4.09 billion yen and became the top music DVD in Oricon sales ranking for 2012.

Then why are they only earning an average of 24 million yen a year?  A certain well-informed person exposes the trick on condition of absolute anonymity.  According to this person, it is called Johnny's welfare system which will guarantee performance fee payments to Johnny's talents with high interest rate of 5%.  And only a handful of Johnny's talents can meet the condition to receive this treatment.  He has heard that it is restricted to people of annual sales of 100 million yen or more only.  And the people who met this condition are:  Arashi, Kanjani8, TOKIO, Kinki Kids and Yamashita Tomohisa.  SMAP is not included in this line up.  SMAP is an exception because all of SMAP incomes are going through SMAP's Chief Manager, Ms. Iijima. Only SMAP is the exception  (the above-mentioned well-informed person).  As a result, a gap arises between annual incomes of other Johnny's talents and SMAP members like Masahiro Nakai who makes 600 - 700 million yen a year and  Kimura Takuya  who makes 500 - 600 million yen a year.

Why has Johnny adopted such a welfare system ?  It would become a remarkable burden with the 5% of high interest rate.  The reason is Johnny does not retire his talents.  It's possible for them to pay the talents in tens of million yen a year during the span of their careers.  It is said that a great number of talents will slack off of work, or not carrying out their workloads if hundreds of millions of yen performance fee is suddenly given for an annual income.  He has heard that it is a plan of President Johnny Kitagawa who also got this from experience  (the well-informed person above).  However, it is said that  those qualified Johnny's talents will receive payments in hundreds of million yen once they return to private life or when cash becomes necessary suddenly for marriage or a family.
[Tokyo Sports]

I don't know how reliable this is since it's from Tokyo Sports..

A renowned composer of scores for many cinematic and TV drama series in Japan, Teruyuki Nobuchika presents his premiere live performance in Singapore, featuring selections from his solo albums as well as well-loved repertoire from soundtrack compositions. While Nobuchika is most known for his compositions for TV drama series includin Vacation (Kyuka) 2007),Yankee Kun to Megane Chan 2010),School!! 2011) Natsu no Koi wa Nijiiro ni Kagayaku 2010) Buzzer Beat 2009), andCHANGE 2008), his personal albums reveal a more experimental side to his music.

With reviews stating him as a peer to pianists such as Goldmund, Johann Johannsson, and Hauschka, Nobuchika's performance at the Fringe is bound to bring audiences through an emotional, evocative sonic journey.

THIS MAY INSPIRE AURAL-GASMS. YOU WERE WARNED

Will £7-an-hour cuddles and soft drinks catch on as life makes it less practical to keep pets? 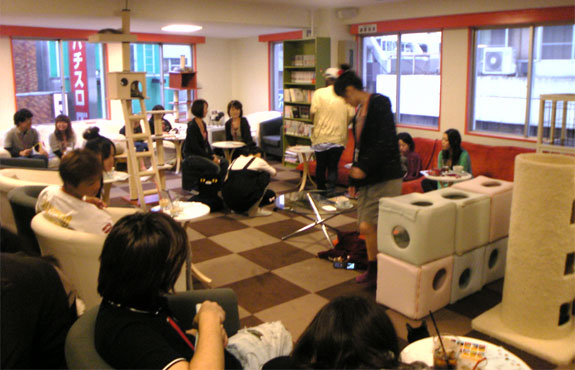 Airu is a slinky minx with perky features and big green eyes. Normally, for the price of a good sandwich, she will come padding over and wait to be stroked, but today she’s being standoffish. Frankly – according to her profile – she’s more popular with people than cats, but at least she’s not drinking water from the sink, which is one of her favourite pastimes.

Every day dozens of people pay about £7-per-hour to sip soft drinks and cuddle Airu, one of 11 cats at the Caterium café in West Tokyo. Each has its own profile and photograph on a board which lists their personalities and hobbies. Some even have twitter accounts and DVDs. A shrine with photos and messages from well-wishing fans has been constructed for a moggie that passed away last year. “She was very popular,” laments owner Yuki Shigemuri.

Once considered a mainly Japanese phenomenon, cat cafes are spreading to Europe, with one each in Austria and St Petersburg and more planned elsewhere. In London, an entrepreneur is trying to raise £108,000 via crowd-funding to set up Lady Dinah’s Cat Emporium. “I think Brits will take to it,” founder Lauren Pears told The Independent. “Lots of people live in small flats or their working lives make it impractical to keep pets.”

Residents of Tokyo, home to about 40 cat-themed cafes, have lived with those restrictions for years, points out Shigeru Onozaki, a real estate agent who dropped by the Caterium on his day off. “Our image of the UK is that people have big homes and always keep pets,” he says as a cat stretches out into a shoebox near his head. “In Tokyo, about half of all real-estate agents ban pets.” Many people are, in any case, too busy to keep them, he adds. “I rarely get home till after 8pm. A cat would starve.”

Cat-themed cafes began in Taiwan and took off a decade ago in Japan’s crowded cities, where apartments are often too cramped for pets, even when landlords allow them. Today, there are about 160 throughout Japan, along with hundreds of shops that rent dogs and other pets out for hourly rates.

Sociologists believe the cats fill a void in an ageing country with too few children - Japan’s population fell last year by 264,000, its largest drop in decades. But Mr Shigemuri says his customers come in all shapes and sizes.

“We do get quite a few lonely-looking women, but we are also popular with children and dating couples. Sometimes salary-men drop in on the way home from work for a cuddle.” A former counsellor for bereaved pet-owners, Mr Shigemuri says stroking cats is a stress-reliever for many people. “Cats are quiet, pliant and clean – a lot easier to maintain than dogs, which you have to walk and look after. They calm you down.”

The cats themselves, stuck indoors and pampered by a string of adoring customers, can be sensitive; after the March 2011 earthquake and tsunami, Mr Shigemuri says they stayed cowering in a corner for days. (source)

Tackey & Tsubasa‘s Hideaki Takizawa appeared for a dress rehearsal for “Johnny’s World”
last New Year’s Eve at Marunouchi, Tokyo. Takizawa will do a special
performance for the said play where the rehearsals have been open for
reporters. Takizawa was last seen onstage with “Shinshun Jinsei Kakumei” where he starred with the late Mori Mitsuko who died last November.

Tackey & Tsubasa celebrated their 10th year anniversary last
2012, which was also the year when Takizawa turned 30 years old. The
reporters, who were interested with Takizawa’s private life, asked him
questions, like “when will be hearing a good news[marriage] soon?” to
which Takizawa responded, “there are no plans yet, but the desire is
there…”

When it comes to matters of love life, Takizawa is being given Laissez-faire or let-alone policy by Johnny Kitagawa.
“He has the freedom to do what he wished, he deserves it.” Kitagawa has
full trust and confidence to Takizawa as compared to Jin Akanishi, whom
Kitagawa imposed harsh measures, after Akanishi failed to inform
Kitagawa about his marriage beforehand.

About Takizawa succeeding Johnny’s drive when it comes to producing
stage performances since Takizawa himself is an “idea man”. “I hope to
play the role of manager if I can’t become a film director in the
future,” Takizawa related. Johnny responded that he won’t interfere with
Takizawa so he could concentrate with behind-the-scenes events.
Creating “Tackey’s World” may indeed happen in the near future.

Takki, the eternal Johnny's favorite and what about "Tackey's World"?!

With the myriad of cosplay costumes available in Japan, first-time cosplayers must be overwhelmed with all the choices. Luckily, Cospa, a major cosplay costume company in Japan, has narrowed down the choices, releasing the 2012 costume sales rankings. Coming in at number one is everyone’s favorite vocaloid, Hatsune Miku.

Check out the rest of the top ten cosplay costumes of the year:

Idol group Momoiro Clover Z just made their long-cherished dream come true by appearing on NHK Kohaku Uta Gassen, appeared on “momocloTV” via Ustream which aired on January 1st starting on 8:10 am. During the show, the group revealed that their new goal would be to hold a live concert at the National Olympic Stadium.

On December 27th, Momoclo posted a banner on their official site that said “Big announcement on the New Year’s day” which caused an uproar among the fans, and also the girls appeared on the rehearsal for Kohaku wearing red T-shirts that said “Celebration • First appearance on Kohaku Uta Gassen, and now…” on its front, and “35.678067，139.714894″ on its back. With a hint given by a person concerned, it became clear that the mysterious numbers were the longitude and latitude for the stadium.