Miki Dezaki, who first arrived in Japan on a teacher exchange program in 2007, wanted to learn about the nation that his parents had once called home.

He taught English, explored the country and affectionately chronicled his cross-cultural adventures on social media, most recently on YouTube, where he gained a small following for videos like “Hitchhiking Okinawa” and the truly cringe-worthy “What Americans think of Japan.” One of them, on the experience of being gay in Japan, attracted 75,000 views and dozens of thoughtful comments.

Dezaki didn’t think the reaction to his latest video was going to be any different, but he was wrong. “If I should have anticipated something, I should have anticipated the Net ‘uyoku’ (rightwingers),” he said, referring to the informal army of young, hyper-nationalist Japanese Web users who tend to descend on any article — or person — they perceive as critical of Japan.

But before the Net uyoku put Dezaki in their cross hairs, sending him death threats and hounding his employers, previous employers and even the local politicians who oversee his employers, there was just a teacher and his students. 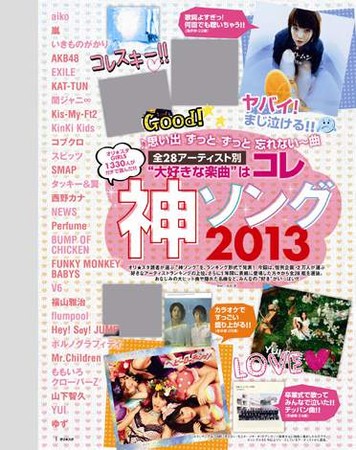 
( Collapse )
Note : Oricon annouce ranking TOP10 on their magazine but they  just revealed  TOP3 on their website .I found some full ranking   TOP10  because of fanclub

Some rankings make me surprised XD
Oh ,Misuchiru ,where's Innocent world !! ??..and why 's Tenohira on there !? ,lol 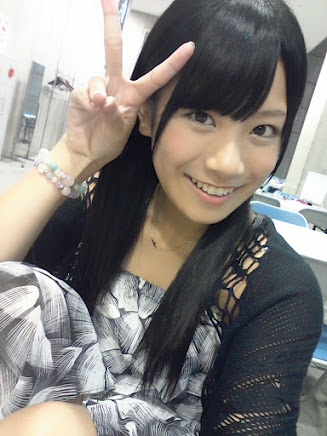 At NMB48 Team N's stage show today (on the 23rd of February 2013), Team N member Fukumoto Aina announced her graduation.
She is set to graduate from the group in June 2013 but an actual date has not been fixed yet.


Regarding her own graduation, here is a translation Ainyan's comment:

"I, Fukumoto Aina, will graduate from NMB48.
I'm sorry for surprising everyone with this sudden announcement.
I made by decision whether to graduate or not after thinking it over and over and over it again.
I thought about it really thoroughly before coming to the conclusion of graduating.
NMB48 has been formed about 2 years and 5 months ago.
Since then, we have been really blessed.
In less than a year, we were given regular TV shows and radio shows in the Kansai area.

Personally, my aim for the future is to become a variety talent.
Each and every opportunity has been important to me.
All the talents who gave me the chance to appear with them, they all taught me new things in different ways.
Thanks to everyone who supported me last year, I was able to rank in the senbatsu elections.
My chances to appear on shows increased as well.
I thought I wanted to challenge myself even more.
So, I participated in the Osaka Marathon.
It was a year where I've grown a lot.
I felt accomplished everyday, and in the midst of that, I deeply thought about what my dreams are.
I want to take on the challenge of being a solo talent, and fully embrace my plans to increase my variety skills.
I want to start walking on the road to becoming a variety talent.
So, I've decided to stand on a new starting line again.
It was not something I decided on lightly.
I have no regrets in coming to the decision to graduate.
This graduation would mean I could take my first step towards my new dream.
I know that the road ahead won't be an easy one, but I'm ready for it.
That's why I will work even harder than now.
I will show you all that my dream will come true.
To all the fans, staff, family and friends who have supported me until now,
And all the members who I've spent everyday with and been with me until today,
I will give it my all to show an Aina that shines.
I'll be grateful if you'll watch over me with kind eyes.
I love NMB48.
From now on, please continue to support me."

Here is the video link of Ainyan (Fukumoto Aina) announcing her graduation:
http://v.youku.com/v_show/id_XNTE4MDY0MTA0.html

oh and the album is flawless, buy it now!

Bullying in Japan’s schools caught public attention in October 2011 when a 13 year old middle school boy from Otsu, Shiga prefecture, committed suicide after being bullied by his peers. The investigation brought to light the fact that bullying was a major social concern after all. More people sought for police involvement in the matter.

A new report released yesterday by the National Police Agency showed that the number of reported incidents of school bullying more than doubled to 260 in 2012 in comparison to the year before. It was also the highest in a span of 25 years. According to the report, 511 students have been arrested or taken into custody last year for bullying; that’s more than twice the number in 2011, which was 219. It also showed that of all those reported bullying, 384 were in middle school, 91 were in high school, 36 were in elementary school and 42 were girls. 126 cases are said to have a resulting injury, while 74 involved forms of bullying other than physical assault. 74% of the victims sought advice from parents, 35% from teachers, while 15% didn’t ask for help at all.

Only last week, a special commission on education reform led by Kaoru Kamata, a researcher at Waseda University, said a proposal containing measures to deal with the problem has already been finalized, and the same will be submitted to Prime Minister Shinzo Abe at the end of the month. One of the recommendations is that “moral education” be made a regular subject in school in the hopes of teaching students to be “emotionally and physically balanced.” It will also propose the establishment of an independent organization beyond the school system where victims have a venue to report bullying and get help. 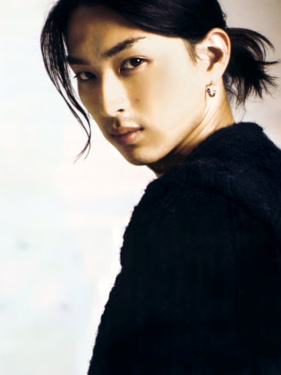 Matsuda Shota will be starring in the TBS spring 2013 drama "Sennyuu Tantei Tokage" (Undercover detective Tokage) which will begin its run from April in the Thursdays 9pm timeslot. The character Tokage is a famous detective but somewhat eccentric person who solved many tough cases but left the police force when his partner died while investigating a particular case. Soon after, he is asked to be an undercover cop by his previous employer i.e. the Metropolitan Police Department where he uses his strong memory to solve complicated cases for them. As a result of this, Matsuda has to take on different occupations and images in this drama e.g. politician's secretary, teacher and host while juggling action scenes. Co-stars include TOKIO's Matsuoka Masahiro who plays a police detective in the MPD and Tokage's assistant will be played by Renbutsu Misako.

ORICON STYLE recently asked 500 women who are in their teens, twenties, thirties and forties for which male celebrities they would want as a boyfriend, and the results are in!

This year, Arashi’s Sakurai Sho topped the ranking for the first time, and not only Sakurai, but all Arashi members ranked in TOP 10 which shows Arashi’s firm popularity once again.


Check out who ranked in TOP 10 below! (The number in the parenthesis is from the same ranking last year.)

You better don't watch other Youtube Videos with that song, they are full with comments of vkei ppl who are ~offended~ that she covered Hide's song this way. What do you think?

As reported by Shukan Shincho,

On February 12th, Meisa appeared in a press conference for ongoing Taiga drama “Yae no Sakura” at the NHK broadcasting center. This is her first comeback drama after she gave birth to her daughter back in September, and she’s been participating in the filming for the drama starting on Feb 7th.  Meisa plays an important role opposite Ayase Haruka's character.  However, it's not a leading role.  So to have a media coverage of her appearance on the Taiga drama is really exceptional for NHK.


Meisa was due to start filming the series last December but NHK had to adjust the schedule so she can get back into shape after gaining weight from her pregnancy.   Since she was on maternity leave, she had gone back to her parents' home in Okinawa and returned to Tokyo at the end of November.   There was no way she could start filming in early December.  NHK had requested for Meisa for this role since December of 2011 before her marriage to Jin in February 2012.   And with her pregnancy, they had to adjust the schedule for her.  Takeko Nakano is an important role in the taiga drama.  She commanded a group of fighters and she is an expert in using naginata.   There was a scene in which Yae shoots a gun in the boshin war by the 1st  broadcast, Takeko Nakano was also going to appear in this scene.   So NHK had to change the script partially for Meisa to appear.

It's just to show that athough Meisa's role is not a leading role,  NHK is willing to make a press conference to announce her appearance and changing the script for her.  There seems to be hardly any criticism against her.  So Meisa's future work is very favorable.


As for Jin, he has not had any work for a year since their shotgun marriage last February.   And Jin is free to do whatever he wants in his daily life.  Before their marriage,  Jin was shooting for the movie 47 ronin starring Keanu Reeves.  But the movie has been delayed until December 2013.  At the end of last year,  Jin, Yamapi and Ryo were photographed by tabloids FRIDAY and Shukan Josei at Jin's brother birthday party in a club.  Johnny's Office was angry at the reunion of Akanishi Troop which further lead to Jin not having any work.  Now, the gap of income between Meisa and Jin is a big difference, and the gap is spreading steadily.  But what important is the direction of their marital relationship,   It has been said that since Jin is free, he's spending lots of time with his family.   Jin and Meisa were seen going shopping all happy and lovey-dovey.   Not having any work creates an ideal situation for Jin to devote his time to his wife and baby.

People were surprised at the change in Jin when an entertainment insider overheard Jin at a cafe in Daikanyama praising how amazing Meisa is in Yae no Sakura.  And how Jin is pleased with Meisa's activities.  It is surprising to see Jin is not jealous of Meisa's career.  The "old" Jin would be jealous for sure.   Is Jin thinking of retiring from the entertainment industry? 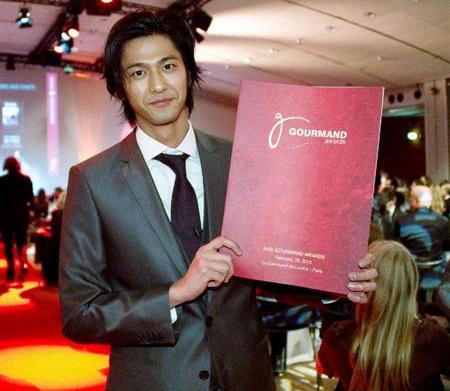 Hayami Mokomichi won the Gourmand World Cookbook Awards' Japanese cooking category with his cookbook "MOCO's Kitchen" and attended the prize-giving ceremony in Paris on 23 February. He has been hosting the cooking corner in NTV's morning programme "ZIP!" since 2011 on the weekdays and released 6 volumes of "MOCO's Kitchen" to date which has sold over 350,000 copies. The books contain the 500-odd recipes he demonstrated on the programme during this period. Hayami commented that although it was tough trying to come up with new ideas on what to cook every week, he was also encouraged by the anticipation and support viewers showed towards his programme. On the other hand, food researcher Matsumoto Sakafumi also won the Grand Prix in the single theme category with his book on how a Matsuzaka cow ends up on the dining table as sukiyaki.


The Gourmand World Cookbook Awards are established in 1995 and gives out awards in various categories such as recipes, wine, food photography. This year, there were 13,000 entries from 170 countries which took part.