At this time, the girls have revealed 3 different images. According to sources, these visuals “represent some kind of ‘evolution’.” The mystery behind their new visuals will be revealed through their special website soon.

Domino’s Pizza stepped things up a gear yesterday when it announced that it is partnering with digital pop idol Hatsune Miku for its latest promotional campaign. As well as allowing them to order pizzas without actually having to speak to anyone, the new Domino’s Pizza feat. Hatsune Miku app for iPhone lets customers enjoy private performances from the singing humanoid by pointing the iPhone’s camera at special app-friendly pizza boxes.

Perhaps even better than the campaign itself, though, is the cheesy video that Domino’s launched yesterday to introduce the app, which features company president Scott Oellkers doing his best to look excited about having his photo taken with the teal-haired star. Corporate enthusiasm aplenty after the break.

Been waiting for Rouge. Fuma and Taipi almost have the same swag lol.

I feel that this video chart is a good video for people to discover new songs. This uploader is uploading faithfully on a weekly basis so I thought I should share it here.

‘Kirishima, Bukatsu Yamerutteyo’ chosen as the Picture of the Year in the 36th Japan Academy Prize 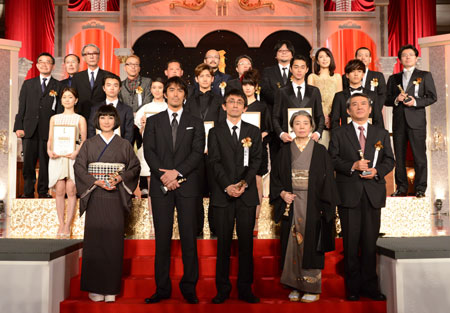 On March 8, the awarding ceremony for the “36th Japan Academy Prize” was held at Grand Prince Hotel New Takanawa, Tokyo, and Kamiki Ryunosuke’s starring movie “Kirishima, Bukatsu Yamerutteyo” was the big winner, being selected for the “Picture of the Year”, “Director of the Year”, and “Outstanding Achievement in Film Editing.”

The movie also received the popularity award (for the picture category), and Hashimoto Ai and Higashide Masahiro who both appeared in the film, have been chosen as two of the winners for the “Newcomer of the Year.”
The director of the film Yoshida Daihachi shared his delight, “Thank you. I’m really surprised at this since I never expected to receive this much. I was able to film it freely with the way I wanted, and first of all, I would like to thank the producer for that. Then the young actors, as well as the staff members who let those young actors have the place to work to their complete satisfaction. I feel gratitude toward all of them from bottom of my heart.”
When the announcement for the Picture of the Year was made, Hashimoto Ai shed tears, and said, “I’m happy to see the director’s joyful face.” Higashide who made his acting debut with the film, also said, “Kamiki-kun, the lead of this movie, could not attend today because of his work. It would have been great if all of us were here, but our hearts are one, so we will have a dinner party at my place later.”
“Kirishima, Bukatsu Yamerutteyo” is based on Asai Ryo’s award-winning novel of the same name, and the story starts where the most popular student at the school, and the captain of the school volleyball team, “Kirishima” suddenly quits the team. This news about Kirishima shocks the entire school, and it also causes distortion among students which brings a disruption of the hierarchy at the high school.
Check out other winners of the 36th Japan Academy Prize, and the photos from the awarding ceremony below. (Photos at the source)
( Read more...Collapse )
Sources: Tokyohive | Mantan Web | Japan Academy Prize Association
---
Congratulations to all the winners! YAAY Kirishima!!! It really is an awesome movie. Hopefully, someone will sub it soon. ^^

Enews24 Korea has reported that Kyary Pamyu Pamyu's S. Korea leg of her 100% KPP World Tour 2013 scheduled for March 10 had been cancelled.


According to the same media, Kyary was scheduled to perform a concert at Seoul UNIQLO ax this month.  But it was abruptly cancelled two weeks ago for reasons not disclosed. Because the cancellation took place before tickets go on sale, there was no refund issued.


According to people familiar with the matter, the cancellation was the result of the uproar caused by the "Rising Sun flag" Kyary posted on Twitter on December 31, 2012.  It was a picture of her as the sunrise image with the message "Happy New Year" on New Year's Day this year. It came across as "reminiscent of the Rising Sun flag" that Korean netizens  were hotly debating about.  After some initial backlash, the photos were removed from her account. However, by that point the damage was already done and words had quickly spread through Korean forums. This comes months after she gained positive feedback from Korean fans regarding the incident with K-pop group T-ARA.  Kyary Pamyu Pamyu posted several tweets that appeared to admonish the group for bullying fellow member Hwa Young and eventually causing her to leave.