Street Fighter: Legacy director and writer Joey Ansah launched a Kickstarter campaign on Monday for his live-action Street Fighter Assassin's Fist series that is currently in development. Ansah, who co-wrote the script for the new series with Christian Howard, is working to raise £625,000 (US$950,000) via the crowd-funding service. The Kickstarter campaign will end on May 3.

Ansah explained on the Kickstarter page that originally he had not intended on asking fans to help support the series' budget. He added that he has secured some independent funding for the series, but not enough to cover the entire production budget.

The series will be set in Japan and will explore the history of Ken, Ryu, Gōken, Gōki/Akuma and Gōtetsu. The scripts for the series are completed, but filming on the series has not yet started. Ansah notes that the staff already has the principal members cast, and also been working on special effects for the series. Ansah and Howard confirmed that actor Togo Igawa (The Last Samurai, 47 Ronin) has been cast in the series.

Jacqueline Quella, who also produced Street Fighter: Legacy, is producing the series. The staff are aiming for a winter 2013 release of the project.

Niji is the theme song for TBS drama Sennyu Tantei Tokage, starring Matsuda Shota, Matsuoka Masahiro and Renbutsu Misako.
The drama will air on April 18
The single will be released May 19

looks good so far
SMAPxSMAP's 2.5 hour long special that aired on 8th April was reported to have achieved average ratings of 20% in the Kanto region and 24.8% in the Kansai region.

During yesterday's special, footage of SMAP's 5-person only vacation to Osaka was aired. As the concept of the trip was for it to be a "private" vacation for SMAP, the members were asked to settle their own transport, book their own lodging, request for filming permission and do everything together, all while unmanned cameras were inconspicuously filming.

A highlight of yesterday's show: Nakai suddenly crying during karaoke


Excerpt from the last scene of the clip
Nakai: If it's a 100 people, I could handle them myself.
Shingo: Eh?
Nakai: Even if 10 people came charging right now, I would protect SMAP no matter what.
Shingo: What? If 10 people came charging right now, for SMAP...
Nakai: I would be able to protect SMAP, no problem at all.
Shingo: What's that? What's with all this love?
Nakai: Right to the very end. 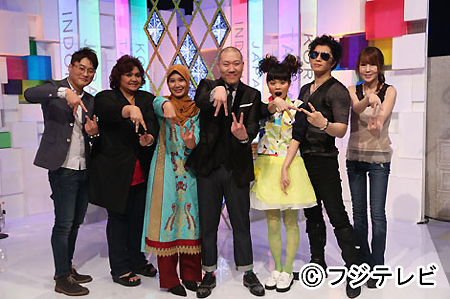 The program aims to find talented rookie artists from Asia through video sites such as YouTube.

Every week, two finalists will be chosen among eight artists who pass the primary examination, and they will perform at the studio. Then one will be picked as the weekly champion, and the program will produce the songs for the winner.

The MC of the program will be music producer Jeff Miyahara who has worked with artists like Amuro Namie, Nishino Kana, JUJU, and Kato Miliyah. He said enthusiastically, “I want to show the world how amazing Asian music is.”

The program will also be aired in Taiwan (FTV), Korea (KMTV), and Indonesia (MNC Music), and the panel of judges will include one person from each country. The judge from Japan will be none other than GACKT. He commented, “It’s a good opportunity to meet a new talent in Asia, and I am enjoying it. If I find a good one, I may help produce the contestant….”