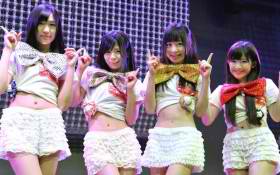 If you’ve been following the Nikkei 225 index – that is, Japan’s stock market average, similar to the Dow Jones Industrial Average – it might be because Prime Minister Shinzo Abe’s aggressive fiscal policies have been improving Japan’s economy rapidly, and maybe you’re interested in that – but surely not because it helps you decide what to wear today. But this is exactly what the new J-pop concept idol group Machikado Keiki Japan is doing – the four young girls in the teen vocal group base what they wear on how the Nikkei Index is doing. But it gets better — or worse, depending on your perspective – than that.

This idol group – a phenomenon that is quite famous and ubiquitous in Japan – is made up of very young girls from 16 to 23, and their unique contribution to the Japanese pop scene is that the length of their skirts grows shorter and shorter as the Nikkei index improves. If anything, this would surely be an added impetus to all those salarymen to do their best and give their contributions to the Japanese economy, if only to, err… see how short skirts can go? To this effect, Kanon Mori, Yuki Sakura, Hinako Kuroki and Jun Amaki – members of the new girl group – have been following the stock average obsessively since Prime Minister Abe took office in December. The name of their group, Machikado Keiki Japan, translates roughly to “economic conditions in the streets of Japan”, and the wardrobe changes have been numerous as Japan’s index kept surging.

“We base our costumes on the price of the Nikkei average of the day. For example, when the index falls below 10,000 points, we go on stage with really long skirts,” Mori explained. At above 10,000, they went for mini-skirts. And with the Nikkei index ending above 13,000 on the day of the interview, the four went without skirts altogether, choosing to go with lacy shorts. If one remembers right, the bubble economy saw Japan’s index reach unimaginable heights in the 1990’s, the index averaging at around 38,000. What was the group’s opinion of that, and how would that affect their wardrobe? “The image I have of the bubble economy in the ’90s, is people dancing around and exposing their body,” said the 17-year-old Amaki. And we will let that comment stand on its own.

The absurdity in this – and surely someone else other than me sees it – is not only are these ladies quite young (the youngest at 16, and what if Abenomics pushes the index to 20,000? What then?), but that apart from the daily index level which is immediately available on the Internet, they really don’t know much about economics, do they? This direct correlation between the length of their skirts and the Nikkei average is a non-sequitur at best, but don’t think that this at all discourages their fans – a majority of them part of the Japanese male population aged 16 to 40. In fact, one would not dare imagine how many Japanese men right now are praying – and working hard, mind you – to get the economy better. And might the Japanese economic situation be all the more improved because these young girls? I’d hate to say “yes”, but this is Japan. Things that float the boat here come in different shapes and sizes – and lengths of skirts, too.

Seiyuu fans of both sexes have come together to vote for the voice actors and actresses with the voices they find most pleasing to the ear in this unusually balanced ranking…
The ranking, together with signature roles:
( Collapse )

Do you agree with this ranking? 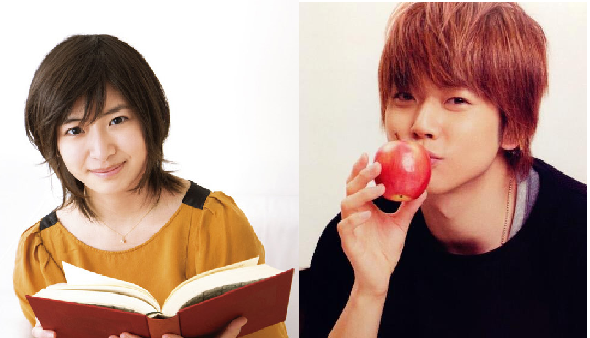 On April 3rd, NEWS member Masuda Takahisa’s starring stage play “Strange Fruits” reached the opening day at the Globe Tokyo, and before the performance started, Masuda and Minamisawa Nao, who plays as the heroine, attended the press conference.

As the two would show a love scene together in the play, Minamisawa was asked how she would feel about playing the scene in front of Masuda’s fans. She first looked confused, saying, “Hmm…”, but Masuda backed her up with, “You don’t have to worry since my fans are all nice.” Then Minamisawa showed a smile and said, “I want them to see it, while they imagine themselves in my position.”

“Strange Fruits” marks the third starring stage play for Masuda followed by “Ame no Hi no Mori no Naka” (2009) and “Haiiro no Canaria” (2012), and in the play, Masuda plays a cruel filmmaker, which differs from his usual image. Masuda talked about how he built up his body by swimming, and Minamisawa also revealed that Masuda brought weight training tools to the rehearsing room. Masuda said, “I’m being stoic. For the stage play, I had TOKIO’s Matsuoka-san, so I didn’t have to do anything, but this time, I have to be the leader.”

According to Masuda, his fellow members are planning to come see the play. He said, “I want them to come secretly without telling me the exact day since I would feel awkward.”

here is the video of the press conference: 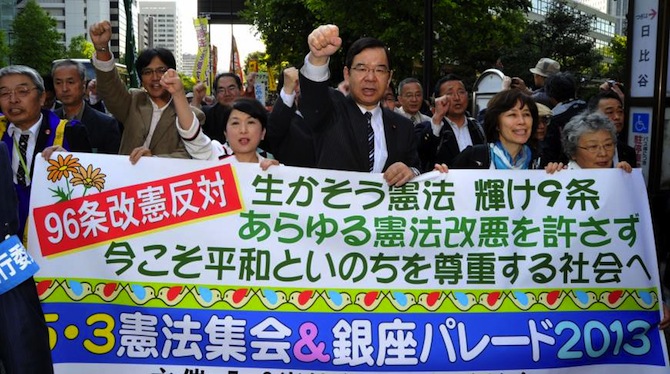 Japanese Prime Minister Shinzo Abe might be set on revising the “pacifist” Constitution – Japan’s supreme laws written after World War II which according to Abe is tainted by influence of the U.S. occupation of Japan – but those who are opposed to his proposed revisions were determined to make their voices heard as well. Hundreds of Japanese, a mixture of young and old, gathered in the streets of the Ginza district in downtown Tokyo to peacefully protest calls by Abe to amend the country’s current constitution, fearing that this will give the government more power to undermine civil liberties.

The protesters – members of opposition parties, labor groups, religious organizations and even private individuals – all marched out on Friday starting from a park near the Imperial Palace through the Ginza shopping district, chanting words of opposition against the determined efforts of Abe’s ruling Liberal Democratic Party (LDP) to amend the constitution, starting with Article 96, which currently dictates the requirements for pushing constitutional revisions. Prime Minister Abe recently stated that he wants to change the requirements, currently set at a two-thirds approval in both houses of parliament before the issues are put forward for a national referendum, to a majority vote in both houses of parliament.

Activists and scholars have all voiced their fears, the same fears that the protesters are chanting about, about the revisions which could lead to a restrictive society not recognizing freedom of expression and diversity of opinions. With Abe’s recent nationalistic acts, some have said that the LDP may be headed towards an authoritarian Japan, one that would negate universal human rights. These assumptions are for now, mere guesses at best. But Abe’s main target, the Article 9 revision, calls for a stronger role for the Self Defense Forces, probably elevating them to a full military organization. This, to some, are signals that if Abe pushes through with the revisions, the Constitution might be used to oppress liberties that have come at an expensive cost after the Second World War.