Around 200 billion yen of public money earmarked to help people hit by Japan’s 2011 quake and tsunami has been spent in areas unaffected by the natural disaster, the government admitted Monday.

Projects ranging from counting sea turtles on semi-tropical beaches, to the promotion of cheese and wine events hundreds of kilometers from the disaster zone benefited from the largesse, a report said.

While there is no suggestion of corruption, the admissions are an embarrassment for the Japanese government, which has previously acknowledged the country’s controversial whaling program was being supported by disaster money.

The Asahi Shimbun, a major daily newspaper, surveyed local authorities around the country to find out what happened to the 200 billion yen Tokyo set aside in 2011 for job creation after the disaster.

It said 108.5 billion yen was spent in 38 prefectures that were outside the stricken northeast, where 97% of people employed with the help of the money were not evacuees from the disaster zone.

I've loved this show since the first showing. Seriously the two best got record deals. Love Chris' voice so much. And Nicholas' blog is a really, really good read. He's going to write some crazy good songs. There's so much more to write about them but I saw that there was an article earlier so I figured I'd give a little update!

Perfume is an electro-pop girl group from Hiroshima that formed in 2000, consisting of three members; Ayaka Nishiwaki (Aa-chan), Yuka Kashino (Kashiyuka) and Ayano Omoto (Nocchi) who have had continuing success in the Japanese charts since their breakthrough hit “Polyrhythm” in 2007. Particularly notable for their futuristic, robotic, doll-like style and well-choreographed dance moves, Perfume seek to take their infectious energy overseas on their first tour to Europe in July this year (only their second time to tour outside of Japan). We spoke to the trio as they prepared to travel to Europe and meet their British fans for the first time.

You recently performed outside Japan for the first time on your “Perfume WORLD TOUR 1st” around Asia. On this tour you will play in three different European countries. What are your expectations for your concert in the UK?

[Aa-chan] I still can’t believe that there are people in the UK that know about and like us and fans that are so passionate! I want to be able to give something back to those people by showing them a great time and I’m hoping for the same response!

[Kashiyuka] We may receive a different reaction from the one on our Asia tour, so rather than just dancing along with us, I’d like to get people to enjoy and get into the music. Also I’m interested to see if anyone will come dressed up in cosplay!

[Nocchi] What kinds of people listen to Perfume? What types of people will like us? I’m looking forward to meet the fans that are waiting for us.

Source: Embassy of Japan in the UK.

Is anyone here going?

As the population declines, intolerance of children and the noise they make is increasing in a society growing less accustomed to hearing them, some child care experts say.

While convenience stores blare electronic greetings and political candidates shout through high-volume megaphones at train stations, day care centers are putting up sound barriers to muffle the din that toddlers make, and sports clubs are restricting the times that youngsters can play outside to avoid upsetting the neighbors.

Child care experts and politicians have voiced concern that this creates a self-perpetuating problem: Despite the falling birthrate, it is seen as less acceptable for parents to expect nonparents to put up with inconveniences caused by their offspring.
( Collapse )

Kyoto Animation streamed the Rin Matsuoka version of the second promotional video for its July television anime Free! on Tuesday. The video showcases Rin, the rival of the main character Haruka. Rin had gone abroad to train in swimming, but his personality completely changed by the time he had returned to Japan. He often perplexes his former teammates.

The anime's official website also posted a voice sample of Rin by Mamoru Miyano and two Twitter icons. In the voice sample, Rin introduces himself as a second-year Sametsuka Academy student whose specialties are freestyle as well as butterfly.

My prayers were too weak, I love that he's a tormented soul, but the shark mouth is kind of a turn off. Makoto all the way! I also fixed the icons in Rei's post. 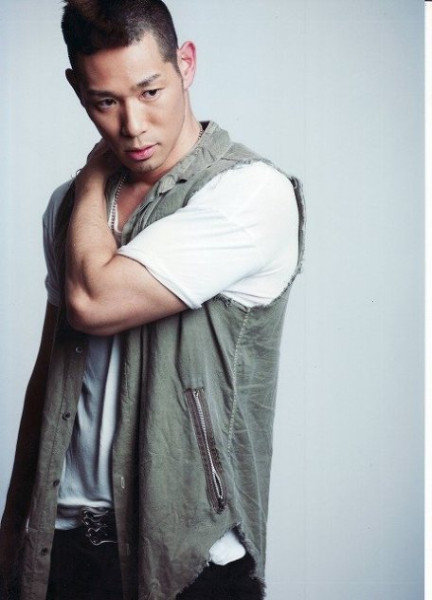 Japanese comedian and former pro-wrestler, Masaki Sumitani, better known by the nameHard Gay, has been struggling to find a new outlet for fame and success. Ever since being outed as a straight man, Hard Gay’s comedic mockery of gay flamboyancy has fallen from popularity in Japan. And, after a severe foot injury in July of 2009, his wrestling career has also been forced to a close. According to an interview conducted by the online news siteOwarai Natalie, while Sumitani is still interested in continuing work as a comedian, he has decided to revamp his public image. We’re not sure how easy it will be to replace the image of Hard Gay’s tight, leather booty shorts, aviator sunglasses, and frantic hip thrusting that’s been burned into our mind’s eye. However, the comedian hopes that by starting a second career as a professional model he can achieve even greater success as himself and not his character. And hey, if these test shots are anything to go by, we think he may be on to something!

Police in Tokyo’s Kita Ward said Saturday they are searching for a man who hit a customer with a key in a convenience store.

The victim, a male in his 20s, was standing in the convenience store reading a magazine at around 1:30 p.m. on Friday, when the seemingly unprovoked attack occurred, TBS reported. CCTV camera footage showed the assailant walk into the store and hit the victim on the back of the head with a key he was holding in his fist.

The assailant then left the store, followed by the victim, and fled the scene on a bicycle. Police said they are using the store’s CCTV footage to try and identify the assailant and the victim.

For those who have ever wanted to be as pretty as a Sailor Scout, your chance is coming with the new release of a Miracle Romance Shining Moon Power compact.

Bandai Premium goods is getting ready to release a special item aimed at adult fans of Sailor Moon, specifically Sailor Moon R on June 4. Retailing for 3980 yen, the compact will based on the one Serena (Usagi) uses to transform throughout the Sailor Moon R series.

I want the line but I'll probably only get the eyeshadows, lipsticks/glosses and eyeliners and mascara if they come out. Unless they come with foundation in my shade. 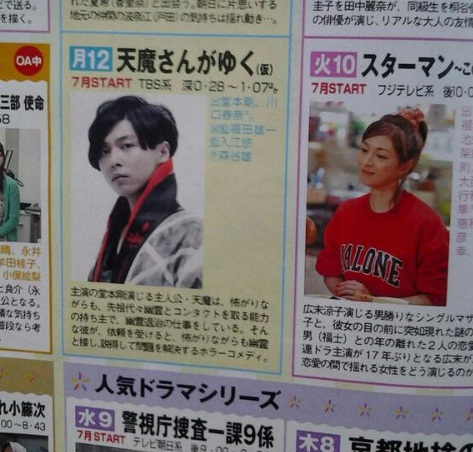 It has been announced that KinKi Kids’ Domoto Tsuyoshi will be starring in TBS (drama NEO) “Tenma-san ga Yuku” for summer season; his first drama in 5 years. He will also be responsible for the opening theme of the said drama.

Domoto will be teaming-up with Yuichi Fukuda, whose last work is “Kodomo Keisatsu”, for this original comedy-horror drama. Domoto plays the reluctant chief of  a “ghost-extermination” company; he has the ability of seeing and contacting ghosts but he is actually a scaredy-cat. A story in which they will fulfill requests by using persuasion to ghosts instead of exterminating/exorcising them.

In addition, Domoto will also be responsible in providing the drama’s theme song, it has been nine years since he did “ORIGINAL COLORS” for “Home Drama”. There is no news whether the said theme song will be released as a single.

“Tenma-san ga Yuku” will air on TBS this July.

The AKB48 senbatsu election is this Saturday and the G+ management team released a statement informing fans how they can send messages to their oshimen.  The messages will be streamed on a special program that airs before the senbatsu election.

I'm so ready for this, not going to get any sleep that night and I hope a lot of crying gifs come out of this. Hmm..I wonder what I should write to Mariko...