It was announced that idol group AKB48 member Takahashi Minami will lend her voice for the Japanese dubbed version of "The Smurfs 2".

"The Smurfs 2" tells a story of the Smurfs teaming up with their human friends to rescue "Smurfette" who is kidnapped by evil wizard "Gargamel", and Takahashi has been chosen to voice the "Smurfette."

She commented, "I'm really happy to receive this opportunity! Smurfs are little elves that bring happiness. I will put my heart into it in order to make everyone happy!!"

In addition, comedy duo Untouchable's Yamazaki Hironari and child actor Igarashi Hinata will also voice act in "The Smurfs 2". Yamazaki will serve as the voice of "Hackus", while Igarashi will be a human boy "Blue".

"The Smurfs 2" is set to open in theaters on August 16th in Japan.

It has been announced that a unit comprised of Hello! Pro Kenshuusei members, Juice=Juice will be making their major debut this summer.

The announcement was made during the release event for their new song "Ten made Nobore!" held at Ikebukuro Sunshine City on June 13. Member Miyazaki Yuka has been appointed as the leader, while Kanazawa Tomoko will serve as the sub-leader.

Regarding the major debut, Miyazaki said, "I always thought that I was not a leader type even though I'm the oldest one, but at the same time, I wanted to be a leader, so I have asked for advice to ℃-ute's Yajima Maimi-san. From now on, I will try my hardest as the leader to improve our group's performance skills." Kanazawa also made a comment, "I'm surprised to be chosen as the sub-leader. I will become the person to support our leader."

Juice=Juice was formed back in February with 6 members; Takagi Sayuki, Miyamoto Karin, Otsuka Aina, Uemura Akari, Kanazawa Tomoko, and Miyazaki Yuka, as a unit from Hello! Pro Kenshuusei. They made their indie debut in April with "Watashi ga Iu Mae ni Dakishimenakya ne", and have released 3 indie singles until now.

Earlier this week, the 2013 JOYSOUND ranking for the first half of the year was revealed. At no. 1, is air band Golden Bomber. Their hit song
Memeshikute charted for 36 weeks. It has taken over last year's hit song, Heavy Rotation by AKB48 which is now at no. 7 on the list. Please look at the list below for song ranking, artist ranking and category ranking.

The scandal became public in May when Josei Seven reported that Yaguchi’s husband, actor Masaya Nakamura, 27, had come home one day in February and found Yaguchi in bed with Kenzo Umeda, a 25-year-old model.

Nakamura and Yaguchi have been living separately since then and their divorce was finalized on May 30.

Yaguchi made a vague apology during an appearance on a TV variety show on May 23 but has dropped out of sight since, claiming that she is suffering from acute gastroenteritis. Meanwhile, Umeda deleted his Twitter account, as well as his personal blog.

At a rehearsal for a 45th anniversary concert on Wednesday, Wada was asked by reporters if she had any advice for Yaguchi. “First, she needs to issue an apology for causing trouble,” Wada said. “Just sending a fax saying ‘I’m sorry’ is not enough, either. Furthermore, if she has really been sick all this time, then that is a bigger cause for worry.”

The tabloids have been reporting that Yaguchi and Umeda are still seeing each other. “The timing is bad,” said Wada. “If she wishes to return to showbiz, she needs to have a cooling off period. Her management will decide that, not her, so she can’t run around doing as she wishes and expect to resume her career. It is not as if she broke any laws but she has ignored the rules of showbiz.”

Japan’s human rights envoy to the United Nations was facing calls Wednesday to quit over a video which showed him shouting at fellow diplomats to “shut up.”

YouTube footage of the incident at the U.N. torture committee in Geneva has provoked a storm of criticism on the Internet, with demands that ambassador Hideaki Ueda be recalled to Japan.

Blogging Japanese lawyer Shinichiro Koike, who said he was at the session, explained that a representative from Mauritius had criticized Japan’s justice system, which does not allow lawyers to be present during interrogation.

Ueda, who appears to be not entirely at ease in English, jumps to his country’s defense.

“Certainly Japan is not in the middle age,” he says on the video. “We are one of the most advanced country in this field.”

Koike writes that this comment provoked some giggling, which cannot be heard on the video.

“Don’t laugh! Why you are laughing? Shut up! Shut up!” the ambassador shouts.

“We are one of the most advanced country in this field. That is our proud. Of course, there are still shortages of course, shortcomings.

“Every country has shortages and shortcomings, but we are trying our best to improve our situation.”

Twitter user spad7u59sambaocnne said: “We should replace such an incompetent old man who is only causing harm.”

Minecraftor said: “It is a problem that tax money is being used to feed a diplomat who is audacious and arrogant, who is only feeding his ego, despite his impotence.”

The Tokyo Shimbun newspaper labeled it a “strange incident” in its report, and noted that it came after a series of gaffes by high-profile politicians that have upset other countries.

International pressure groups say Japan’s criminal justice system is weighted in favor of prosecutors and relies too heavily on confessions, many of which are extracted under duress.

Campaigners say the long detentions allowed without charge—around three weeks—and the style of questioning contribute to an artificially high conviction rate of around 99%.

この腕はババアの腕だぜ
This is a granny's arm

炎上マーケティングかよ
Flame marketing, or something?

なんだこれ？
What the heck is this?

業界のお偉いさんだったりして
What if it was an industry bigwig

ババアの接待しないといかんのか
大変だわ
Must be tough for him, having to entertain grannies

ジャニ激怒まずくないか？
Won't Mr. Johnny be fuming mad about this?

これは恥ずかしい写真
Well now, this is embarrassing

But it doesn't look like a beauty at all, just some old hag LOLOLOL

Twitterみたらジャニヲタが「これ手越くんじゃないよね？」って現実逃避してて笑った
LOLing at Twitter, these Jani-wotas seem to be running away from reality saying "This isn't Tegoshi-kun, right?"

お母さんに決まってるだろ！
That's his mom, no doubt about it!

ラブホテル前でイチャついてるとこも撮られてたしヲタと寝て寝顔を流出してるし
手越にとっちゃよくあること
He was shot flirting before entering a motel, and his sleeping face was shot by an otaku. Happens a lot to Tegoshi.

おばさんだとしたらよほどテクがすごいとかか？
If it were an old lady, could it mean that she has amazing bed technique?

ジャニの枕営業ってゲイの政治家とか業界人だって聞いてたけど
こういうおばさんともしなくちゃいけないのか
ホストみたいで大変だな
I heard that Johnny's do sexual favors for gay government officials or industry bigwigs, but they also have to do it with old hags like this? Must really be tough for them, they're like male hosts.

クラブなのにババアは無いだろｗ
ただのデブ女
They're in a club so this isn't a granny LOL
Just some fatso.

こいつらはジャニーさんに抱かれてるからな
ジジイに抱かれた奴ならオバサンなんて余裕
Well, these guys have all slept with Johnny-san so sleeping with an old lady is much easier if they've done it with a grandpa already.

相当なヤリ●ンらしいね
アイドルも食われてるとか
I heard he's one heck of a man-whore. He's devoured idols too, right?

ツヤのない髪にダルっダルの二の腕
これが若女だったらむしろ祝砲打つレベル
Non-shiny hair and flabby arms... We'd actually have to celebrate if this was actually a young woman.

AKBも数人食ってるし手越は雑食ヤリ●ンすぎるんだよ
He's also done it with a number of AKBs, right? Tegoshi is one helluva stud.

さすがジャニのブラックバス
That's the black bass of Johnny's for you

40代の腕だな
どこかの女社長で飼われているんだな
Those look like the arms of a 40-year-old. Could this mean that he's the pet of some female company president or something?

顔は見えんけどおれもこのくらいのおばさんなら余裕で食えるけどね
手越しはアイドルも食いまくれるだけの顔を持ちながらなんでも食うってところが何かすごい
I can't see the face but I can easily get it on with a woman like this too.
But I'm amazed at Tegoshi, he possesses a face that can devour the likes of idols but he decides to do it with anyone he pleases.

ジャニヲタババア達「私達にチャンスがある！」
Old Johnny's fangirls: "I have a chance  with him!"

idk about this..but that pic is hilarious lawl 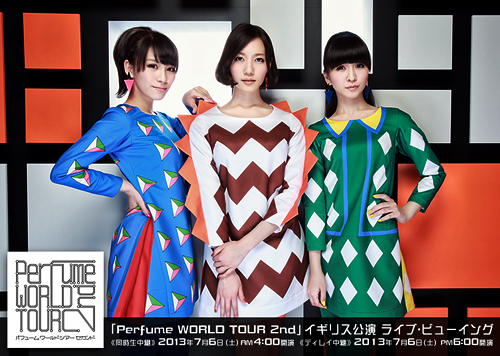 During the Great Britain stop of Perfume’s upcoming WORLD TOUR 2nd tour, fans in Hong Kong, Taiwan, Thailand, Singapore, and Los Angeles can also see Perfume through live viewing. It was announced earlier that Japanese fans can catch the live viewing through select cinemas, however, further details with regards to international fans are yet to be revealed. Those who are interested, please keep an eye on the Live Viewing site for more information regarding venues (the blue button brings up a pop-up list of participating venues). Of course, please note that schedules will vary country by country.

Article at natalie.mu (in Japanese): [x] 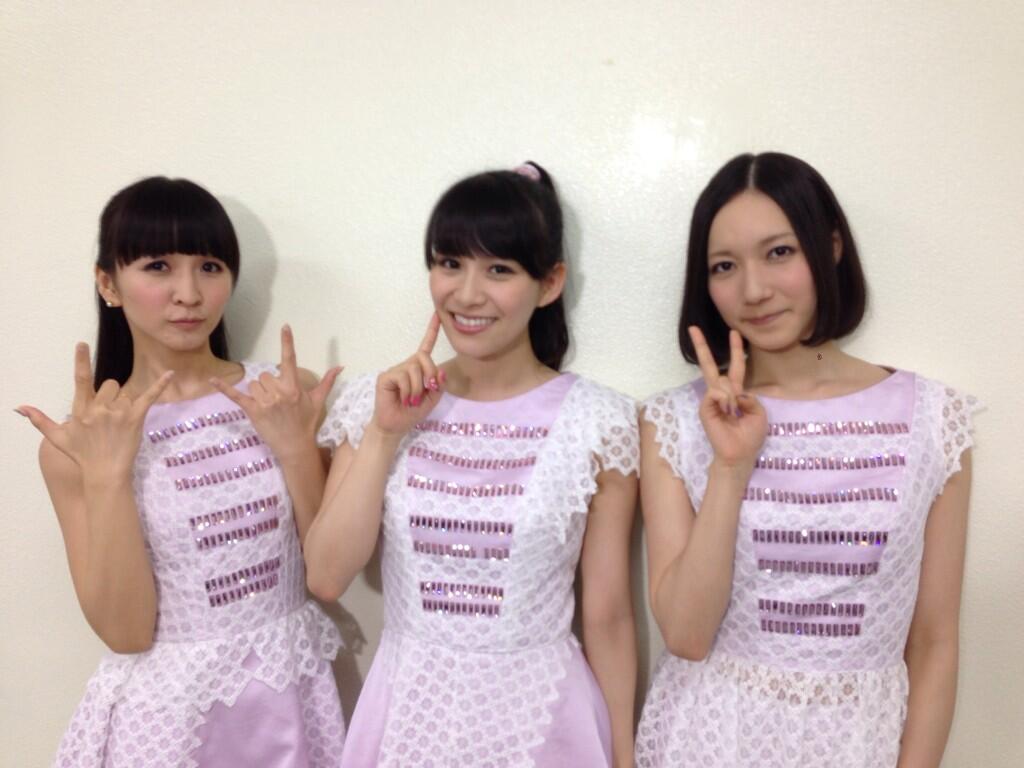 ( Collapse )
Source: [x]
The Daijobanai dance is SLAYING. And the WE WILL ROCK YOU was just too damn cute. <3

It has been revealed that former AKB48 member Masuda Yuka will make an appearance on TV Tokyo's upcoming drama "LIMIT".

"LIMIT" is a live-action drama adaptation of Suenobu Keiko's popular manga. The protagonist is a high school girl named "Konno Mizuki". One day, Mizuki's class goes on a field trip, but on the way there, their bus falls off a cliff in the mountains. Only five girls including Mizuki survive the accident. They are injured, lost in the mountains, and no one is coming to rescue them anytime soon. Pushed to their limits, the girls are forced to switch into survival mode and to lay bare their innermost feelings.

Last month, it was already announced that actress Sakuraba Nanami would play the protagonist, and three of the four other girls would be played by Tsuchiya Tao, Kudo Ayano, and Yamashita Rio.

Now Masuda has been added as the fifth girl who survives the accident, named "Usui Chikage". Regarding her role, Masuda said, "I felt a little anxious about if I would be able to play this role when I read the manga, as the character is like the exact opposite of me. However, after the filming started, I feel that I could become Chikage-chan little by little while getting help from other cast members. I hope the viewers could see Chikage being similar to the original manga."

Other cast members announced along with Masuda include, Suzuki Katsuhiro (as "Hinata Haruaki", a classmate of Mizuki), Kubota Masataka (as "Igarashi Wataru", assistant teacher of Mizuki's class *original character for the drama), and Watanabe Ikkei (as "Konno Hirokazu", Mizuki's father).

I did not know Limit was getting a drama. Great manga by one of my fave mangaka ever, you might know her as the mangaka of 'LIFE', which was also made into a drama. Glad to see Yuttan getting a role, if it follows the manga she should get a decent amount of screentime since the cast is so small.
Collapse